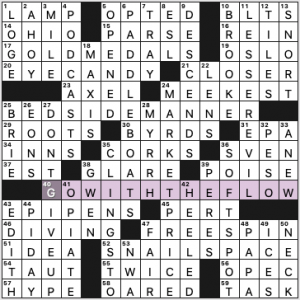 I don’t always head to the Times’s puzzle page with great anticipation, since 9 pm is the end of a long day and who is truly excited about fulfilling an obligation (volunteer blogging!) at that hour? But it’s a treat to find Robyn’s byline awaiting me, because then I know there’s a 99% chance I’ll like the puzzle quite a bit. Thank you, Robyn! Keep doing you.

Nice to see Olympic GOLD MEDALS near the top as we approach the Tokyo opening ceremonies in two weeks. (With … not much in the way of a live audience in Tokyo. But the world can see the spectacle on TV. And the geography/language/EYE CANDY aficionado in me always relishes the Parade of Nations. Will the Tongan tae kwon do competitor be back, carrying his nation’s flag and hopes? Tune in to see!

Other fave fill: GO WITH THE FLOW, BEDSIDE MANNER, EPIPENS, SNAIL’S PACE, PI DAY, “DON’T GIVE UP,” PODCASTS, PADDLE BOATS, MARKET PRICE, the LESSER EVIL, and I’ve got a soft spot for SOFT SPOT. Plus there’s GWEN Ifill (plus another woman in journalism whose name was unfamiliar to me, BROOKE Baldwin).

Matt Jones’s Jonesin’ Crossword, “Get It Together” – Derek’s write-up 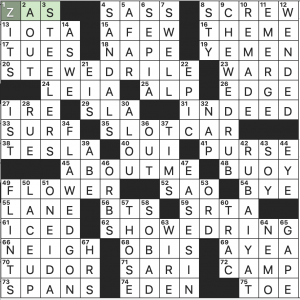 It is finaly time for the write-up dealing with this week’s Jonesin’! There is something going on here, so a full update will be coming early next week. But here are the theme entries:

This may (or may not!) give you a decent idea of what is going on, as there is clearly a word being added to some common words to make the theme entries. Whatever is going on? As mentioned earlier, lets treat is as a contest puzzle. Full explanation coming early next week! 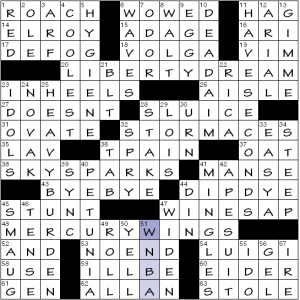 I’ve got to suspect that the original inspiration for this theme is the felicitous combination of the Indiana and Atlanta teams for Fever Dream, even if it didn’t end up in the final product.

Since I’m not particularly familiar with the teams, I needed to rely more heavily on crossings before I could complete the theme entries. The combination of that and some more-oblique-than-usual clues among the ballast fill resulted in a relatively protracted solve for me.

We have a debut today, and it’s an impressive one. The revealer is CROSSWORD (65a, [This puzzle, or either answer in each pair of starred entries?]). The other theme answers are paired off (as indicated by the number of stars in the clues), and not only do they cross each other, but they are also words that can follow the word “cross.” Further, each crossing occurs exactly in the middle (hence the title), and when you highlight them (as I did in the picture), each pair forms a cross—not the Christian symbol, but a generic plus-sign shape.

Very nice! I love the multiple layers to the theme, and once you see the three crosses, it’s all the more impressive. This isn’t the type of grid you normally see in a debut. This took some skill and time to put together and to keep the surrounding fill clean.

Beautiful puzzle and a wonderful debut. 4.25 stars from me.

Theme: Each themed answer includes WAY at the beginning and ending of the word or phrase. (Thanks for Craig in the comments for pointing this out!) 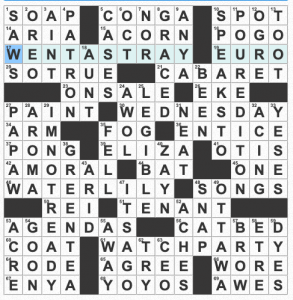 Overall, a solid Friday, with a nice combination of classic answers like OREO and EKE with some creative clues that brought in a few new definitions.

The Inkubator team tagged this as “lightly challenging.” I agree except for one crossing that was a Natick for me – I ran the alphabet until I had it right. The theme and the rest of the fill was delightful – a very nice debut for Anne Rousseve!

The theme answers refer to pop song titles that describe a kind of girl.

and the revealer at 39a [They run the world, in a Beyoncé hit…and a hint to 18- and 59-Across and 4- and 40-Down]: GIRLS. Solid, consistent, and accessible – that all goes along with “lightly challenging.” It was also a lot of fun.

My sticking point was the crossing of 27a [Actress Ruth of “Loving”] and 28d [“NO WAY!”]. I’ve never heard of Ruth NEGGA and GTFO does not come trippingly off my tongue, especially since the O is crossing MOMA, which is clued as [N.Y.C. gallery co-founded by three women]. That’s a lovely thing to learn about the Museum of Modern Art, except that I don’t think of it as a “gallery.” So that whole section made me scratch my head and then bang it against a wall.

What I didn’t know before I did this puzzle: see above re: Ruth NEGGA and the founding of MOMA. The three women were Abby Rockefeller, Lillie P. Bliss, and Mary Quinn Sullivan. I had also never heard of the Tori Amos song.

Today’s puzzle showcases one of the things I love about New Yorker crosswords: their submission / publication process means that we can get really current marquee entries. In this case, the central entry: [Voting-rights and campaign-finance-reform bill blocked by a Republican filibuster on June 22, 2021] for FOR THE PEOPLE ACT. Such a great entry, with a straight-forward clue that still cuts. I liked that a political angle was also taken for DREAMERS: [Subjects of some immigration legislation]. 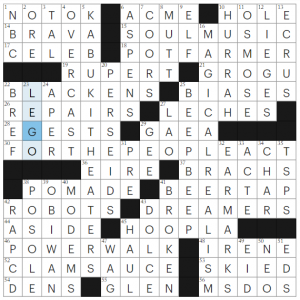 This puzzle was filled with imagery! I love clues that paint a picture in my head, like [Makers of Instant Roads and Jet-Propelled Pogo Sticks] for ACME, [Like a bad day for tanning] for OVERCAST, and [One often depicted with pointy ears and shoes] for ELF. MAGICAL REALISM ([Genre for Salman Rushdie and Isabel Allende]) was another entry that made me smile. Allende’s short story “Two Words” is one of my favorites- take fifteen minutes to read it, if you haven’t before! And I feel like Wyna always has great conversational-y entries, like NOT OK ([“Very uncool”]) and BEEP BEEP ([[“Make way, coming through!”]]).

Now that I’ve been solving puzzles for a couple of years, I try to still think about words that were hard for me as a first time solver. 2019 Malaika would not have known APER ([Copycat]) or EDS ([Publishing bigwigs, briefly]) . And 2021 Malaika still doesn’t know EIRE ([Dublin’s land, to Yeats])– I had EYRE crossing PERSEYDS as an error that I couldn’t catch.

Other entries I enjoyed: