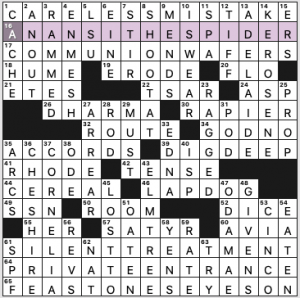 Seemed on the easy side for a Saturday NYT, but that might be because ANANSI THE SPIDER went in with no crossings and opened things up immediately. Thank you, Park Forest District 163, for teaching me Anansi!

Trenton brings us triple-stacked 15s at the top and bottom, and clearly took great care in filling the grid. I really like five of six 15s: CARELESS MISTAKE, COMMUNION WAFERS, SILENT TREATMENT, PRIVATE ENTRANCE, and the aforementioned folkloric arachnic are great. FEAST ONE’S EYES ON feels awkward—would prefer YOUR to ONE’S.

The crossings and middle fill are all pretty darn solid—I dislike OATEN but that’s it in my minus column.

Kitchen appliance problem calls me away from the computer so I’ll sign off here, 4.25 stars from me. 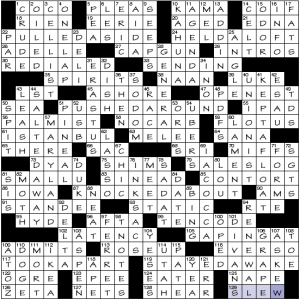 Phrases involving adjectives beginning with a- are reparsed by divorcing it from the word and reading the body as a noun.

I’m not accomplished enough of a grammarian (and a cursory search of the web achieved no insight) to know how to describe the non-negating a- adjectival prefix (or is a combining form?).

As is so often the case, it’s easier shown than described.

A fine little theme. The obvious criticism of the crossword is that a couple of non-theme entries intrude: 45a [On the beach] ASHORE, 107d [Out of kilter] ASKEW. They’re really noticeable. Whereas 113a [Rebelled] ROSE UP merely insinuates the alternate form AROSE.

We saw themelesses throughout June (every week!), but when one didn’t appear last Saturday, I thought they had come to a permanent end. So a big surprise to see one today from Erik Agard- A Tournament Puzzle from the KCUR 89.3 competition. 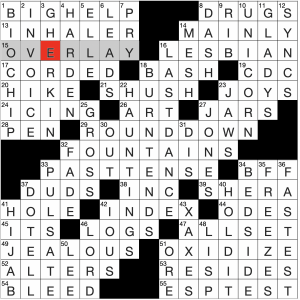 THEME: None (with a little wink to Kansas City in the middle)

Let’s start off with the semi-quasi-not-really-mini-theme:

If those clues seem oddly geographically specific, it’s because KCUR- the host of the tournament for which this puzzle was constructed- is out of Kansas City. It is the local NPR station.

Really, everything in this themeless was spot on. Lots of fun fill with scrabbly letters to uncover (yet it never felt forced).

I hadn’t known that this tournament existed before completing this puzzle. I’m sure it was advertised and I simply missed it. Now I have a post-FOMO feeling. That doesn’t quite make sense… but, ya’ know what I mean. You can read about how you could’ve signed up here.

I don’t know about any of the results. Anyone have a link to that? Please feel free to share any other details. I clicked around a bit and nothing jumped out.

Anyway, this was awesome. 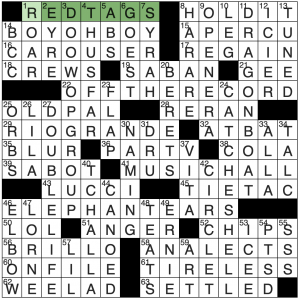 This puzzle took me longer than the Stumper did to complete! That doesn’t happen that often. I am not sure what caused me to have such issues, because there isn’t anything too hard in here. Maybe the “Stumpers” ARE actually getting easier. Or maybe I am getting faster and slower all at the same time! I also am not as familiar as I should be with Jamey Smith’s puzzles. Let’s go with that theory! 4.4 stars from me.

A new Panda magazine comes out today, so there goes my afternoon! 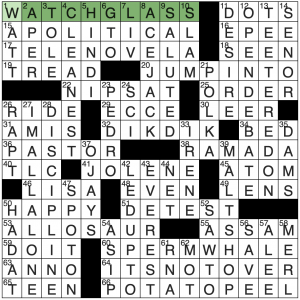 Solving all these Greg Johnson puzzles over the years has finally paid off! I found this one super-easy for some reason! Yes, I did get slightly stuck in a couple of areas, but I was surprised when the timer said just over 6 minutes! Whatever the reason, I’ll take it! Another stellar puzzle from Greg this week. Kudos! 4.5 stars from me.

Everyone have a safe and healthy week! Enjoy some tunes while you’re here: 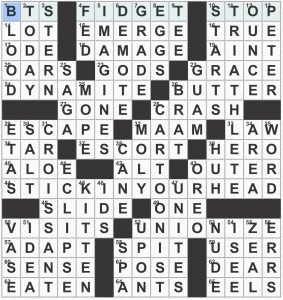 Super clean fill, and a quick, steady solve. There were some nice bonuses, especially 28d
and 11d. Minimal crosswordese, with little more than OREO and I SEE to make me (mildly) groan. Not much wordplay in the clues, but this shortage is earned back through ease of solving.

One thing to note about today’s puzzle is that it does not include rotational symmetry; this is by no means a must-have for a successful crossword, but newer solvers may notice it looks a bit different than other grids they may have seen.

The theme material was a bit sparse, with only two relevant answers in addition to the relatively clunky revealer. The theme itself was straightforward enough, though—the tunes to 24a and 26a might STICK IN YOUR HEAD, and, individually, both DYNAMITE and BUTTER are types of sticks. Agard also includes BTS (the band behind the bops) in the 1a position.

1a. [Band also known as the Bangtan Boys, with hits such as 24- and 26-across]––For those of you who haven’t heard of BTS, they are a group worth knowing. With K-Pop idols solidly rising in popularity, BTS has undoubtedly benefited from a positive critical reception.

4a. [Make nervous movements]––Though it’s clued as a verb here, I’ve recently started to see FIDGET used as a noun, as a shortened version of fidget toys. I’ll be interested to see if that trend is here to stay!

52a. [What workers might do for better working conditions]—the answer to this one is to UNIONIZE. Fun crossing here too with 47d: UNITES (or, in other words, what unionization might accomplish).

11d. [Competitor who swims, bikes, and runs] is a TRIATHLETE. With the Tokyo Olympics rapidly approaching (and the triathlon beginning in July 26), this entry seems fitting.

41d. [Solar or lunar event] — In case you were wondering, the next lunar ECLIPSE is November 19, 2021. Mark your calendars! (If, on the other hand, you’re more inclined toward edible crescents than celestial ones, look no further than next door’s 31a: CROISSANT.)