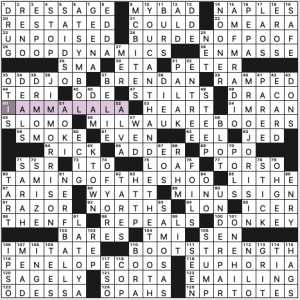 The theme entries take familiar phrases, remove an R sound, adjust the spelling if needed to make another real word, and clue the resulting goofball phrase. The puzzle’s title is “No Ruse,” which feels off to me. It sounds like “no roos,” with the “roo” sounds changed to “oo”—but “no ruse” isn’t at all a familiar phrase to me. Here are the themers:

While it is impressive that Ashish got the theme layout to work this way, I’m not sure the various trade-offs in the grid make it worth the effort. EDDA and SMA in the opening corner, for example! Stacks of 6s and 8s flanking theme entries is an achievement, but I don’t always want to forgive the NOLO and ICER and ‘ENRY and OPAHS sort of fill we find in this grid. Are NPR TOTES a thing?

There is a good bit of sparkle here, though. JIM MORRISON and his anagrammatic nickname, MR MOJO RISIN, feel like they should be anchoring the theme, but I think they’re extraneous here. I AM MALALA, NERF BALLS, SMIZE, K-TOWN, SAMOSAS, and the supervocalic word EUPHORIA pleased me.

THEME: Phrases that mean “move around” are clued as if they no longer mean that. 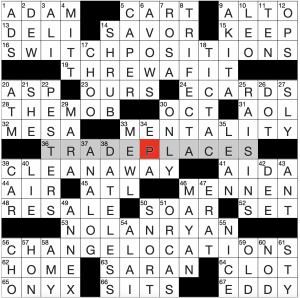 A lot of my favorite solves feature just three strong theme answers. It usually leads to good flow and satisfying fill. This one is no exception. I solved steadily from north to south with very few snags. at 3:30, my solve time was definitely far south of what it normally is.

A bit of a different construction with the grid spanners in rows 3 and 12. Each of the themers is parallel to and abutting the grids longer fill: THREW A FIT, MENTALITY, CLEAN AWAY, and NOLAN RYAN.

This was a great puzzle. It was a nice balance of clues I flew through and clues that made me skip through until I had enough crosses. Also, as a quick aside – the new app format for the USA Today puzzle is great!

The theme this morning was an unexpected one: one of the three United States Department of Agriculture (USDA) grades of beef was included in the first part of the answer. The theme answers were as follows: 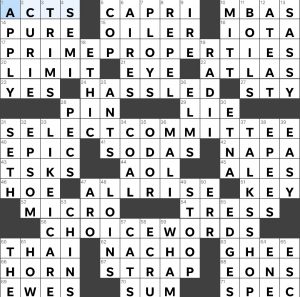 I do crosswords to learn something, and I certainly didn’t know exactly how the USDA defines them. If you’d like to learn more about prime, select, and choice cuts for your summer barbecue, the Department of Agriculture has posted a blog post on the subject for your post-crossword pleasure.

Structurally, this was a grid that utilize 5-letter clues well, both across and down, letting words like EPSOM (32d [“English salt town”], MICRO (52a [“Prefix meaning ‘very small’”], and TRESS (54a (“Lock of hair”]) stand out. In some cases, these crossed with the longer down clues that bordered the middle and lower sections of the puzzles, making 33d [“‘Whatever!’”] (LIKE I CARE) and 37d [“Chats about business matters] (TALK SHOP) strong supports for the across fill.

Other clues that piqued my interest:

5a [“____ pants”] – I’ve been listening to a novel in which the first part takes place on CAPRI, so the ankle-length pants were not my first guess here, but ‘tis the season!

15a [“Crude-carrying ship”] – I struggled with this one until “crude” and its hyphen kicked in to make me filL in OILER. I loved this clue because of the red herring in the wordplay. “Crude” made me think of an antiquated boat until the hyphen clicked, and I went immediately to OILER.

44a [“ISP whose greetings are voiced by Elwood Edwards”] – I had no idea on this one, but I love this fact about AOL and its signature “You’ve got mail.” A fun fact is that Edwards also lent his voice to an advertisement to the Meg Ryan/Tom Hanks-classic You’ve Got Mail.

38d [“Heaviest fencing weapon”] – I used to fence, so I always get a little giddy when it’s mentioned in puzzles. I’m especially excited this morning to see EPEES this morning since it’s the type of weapon I used. You have to love the three-E combo in the word too.

58d [“Color that’s an anagram of ‘cure’”] – ECRU makes me think of Moby-Dick through a convoluted process involving The Art of Fielding. I thought that the use in the puzzle today was a good differentiation from the various shades of beige clues that could have been used, even if it perhaps shortened the solve time.

Overall, definitely a solid Sunday puzzle, one that rose to the occasion with everyone else in 47a’s “Everyone please stand” (ALL RISE). 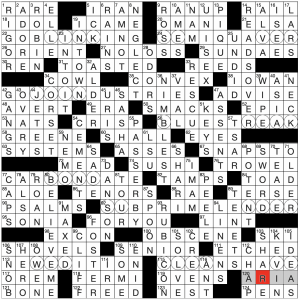 I’d be lying if I said hidden-word themes are my favorite. They’re not, especially in a 21x grid. So I solved this mostly as an enjoyable themeless. I didn’t really see the “separate” words until post-solve. A lot of the themers were unfamiliar to me (or at least it’s been a long time since I’ve heard them). Totally forgot the title GOBLIN KING, despite knowing David Bowie’s role as Jareth in the film Labyrinth (I saw parts of that movie relatively recently… it doesn’t hold up as well as my memory thought it did). SEMI-QUAVER is very strange to me. BLUE STREAK and GOJO INDUSTRIES were also new.

For no good reason, the SHARE/ARIA crossing stumped me for a long time. Really had trouble seeing ARIA as the entry for [Single track?]. I get it now (in the “yeah, okay, I guess so” sense)… it’s a “track” performed by a soloist.

A solid puzzle for introducing this theme type, even if it’s not entirely my cup of tea.

Theme: Herbs and spices (only eight, not eleven) are scrambled inside (mostly) well-known phrases. 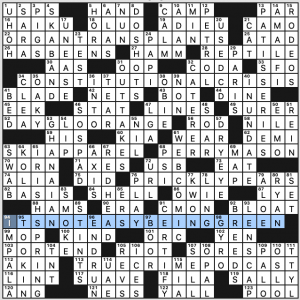 On the whole, impressive finds of long words inside interesting phrases. It’s curious that the editorial team chose not to use circles for this puzzle, when I think it would benefit the solver—especially newer ones.

Names to know because you’ll no doubt see them again in crosswords, or because, you know, you want to be culturally aware:

As I’m sure everyone knows by now, I like wordplay themes. This isn’t one. Each theme answer is the second part of a phrase that starts with a repeated word, and the clue is the repeated word, but only once. That’s the whole deal. Margaret Woodruff is not in our database, so this may be a debut. I hope to see more from her that I like better. 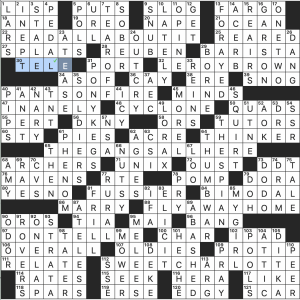 This theme would have felt dull to me even with more up-to-date content. As it is, the fustiness + the dullness = not any fun at all. If I hadn’t been reviewing it, I might not have bothered to finish it.

A few other things:]

What I didn’t know before I did this puzzle: see above re: SWEET CHARLOTTE. I also did not know that there is a wasabi OREO flavor in China. Isn’t wasabi Japanese?