The AVCX’s submission window for last Wednesday’s contest puzzle from Paolo Pasco and BANKSY* is closed. Here’s the answer! 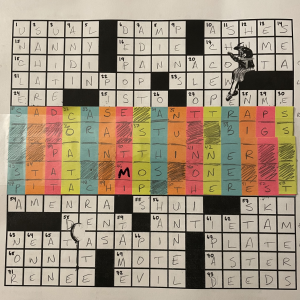 Last week’s AVCX was only available as a PDF, and in true Banksy style, the middle was graffiti’d over with the word SOCIETY.  I remedied the situation by solving that part of the grid in silver sharpie, but for maximum readability, made a mixed-media composition before uploading the screenshot at right by applying some post-it notes, graphite, and packing tape.  In addition to tagging the grid in his typical style, Banksy has also tagged the clues in typical fashion.

Various clues in the grid are italicized, with a revealer smack dab in the middle of the graffiti’d section:

That revealer is 39A’s PAINT THINNER – “Stuff that could clean up the center of this grid, as well as the answers to the six italicized clues”.  Using this as a suggestion to “thin” the letters P-A-I-N-T from the italicized answers, you’re left with the meta answer:

COLOR SCHEMES, which is a perfectly “pithy way to describe [Banksy’s] little pranks”

Solving the puzzle didn’t take too long, but this was a really fun presentation for this idea, and all props to Paulo and Ricky Cruz, who provided the Banksy-esque art.

This is what plays in my head every time I see “JFMAMJJASOND”, as in “JFMAMJJASOND makeup, for short” at 45D.

Elsewhere in the grid, it was nice to find Rita ORA (who closes out the podcast Who Weekly every week with their “What’s Rita Up To?” segment), RENEE Elise Goldsberry, who’s “Angelica to Philippa’s Eliza” and also fantastic on Girls5Eva, PISAN, COAT AND TIE, and TUNNEL (“You can dig it!”)

my roommate bansky is at it again. he made coffee and said he put something inside that would "REALLY wake me up" pic.twitter.com/DRD0uCneHU