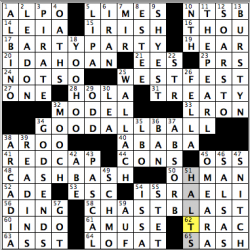 Hello everyone! Hope you are all doing well lately and continuing to be safe — and hydrated.

We have some rhyme time with the theme entries, in which puns are made when words for different types of celebrations are paired with celebrities whose names rhyme with the types of wingdings.

One of the entries in today’s grid made me think back one of my ODD (29D: [Peculiar]) quirks that I could never understand, which is YOO-HOO (18D: [Attention-getting yell]). I used to love chocolate milk, whether it be the in the cartons the school cafeteria would provide or creating my own using milk and chocolate syrup. For whether reason, I always turned down/never requested “Yoo-hoo” chocolate milk on every pass. Maybe the yellow label/packaging made me think the liquid inside of it was inferior? (The boxes of chocolate milk from the cafeteria were brown.) Don’t know. That said, thanks for bearing with me and my musings about why I was so quirky as a kid.

Is there anyone who’s in the category of “I’ve read multiple Steinbeck books but not THE PEARL” that I currently reside in (11D: [1947 John Steinbeck novella])? A reference to African geography/culture always makes me bump up my enjoyment level of a grid, and that’s the case here with ABABA (40A: [Addis ___, Ethiopia]). Loved the fill of GODSENDS as well (34D: [Blessings]). But the best fill of the day I’m saving for the very, very end of the blog…

“Sports will make you smarter” moment of the day: PIRATE (3D: [Pittsburgh player]) – I saw an interesting statistic as I was covering a New York Mets game in person yesterday. A member of the Pittsburgh Pirates has won the National League batting title on 25 occasions, more than any other team in the league. (Along with eight-time batting champion Honus Wagner and four-time winner Roberto Clemente, Matty Alou, one of the famed Alou brothers that all crossword fiends know by now, won a batting title while with the Pirates in 1966.) And going into last weekend, the player who was leading the National League in batting average so far in 2021 was a Pirate, second baseman Adam Frazier. Going into the All-Star Break, which started after Sunday’s games, Frazier is now second in batting with a .330 average, a thousandth of a point behind the Cincinnati Reds’ Nick Castellanos.

ADE (52A: [Citric beverage])/AOK (Just don’t pronounce it as “aid” and we won’t have any problems! Capeesh?) 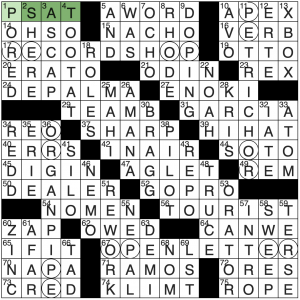 It looks like we have some sort of a crossword rodeo going on here, with the letters in ROPE literally “roping” the ends of the theme answers. Nicely done, but I am still reeling from last week’s puzzle! (See below!) In honor of this week’s Jonesin’, I will try to watch some bull riding next time it’s on TV! 4.3 stars today. 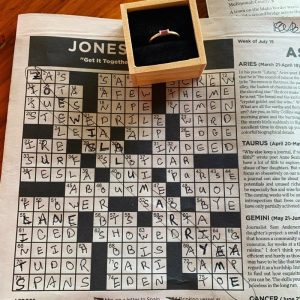 That is not all! Let’s update last week’s puzzle! As you can see in the grid to the left, there was an actual WEDDING PROPOSAL hidden in the grid! Did you notice it? Were you wondering why the letters WED were added to each theme answer? Well, now you know! Words of wisdom: find a mate with a three-letter name so you can make a neat puzzle with an entry like ZOE WILL YOU MARRY ME in it!

They can tell you what happened better than I can. Here is what they told Matt:

“She said yes!
We biked over to Radio Room [a restaurant in NE Portland] on Friday to do the puzzle over breakfast, and she had no clue it was coming.
I actually had to point out her name before she saw it! ?
Thank you so much, it was such an amazing and special experience made possible by you.
She’s agreed to never curse you again for a difficult clue.
The completed puzzle will be framed soon.
Thanks again!”

Wonderful! Many congratulations to the happy couple, and here’s hoping they will solve many more crosswords together in the years to come! 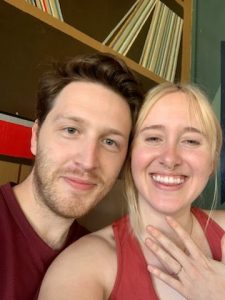 Keegan and Zoë, the happy couple! 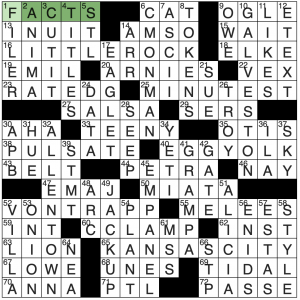 This is a byline I am not familiar with, but Matt is going to take us on a little trip down memory lane by way of music:

OK, maybe my memory isn’t as good as yours; I only know a couple of these. I may recognize them all once I hear them, but I don’t recognize them by the title. But another nice, simple theme for a Tuesday that isn’t trying to hard but still makes an enjoyable puzzle to solve. Now I want to go on a road trip! Nice puzzle, Matt! 4.4 stars today. 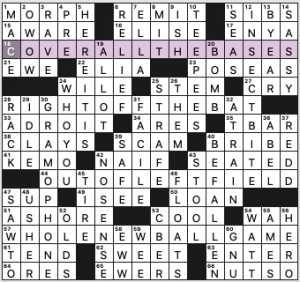 The theme in this 16×15 grid features familiar idioms that use baseball lingo:

Nice! Should be easy enough even for those who don’t care for baseball.

Last weekend, a commenter complained about a crossword that contained the word LESBIAN, saying “More “representation” for LGBTQIA+ today. At what point does representation become pandering and virtue signalling[?]” Elsewhere on the internet, somebody solved the Monday USA Today puzzle and went to co-constructor Amanda Rafkin’s puzzle blog to complain about the gay content, saying “please consider a balance between presenting gay and straight clues.” Looking at this Tuesday NYT puzzle, I didn’t see a single LGBTQ reference. At what point does a lack of any LGBTQ references connote pandering to heterosexuals? Does a fair “balance” consist of one puzzle with zero gay references offsetting a puzzle with, say, 5 gay clues and 73 non-gay clues? If the Tuesday NYT puzzle doesn’t have any overtly heterosexual content, either, does it cease to exist? My advice: Don’t get your knickers in a twist just because crossword editors and constructors are no longer keen on excluding LGBTQ references, which most solvers either appreciate or don’t mind seeing.

Theme: Familiar phrases where the second word can be a synonym of “talent” are re-imagined. 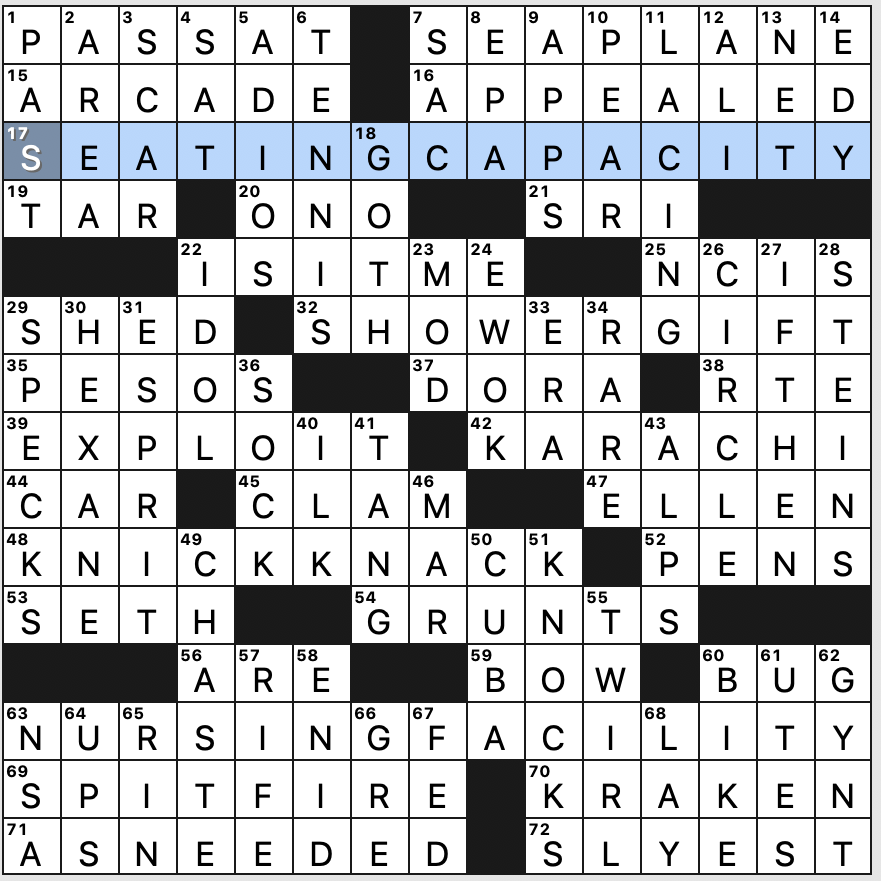 Solid, tight theme. I like that this isn’t just a synonym theme, but that each final word also changes meaning.

SPITFIRE and SEAPLANE top my fave fill list followed by KARACHI, EXPLOIT, KRAKEN, AS NEEDED, and “IS IT ME?’ Nothing much to grumble at beyond the usual amount of crosswordese. I needed most of the crossings for HEXANE, but it’s fair.

Looks like a debut for Elly Chen today! And a great one at that :) Am I correct in my inference that Elly is a relation of Jeff’s?

THEME: One of each of the four seasons can precede both words of a common phrase. 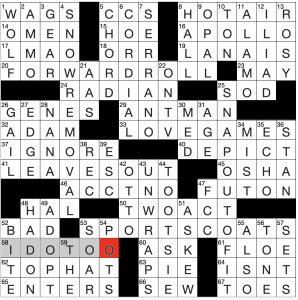 While I don’t much get excited by the “words-that-can-follow…” theme, this one is definitely an exception to the rule. I really like that the seasonal word keeps changing (and in order!) Gives it an edge of cleverness that is often missing from a theme type that has “stale” potential. Well done!

It took me a little while to fully appreciate the title. At first, I thought the season was supposed to be the “post” word. Then I thought “post” was referring to only the second word in the theme entries. Duh. Both words in the entries can go “post” season. It’s a great title. I’m a little groggy I think.

A slightly faster time for me today, as this excellent puzzle practically filled itself in, until I got to the southeast quadrant in particular. Great clues too, even for the ones that stumped me. Tricky theme for me, as the themers were vertical (h/t to Sally Hoelscher’s blog post for today). 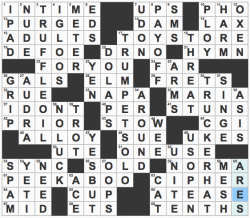 Theme: “TRU-” starts the vertical fill, thus is in the north position of each

Part of what helped me with today’s puzzle was reoccurring fill that I’ve seen recently in other puzzles, including ELM, ATE, DAM, WEE, DRNO, and PER. Nothing wrong with them but clearly some words are common since they fit so nicely in crosswords, especially the limited three-letter words. “Aria” didn’t make an appearance though, which seems to be a very popular fill.

Stumpers: TRUCKERHAT (at a loss until crosses helped fill it in), MID (the paired words through me for a loop), CUP (“medals” came to mind), and RUE (wanted to put “sad”)

This puzzle also had lots of great clues and fill that were unique and fresh to me. Plus I always enjoy learning about people whom I didn’t know before solving. Now I want to go watch some classic Mexican cinema with MARIA Felix and listen to some jazz for a TRUMPETSOLO by Clora Bryant!