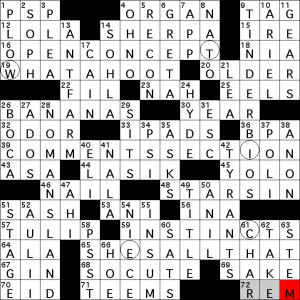 hello and welcome to episode #684 of matt gaffney’s weekly crossword contest, a guest puzzle by malaika handa (now blogging the USA today and new yorker puzzles here at crossword fiend!) called “Seeing Double”. although malaika is already a household name in indie crosswords, i believe this is only the second puzzle of hers that we’ve blogged here (the first being an AVCX puzzle from may 19). the instructions for malaika’s puzzle tell us that we are looking for a 5-letter word. what are the theme answers?

okay, so, uh, i don’t know. i’m definitely in a slump here meta-wise, because this is the second month in a row i’ve been stumped by a week 2. the longest answers in a the grid are a 15 across, two 11s across, two 10s down, and two 9s across. maybe the five longest ones are theme answers, or maybe the five acrosses are themers? the first seems a little more likely to me than the second because the 11s and 9s are fully stacked, which seems very constrained if they’re both thematic. so let’s work under the assumption that the five longest answers are thematic. those are:

so what’s going on? COMMENTS SECTION has a pair of double letters (M and S), and SHE’S ALL THAT has the double-L, but otherwise not.

how about the clues? hmm, this may be something—it looks like maybe each theme clue has exactly one double letter: baRRiers, scroLL, romantiC Comedy, lOOking/gO On (okay that’s two but both the same letter), and haS Special. and indeed, “scroll” seems like a deliberate word choice in the COMMENTS SECTION clue, since it would sound a little more natural as just “do NOT read …”, and i’ve already noted the formal use of “romantic comedy” instead of “romcom”. but even if these double letters are noteworthy, what are we supposed to do with them? RLCOS doesn’t spell anything even if you anagram it. (weirdly, it almost spells SCROLL again.) i guess if you include both O’s from the TINDER BIOS clue, you can get COLORS by scrambling, but that’s not a 5-letter word, nor does there seem to be a sensible reason to reorder the letters in that particular way.

the thing about focusing on double letters is that there are always a bunch of them in any crossword, because that’s just how english is. so even though it’s suggested by the title, i’m not getting the big “click” from this idea. it’s maybe a little more interesting that two clues contained doubled numerals: the “<33" in the TINDER BIOS clue (i actually don't know what this means; i know <3 is a heart, but what's the second 3 doing?) and $55 in {Exams that cost $55 to take} SATS. i'd be excited if there were three more of these, especially if those three happened to be 11, 22, and 44, but no, there aren't. there are clues that include "one", "two", and "four" spelled out, though. is that something? it's probably nothing.

there are four (!) clues that refer to disney princesses, which seems like rather a lot: {2021 role for Halle Bailey} ARIEL, {___ Salonga who voiced two Disney princesses} LEA, {Simba’s bae} NALA, and {Cravalho who voiced Moana} AULI’I. i don’t think there’s necessarily anything thematic going on with these, but it’s quite a pile-up for one puzzle. AULI’I also contains a rare double letter, which is maybe a little more interesting. but i don’t see where this is going.

a fair number of clues include words that also appear as grid entries, so maybe that’s what “seeing double” refers to. normally this is at least somewhat frowned upon, so a deliberate choice to dupe words between grid and clues might be a meta mechanism. but these are all fairly common words that could just appear naturally in clues:

so yeah, i don’t think there’s anything here either. (and if there isn’t, i apologize, because it’s kind of gauche to dwell on these minor dupes.)

an idea that i wanted to make work—although i think it’s likely too tricky for a week 2, and this shouldn’t be that hard given how many names are already listed on the leaderboard—is for the same clue to satisfy multiple answers in the grid. i couldn’t see anything precisely along those lines here, but it’s interesting that {Home where everything is on display} ANT FARM (great clue, that) crosses OPEN-CONCEPT, and perhaps even the crossing of COMMENTS SECTION and NO MAN’S LAND, and maybe… SHE’S ALL THAT with TITLE? (i mean, it is a title, but that’s kinda weak.) TINDER BIOS with YOLO, which might show up in a TINDER BIO? ugh.

the grid includes ANI, IN A, NIA, ANIL, and NAIL. that’s … that’s nothing, but i’m grasping at straws here.

oh my god. okay. i’ve just figured it out (last minute, to be sure) and it’s quite simple and also an extremely impressive construction. my solve has been all over the place, but yeah, it is just the five long across answers. each contains the same set of letters twice each, with one letter left over:

the leftover letters spell out TWICE, which is the answer to the meta. i am super impressed that malaika managed to stack those 11s and 9s so cleanly, and also chagrined that it took me so long to see the straightforward wordplay involved in the meta. but hey, at least i got there in the nick of time.

that’s all from me. let’s hear from you all in the COMMENTS SECTION!

This entry was posted in Contests and tagged Malaika Handa. Bookmark the permalink.