Theme: BASTILLE DAY (30a, [Common name of France’s July 14 “Fête nationale”]). France’s tri-part motto is highlighted with circled letters in three rows of the grid. Finally, the EIFFEL TOWER makes an appearance at 45a. 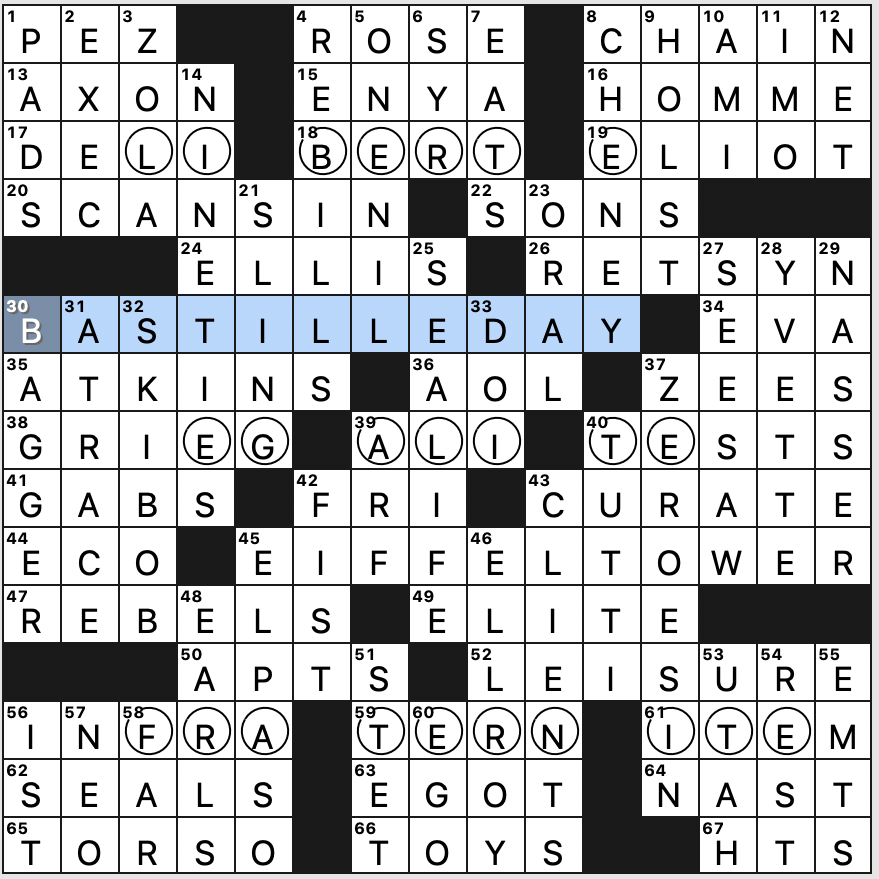 I enjoyed this theme. Once I got the final E in LIBERTÉ and BASTILLE DAY, putting in the rest of the circled letters went pretty quickly. I couldn’t have told you what date BASTILLE DAY occurred on, so I was happy to learn it from this grid.

Not a lot of sparkle in the fill. I liked seeing SKIBOB [Bike-like vehicle with runners instead of wheels] and SEA LIFE [Cousteau concern]. The rest felt solid, though workmanlike. 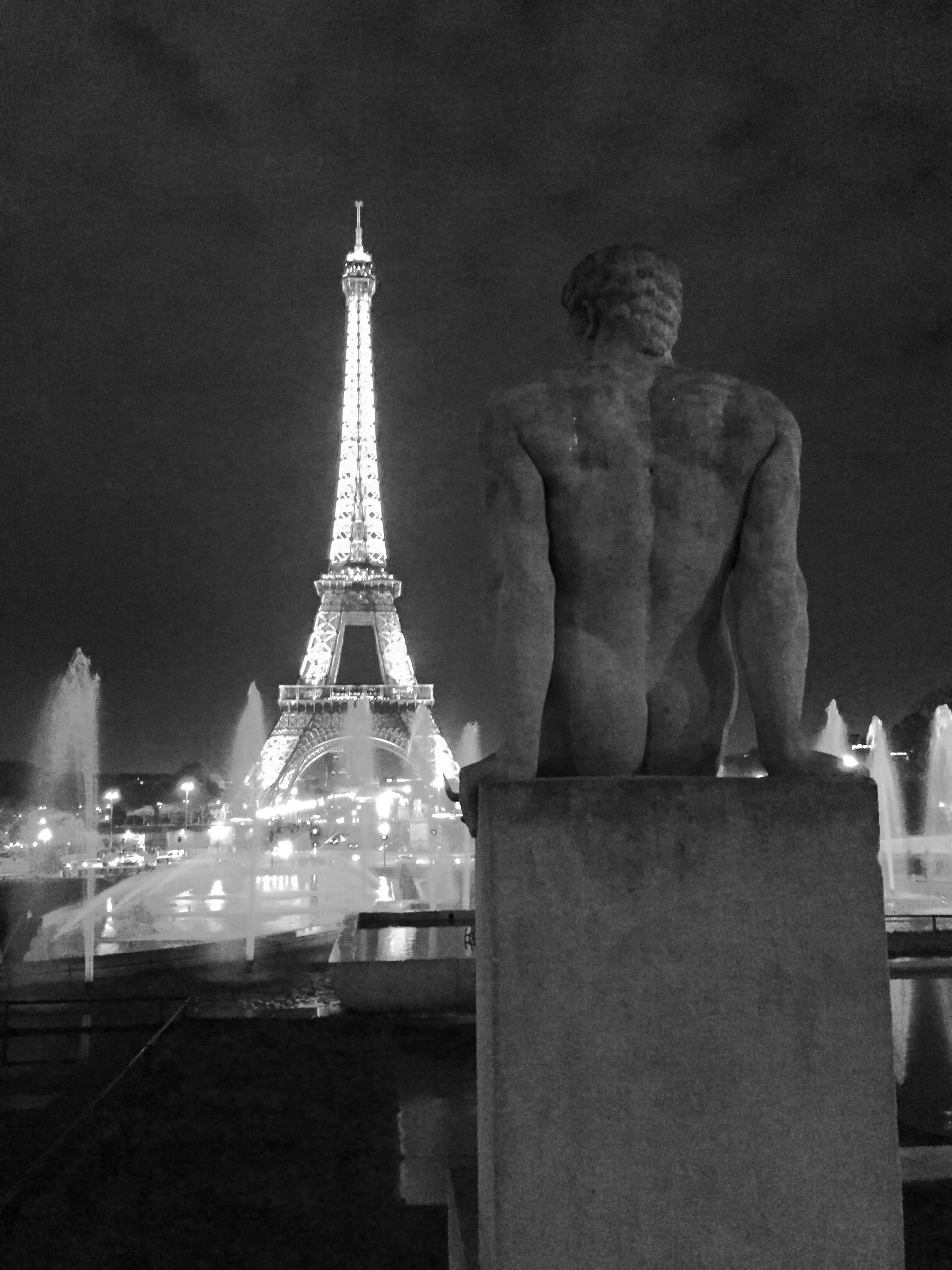 Not a lot to talk about aside from the theme, though I did enjoy that. 3.7 stars. 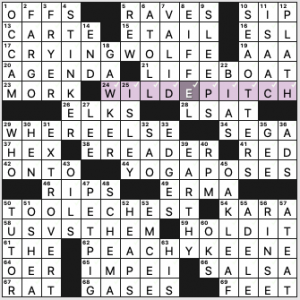 The theme revealer is 38a. [Kindle, e.g. … or a hint to this puzzle’s theme?], E-READER, and the themers are familiar phrases that have had an E tacked onto the end of a word to turn it into an author’s name:

Fun theme—who doesn’t like wordplay combined with the books we read?

Fill I liked: YOGA POSES, US VS THEM, “HOLD IT!” and SEA OTTERS. 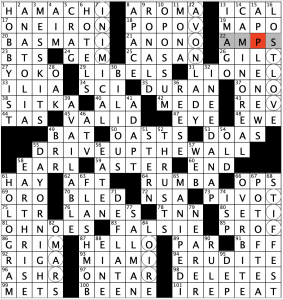 Ella Dershowitz and Aimee Lucido have today’s AVCX, and this latest collab was a lot of fun to solve, especially since unlike last week’s puzzle, the full grid was present.

“Tall Models” is one of those puzzles where some entries make a 90 degree turn in the process of being entered into the grid, and the revealer at 55A (“Irritate…or what you need to do to find six answers in the grid”) gives a hint at what these have in common:

Each across entry above extends into (and only into) the circled squares above it, and each set of circled squares spells out a vehicle model – MINI, NOVA, VOLT, FIT, RAM, and RIO.

Even more impressive, these circled squares fit into other entries rather than just being clued by something like “–” — INIMICAL, AVON LADY, LOST LOVE, STIFFEST, OMARS, and LOIRE 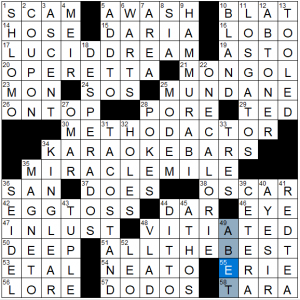 I found today’s offering from Natan less literary than I’m used to from him, but there’s still plenty to talk about even if I’m not adding to my reading list. This grid design is one of my favorites as a solver – I associate the middle stairstack with Andrew Ries, but Ada Nicolle and of course the New Yorker’s roster of constructors also use it quite a bit.

In this puzzle, METHOD ACTOR, KARAOKE BARS, and MIRACLE MILE fill out the stack; three colorful (and colorfully clued) marquee entries for my money. I particularly enjoyed 34d – KARAOKE BARS clued as [Places with pitches and pitchers]. I’m a bit sad that in my short time living in Los Angeles, the only MIRACLE MILE museum I made it to was the La Brea Tar Pits, but I’ll make it back some day.

There’s all sorts of other good stuff in here:

Theme: “I Protest” – The first word of each theme answer is a type of protest. 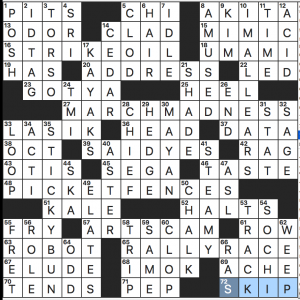 Solid theme today that is nicely described by the puzzle’s title. I’m a big MARCH MADNESS fan, but I didn’t know the tournament was that old so I needed a couple crosses to lock in that answer. RALLY RACE felt a little redundant to me as a phrase – I feel like I’ve mainly heard the term rally as a standalone? – but I know next to nothing about auto racing so it could definitely be a natural term there.

My favorite parts of today’s puzzle are the two long downs, I’M ALL EARS and STICKY BUN. The grid layout of this puzzle means that these two entries cross only a single theme answer, and this lack of constraints means that they can be super sparkly. Other pieces of fill that AMUSED me were ART SCAM and the rhyming ADDRESS and SAID YES. 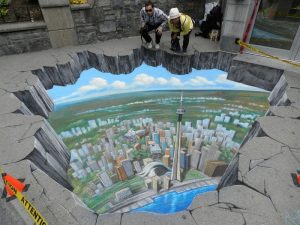 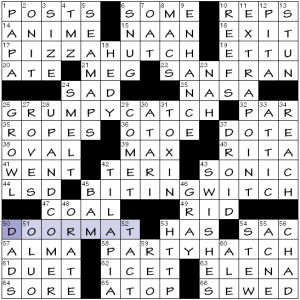 Today we’re affixing -CH at the ends of familiar phrases to wackified effect. As there are four theme answers, there are four stuttered CHs in the title.

As with Monday’s offering, a serviceable theme. I’m a bit distracted this morning, so forgive me if the write-up is not full of my usual sparkling wit and cheerful nostrums. 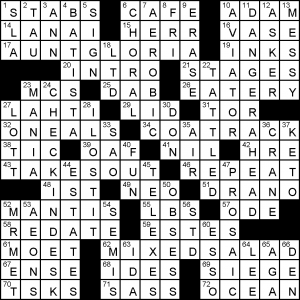 I have… questions, particularly about the revealer to Darryl Gonzalez’s puzzle today: MIXEDSALAD. What is an UNMIXEDSALAD then? In any case the first word can be unscrambled to make a “___ SALAD” salad. I don’t know enough about the show to know if AUNTGLORIA is her standard name, seems a tad quaint, in any case AUNT=TUNA. Below that is CHECKINDESK; CHECKIN=CHICKEN, it seems. Also in the downs is DANGERAHEAD (garden). There is bonus pair in COATRACK (taco) and TAKESOUT (steak). I’m assuming these make more sense if you’re American…

There are quite some ugly plurals going on today: plural surname ONEALS; LBS, which is generally abbreviated to LB, even in plural; TSKS, which is a plural interjection.

The last time the SLA was relevant, so were TELEXES.