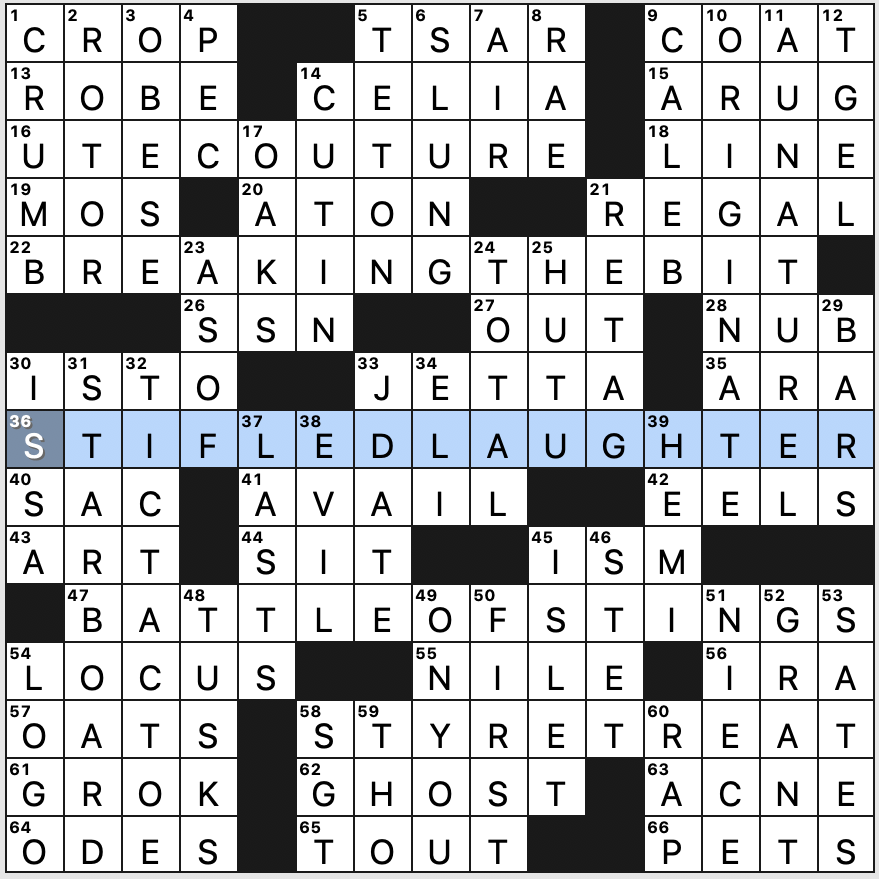 That works. I enjoyed the aha moment (or is that the a moment?), and the reference to one of the most fascinating events in English history. 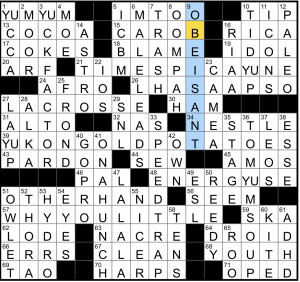 Are there a lot of squares with a little “YU” in them?  Yes, but there’s something a bit haphazard about the placement here that felt fine, but a little unsatisfying.

On the OTHER HAND, I liked the appearance of LHASA APSO and LACROSSE in the grid.

Took me a while to sort out all the base phrases for this puzzle (at least I think I have them sorted. Let me know if I’m wrong). The theme answers are punny. I had to say them out loud to catch on to a couple. 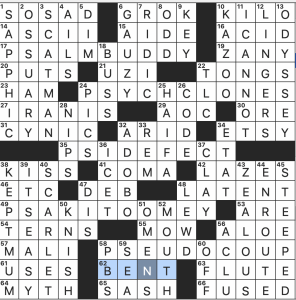 I’m not sure if my struggle to figure this out means my brain is stuck in low gear or this is a hard theme worthy of the Fireball name or they’re really strained puns. Once I got them, I enjoyed them all.

What I didn’t know before I did this puzzle: that the empire of MALI was ruled by Mansa Musa. 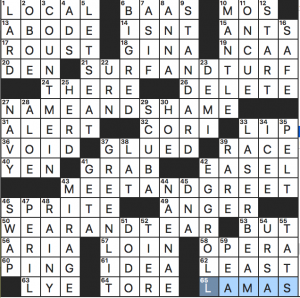 Theme: “Rhyme Time” – Each theme answer is a rhyming phrase in the form of “[X] and [rhymes with X]”

The theme today is pretty basic – I had to look over the answers a couple times to make sure that I wasn’t missing an extra layer anywhere. That being said, I love the answers Nate chose here! NAME AND SHAME and the clue on MEET AND GREET certainly helped a somewhat retro theme feel fresh and modern.

I had such a fun time solving this puzzle! I started smiling at COUNT ME IN  and LET’S EAT in the northwest corner of the puzzle, and never stopped. My favorite clues today are probably 23D’s  [Prefix for “god” or “sexual”] for DEMI and the bonus rhyming at 20A [Bear’s lair] – DEN. The fill overall is incredibly smooth and there aren’t many places to get caught up in proper nouns.

Looking at the puzzle after solving it, it’s interesting to note just how closed off it is – put a black square at the U in the GLUED/SCUBA crossing, and you’d have two completely separate puzzles. Oftentimes constructors try to have several entries into each section of the puzzle, so that the solver doesn’t need to rely on getting a single answer in order to get a foothold in a new grid area. On the other hand, a puzzle that’s more sectioned-off has fewer constraints on the fill, meaning that said fill is often cleaner and more exciting. Crossword construction – it’s all about the trade-offs!

I saw Eric Burdon and The Animals in concert once. I would rank it as in Top Five worst concerts I’ve ever attended. I think it would’ve been better if it had the backup band that is featured in this puzzle.

THEME: Creatures whose names sound musical are reimagined as if they belong to an orchestra… or a band. Not sure which. 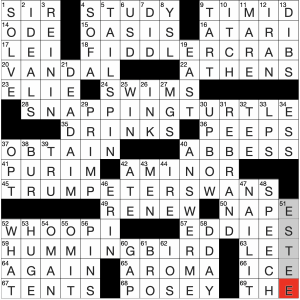 Actually has more of a Pet Sounds feel to it than anything from The Animals. Brian Wilson did bring a bunch of animals into the studio, after all.

Very cute visuals. I especially like the SNAPPING TURTLE. I picture him with sunglasses and a fedora snapping to some jazz, despite the fact that the 3/4 of the clues suggest that they are in some sort of orchestral arrangement. The HUMMINGBIRD, on the other hand, is joining a gig that has backup vocals, which I don’t quite associate with orchestras. To that, I don’t really associate HUMMING with backup vocals either, but whatever.

No complaints about fill. Was unfamiliar with Buster POSEY. It’s an old-timey sounding name, but he’s actually only 34 years old. Fun to learn. Wouldn’t mind seeing Parker POSEY in there either.

Nothing too flashy in the fill, but a fun puzzle for sure.

Theme: Every themed answer included an animal’s name (the “creature”) and a body part (the “feature”). 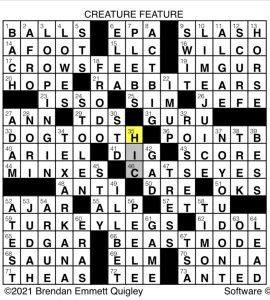 BEQ ranks this as a medium puzzle, and I think that’s a fair estimation. The grid left with three-letter spots to provide some support for the longer ones. Plus, once I got one of the theme answers, I had a much better sense of what those longer Across answers would look like.

I thought there were some creative walls down memory lane with the callbacks to Dr. DRE’s musical past in 50a [“Dr. whose career started in the World Class Wrecking Cru”], SWIT in 9d [“M*A*S*H star”], and BESS in 39d [“Partner of Porgy”].

Other fun clues include:

Anyway, BEQ’s puzzle brings some solid wordplay with a really fun theme. That starts with classical composer BACH in 1d [“Juggler’s props”] crossing with a goofy reference in 1a [“Juggler’s props”] BALLS and the solve only gets more interesting from there. 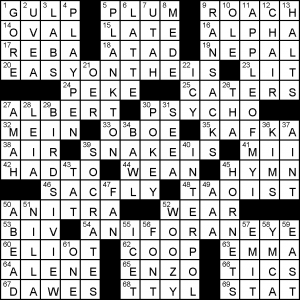 The LA Times typically has a “no rebus” policy, but Grant Howell’s puzzle is pretty close to one. In one direction you read the answer as “EYE” and the other a regular letter I in four and a half answers: EASYONTHEIS, BIRDSIVIEW, APPLEOFMYI, SNAKEIS and one half of ANIFORANEYE, the revealer.