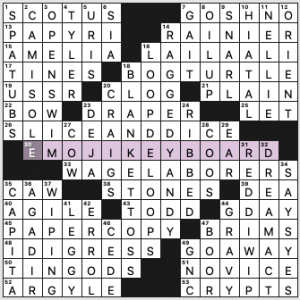 Hey, the Boswords Summer Tournament is coming up on Sunday, July 25, and I do encourage you to sign up. It’s online, and there’s a Twitch livestream that makes it feel a bit less virtual and more real—though the folks who aren’t featured in the video stream can only interact in the (typed) chat window. It’s a fun lineup of constructors, including Malaika Handa, one of the new Fiend bloggers. Why am I mentioning this here, int he NYT write-up? Because I hadn’t had a good sense of Ryan McCarty’s style until I did one of his puzzles in the Boswords Spring Themeless League and got to hear Ryan talk about his puzzlemaking. Have been a big fan ever since! This wild NYT pinwheel grid with a super-chunky midsection (staggered 13s crossing staggered 11s, how is this even possible) has a bunch of zippy, fresh fill and I’m calling it 4.5 stars. Those of you who get disgruntled at names in the fill may be cranky, but I appreciated that the first four entries I filled in were all names! (AMELIA crossing TYLER URIS SIA).

Toughest square for me: where 22a. [Pull (out)], BOW meets1d. [Whirlpools], SPA TUBS. I was thinking of whirlpools found in nature, wasn’t parsing SPATU*S as two words, and had a hard time seeing past TOW. Oof!

Didn’t know the term WAGE LABORERS, 33a. [Ones exploited in a capitalist system, per Marx]. Also new to me: 18d. [High-flying picnic game], BLANKET TOSS. Googling … oh! I was picturing a blanket being tossed, but it’s a person being tossed, trampoline-style,  on a blanket whose edges are held by a group of people. And Google is showing me that this is traditionally part of Iñupiat whaling festivals, rather than lower-48 picnics. 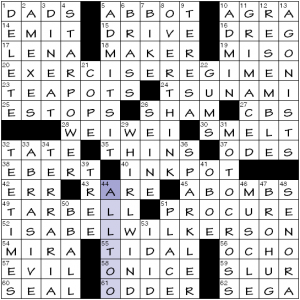 Two answers span the grid: 20a [It may require some heavy lifting] EXERCISE REGIMEN and 52a [“Caste” author who was the first Black woman to win the Pulitzer Prize in journalism] ISABEL WILKERSON—that happened as late as 1994! And one of her notable antecedents is nearby: 49a [Lincoln biographer] Ida TARBELL. 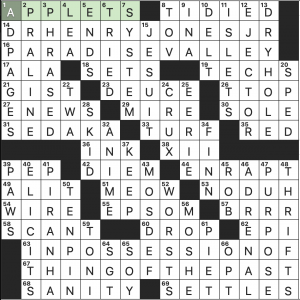 As a general rule, as I have less issues with Stan’s puzzles. This week, that does not seem to be the case. This is also where I am going to say it’s been an exhausting week and work has been a little stressful … no, that won’t fly here. This is just a good, tricky puzzle! Impressive 14 stacks don’t help either, and the clues are vague enough to where you need lots of crossings to get them. Especially for 14-Across! (See below!) I had fun, and that’s all that matters! 4.6 stars from me.

Everyone have a safe and healthy week! (And thanks to pannonica for writing up today’s LAT for me!) 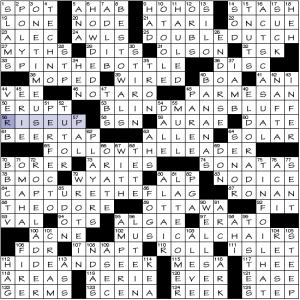 Some speculative career determinism—all in fun, of course. The first word of each game’s name relates to a profession.

It’s a cute theme idea, but to my thinking the execution is mildly problematic.

THEME: Two word phrases where the first word starts with U and the second with P. 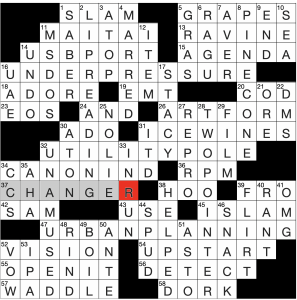 Fun looking grid. Caught my eye instantly. It does make it somewhat tricky for the themers to pop out (they very well could be the spots occupied by UNAMUSED, LIPREADING, etc.) The 7/13-Letter themer stacks were a surprise for me.

I don’t quite get the theme with respect to the revealer. None of the phrases begins with UP at all. I thought, after glancing the title and the first themer I uncovered (UNDER PRESSURE), that it would be UNDER/OVER preposition related. I guess if you read it as U.P. START, then it works better, but the clue doesn’t direct us to parse it as such. So not really a big fan of this theme.

Nice longer fill on this one- almost had a themeless feel to it (which I had fingers crossed would happen again today).