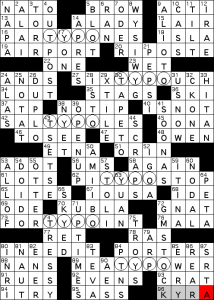 hello and welcome to episode #685 of matt gaffney’s weekly crossword contest, “Get Out Your Wite-Out”. after a guest puzzle by malaika handa last week, matt is back in the saddle with this week 3 puzzle, for which the instructions tell us that we are looking for a 6-letter word. what are the theme answers?

well, as has been the case distressingly often in recent weeks, i’m once again blogging a puzzle that i haven’t figured out. but i do know the six obvious theme answers in this 15×21 grid, which are all ten-letter across answers that are goofy made-up phrases:

i had two immediate observations: first, these goofy phrases all contain TYPO as a substring across a word break. in the context of the title, that suggests removal of those letters. second, the parenthetical numbers in the clues are 4, 5, 7, 7, 5, 7. that’s not an ordering, so i’m guessing those are lengths of other words (perhaps other entries in the grid, or perhaps words that aren’t in the grid at all) that are related somehow to the result of doing something about these TYPOs.

less directly related to those six theme answers, i couldn’t help but notice (and i apologize that i can’t help but bring up) that the fill in this puzzle is very creaky. matt has often skillfully woven six medium-length theme answers into a 15×15 grid with nary a hiccup, but here he’s given himself six extra rows in the grid to smooth things out, but there is still a giant amount of fill that made my nose crinkle. i won’t go through it all, but just for starters, there are no fewer than ten (!) partial phrases in the fill; one or two is normally about as much as i would tolerate without raising an eyebrow. even the corners that seem to be unconstrained by the six theme answers are very clunky, so there is definitely some extra theme material hidden in the grid. in fact, i find it relatively likely that there are more than six extra theme answers, because just six doesn’t seem like it would be enough to explain why the grid is so bad.

okay, so about the wite-out and the TYPOs. there are two obvious things we could do: wite out just the TYPOs themselves, or wite out all the instances of those four letters in the grid (which is a lot!). going with the first idea first, we would get PARNES (4), SIXUCH (5), SALLES (7), PISTOP (7), FORINT (5), and MEAWER (7). some of those look like they could be something, or be turned into something with one more small change (e.g. PISTOP -> PISTOL or MEAWER -> MEOWER), but then you also have SIXUCH, which, uh, not so much.

what about other entries in the grid? three of the parentheticals are (7), so it makes sense to look at the seven-letter entries, of which there are eight in the grid:

it definitely caught my attention that several of these words have many of the letters of TYPO: AIRPORT, RIPOSTE, and PORTERS have three each, and OUTPOST has five total (three unique). i still don’t really see how to connect any of them to the theme answers, though.

oh hey, here’s an idea: all of the parenthetical numbers are between 4 and 7, which matches up with the positions where the letters of TYPO are in their respective ten-letter theme answers. what if we look at the down answer that crosses at the indicated place?

so i’m back to nothing. and now the deadline is upon us, so i’m going to throw in the towel. i’ll toss out a hail mary guess of DELETE, which is a six-letter word that may be related to the mechanism, but i’m not optimistic.

let’s hear in the comments what i should have figured out!