Bleh. There are a lot of things that irked about this one. Let’s start with the revealer: TAKES COVER (60a, [Shelters, or (with another space) makes phrases like five in this puzzle]). The re-parsed version is TAKES C OVER, and somehow that’s supposed to mean taking the C that starts a word in a given phrase and move it somewhere else in the phrase, thus making a wacky new phrase. Here are the results. 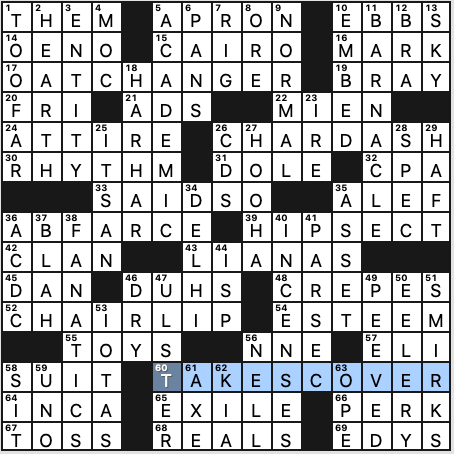 I’m a fan of wordplay, but these felt tortured and forced, especially the revealer. 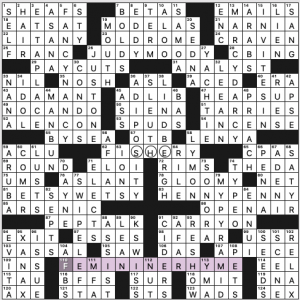 Jenni’s on vacay so here’s a quick recap from Amy. The theme is two-layered (or three-?): 110a. [What each answer to the starred clues is an example of, in more ways than one] clues FEMININE RHYME, and the starred/italicized clues give you female names that have “feminine rhymes,” which I just learned are two-syllable rhymes (vs. single-syllable masculine rhymes like hot/shot or pee/wee). There’s the kid-lit character JUDY MOODY, doll BETSY WETSY, fairy tale character HENNY PENNY, kid-lit’s FANCY NANCY, and TV character MARCY DARCY. Amelia Bedelia must be a nonbinary rhyme.

The black squares in the center of the .puz file are red squares on the PDF (I have a B/W laser printer so…), with three pink squares (circled in .puz) inside 62a. [Supplier for a pescatarian restaurant [and in the highlighted letters: Pronoun for every name in this puzzle’s clues and answers]], FISHERY, with SHE‘s clue tipping us off that every name in the grid and clues is female. 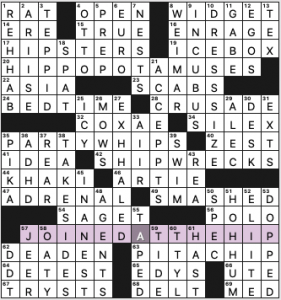 Amy again, filling in for Ben. Our Thursday trickery this week is sort of a reverse rebus—a letter doubled despite the word only needing a single instance of it. The revealer is 57a. [Inseparable … or like three pairs of answers in this puzzle?], JOINED AT THE HIP, and there are six paired entries in this 16×15 grid (including 57a) that contain HIP. The Downs crossing each pair of HIPs only need a single H, I, or P, but they get two. The other HIP answers are HIPSTERS, HIPPOPOTAMUSES, PARTY WHIPS, SHIPWRECKS, and PITA CHIP. The wackadoodle Downs are:

Theme: “Break Up The Band” – Each theme answer begins with “BA” and ends with “ND”, literally breaking the word “BAND”. 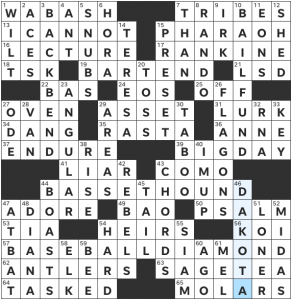 Great descriptive title for a fun theme.  I love how the grid layout allows for five theme answers of four different lengths – this choice means that Matthew could focus on picking colorful theme answers rather than ones with matching lengths, and I think all the answers are exciting ones! My favorite answer was BAIL FUND, which I personally can’t remember seeing in a puzzle before.

Despite having so many theme answers the grid is still super-smooth. I mentioned yesterday that we don’t always see wide-open corners in USA Today, but after today’s puzzle I might have to retract that statement. I love the value Matthew pulled out of the longer slots in each section. Max and his ANTLERS! Claudia RANKINE! PHARAOH, which I CANNOT spell correctly anytime I write it!  This puzzle struck all the right CHORDS for me, and despite the number of long answers I ended up having my fastest USA Today solve to date.

Theme: In each themed answer, the letters spelling out “energy” are out of order (shifted). 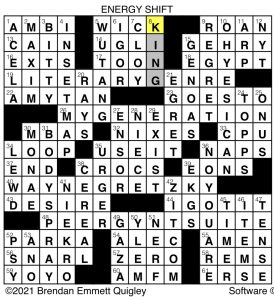 I am amazed by the creativity of this theme. I have some questions for BEQ about how exactly he came up with this one. When I first saw the title, I definitely thought I’d be out of luck on the theme. I don’t know much about energy (science was never my forte). Finishing out MY GENERATION, though, let me look back at the other two and see shift. Interestingly, WAYNE GRETZKY also includes EGRET, a red herring for 21d [“Wading bird with a S-shaped neck”].

Other clues on this Thursday:

This was definitely one of my favourite BEQ puzzles so far, and if you’re still craving some spelling bee action, it should have you covered between its theme, 35a’s [“___ in a sentence”] (USE IT), and the reference to the NYT’s anagram mania through the Spelling Bee.

Looks like a debut today from Katrina Lee! Congrats and welcome! 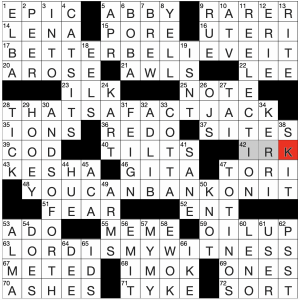 Impressive construction here with the vertical pillars having to run through two or three themers each and abut one another to boot. Nice finds too (TOTINOS for the win! Love that SNL sketch!).  The top half of the puzzle was so easy for me that I thought I was gonna break a speed PR. Then I got distracted by a housefly and completely botched the south. For AND SO FORTH I entered some variation of AND SO ON, tried to make YOU CAN BET ON IT work, KNIT instead of KNOT for the macrame clue, KENRI instead of KERRI as I assumed I?K was INK without reading the clue. And really wanted LORD AS MY WITNESS instead of the correct IS.

Mostly my own doing though.

Fun to see BOBA in the grid, especially next to BREW. HOOEY is always a delightful word and nicely juxtaposes the theme. Not sure why there was an anagram nudge in the TORI clue (anagram help is often reserved for more obscure names or a coincidental relationship between the anagram and the entry itself).

Fun fact for me was the clue for EWOK [“Return of the Jedi” critter that’s never named in the movie]. I still haven’t seen Star Wars, but I am very happy to have this gem in my back pocket.

New for me: GITA. 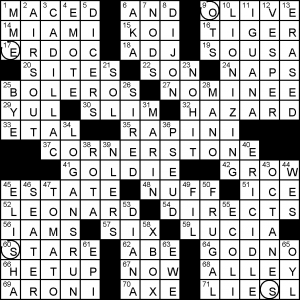 Today’s puzzle by David Poole is a variant of the “words” in corners theme. Today features CORNERSTONES: people with the surname STONE in corners. The circles and their odd placement vis-a-vis said corners threw me for a while. They’re there as a placeholder for you to start reading, I guess. So filmic EMMA, OLIVER and SHARON and musical SLY (not to be confused with SLY STallONE) can be spelt out.