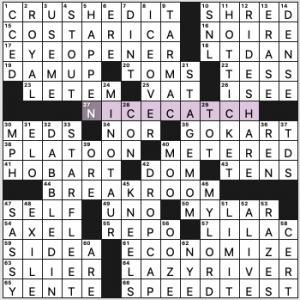 Fairly breezy Friday puzzle, no trouble spots for me. Fave fill: CRUSHED IT, COSTA RICA, “NICE CATCH” (though I’m more apt to say “good catch” or “great catch” to my proofreader), BREAK ROOM (I work from home; gonna pick a room to be called the break room), water park’s LAZY RIVER, internet SPEED TEST (Ookla!), DABBLED IN, STARFLEET, DROP CAP (do people know this term if they haven’t worked in publishing?), and RIDESHARE.

Four stars from me. Into the weekend!

Theme: Each themed answer included the baby form of an animal as the first word or part of the clue. 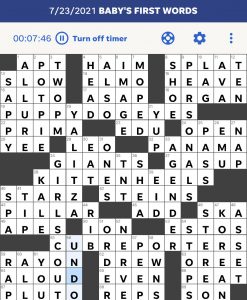 This was a cute theme. With the title, I thought it would be more literal, but PUPPY DOG EYES quickly became apparent when I hit 19a and then, with 38a, I was sure of what the theme was, even though I had to look up what KITTEN HEELS were. (They are shoes with a thin, 1-2 inch heel, for the record. They also have an interesting history, which also happens to include some 17th century male fragility. If you’re interested, you can read more about it here.)

Structurally, I liked the longer down clues of this puzzle. I typically enjoy when one of the themed clues is highlighted in particular in the center, from a visual standpoint. It was a nice mix of short and long answers. I struggled in the left center segment, unfamiliar with 40a [“Run the World” channel] until I became so STARZstruck that the answer hit me. 41d’s “Pointer ” was a quick piece of clever wordplay. I’ll definitely take Claire’s TIP and remember it.

Clearly, I should’ve been sharper this morning, as I confused Junior Mints with Thin Mints, erasing the mental picture painted of GIRLSCOUT cookies season in 34d [“Seller of Thin Mints”]. This was a nice use of a longer word that really brought the section I was struggling with together. Parallel to it, I enjoyed filling in AGENDER for 33d’s “Like some nonbinary people.” It was a good casual clue, and for those learning about it, easily filled in that right center section by its crosses.

As always, my Friday faves were as follows:

Claire’s puzzle was not one that saw much LAG as I was working my way through it. Out of TEN, I’d say it was a solid eight. As much as I love a quick solve time, I’ve yet to meet a puzzle where I haven’t gotten SAPPY about a clue (hello, mourning PLUTO’s dismissal as a planet once again), and this one balances that sentimentality with good cluing, a light theme, and a nice mix of answer lengths. 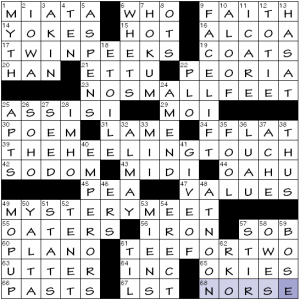 As marciem points out in the comments, earlier I mistakenly posted a write-up of yesterday’s LAT crossword. As I have some obligations this afternoon, this will be an attenuated review.

Common phrases containing a word with long-e sound formed by the vowels EA are replaced with a homophone spelled with EE.

Bandleader Lowell George’s feet were notoriously small, hence the inspiration for the name. 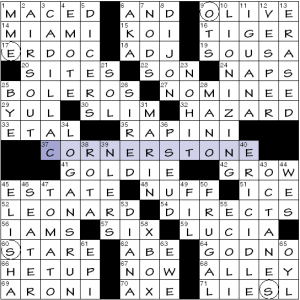 Quite self-explanatory, this one.

Tally: 2 women, 2 men; 3 associated with film (2 actors, 1 director (54a [Calls the shots] DIRECTS)); 1× 3 letters, 1× 4 letters, 2× 6 letters. Although I generally tut-tut cross-references encroaching onto theme material, I’m okay with it here, as both elements—OLIVE and OYL are directly involved, so it’s hermetic. Overall, neither a diverse nor cohesive group, but more than adequate for the puzzle’s purpose.

I have the vague sense that I shared this one recently (it’s the only track from the album available on YouTube), so if it’s a repeat, I apologize:

But look! it was recorded in ULM!

Good morning everyone! Here are some puzzle-y bullet points. 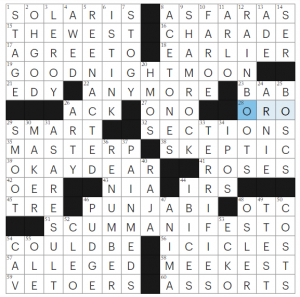 Things that made me go Hmmm: 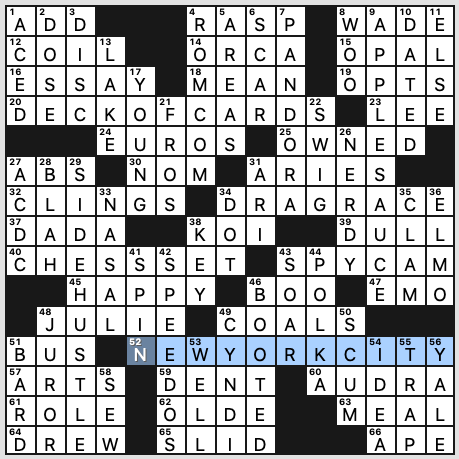 Solid set. I wonder if the constructors considered beds at all. HOTEL ROOM could have been a fifth entry, but it might have compromised the fill.

Speaking of which, it’s very nice. I love SIDE HUSTLE in particular, but APPLESAUCE, PANDORA, SPEEDOS, ROMCOM, and SPYCAM are all great. Nothing triggered the scowl-o-meter, resulting in a fun, smooth solve.

Smooth and enjoyable puzzle all around. Oh, and a nice debut for one of our co-constructors. Congrats and four stars from me!

This one was a bit harder for me than the average Inkubator. This is not a complaint and could be due to vacation brain on my part. In any case, it was fun!

The theme here is in the clues, not the answers. 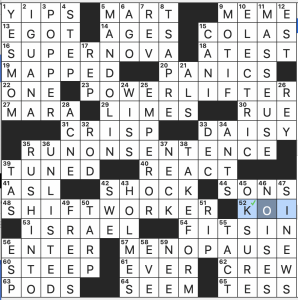 All the women my age have figured this out already. The revealer is at 57a [Life phase that shares symptoms with this puzzles four longest answers] is MENOPAUSE. Nice, tight, consistent and certainly original theme!

What I didn’t know before I did this puzzle: never heard of Martie Maguire, who apparently plays the MANDOLIIN, among other things. Google tells me she’s a member of the Chicks, so now I’m embarrassed, because I know their music. The only band member I’ve heard of is Natalie Maines. Here’s one of my favorites of theirs.