(Lemme get the blog up now. Haven’t done the puzzle yet, was watching the Olympics opening ceremonies.) 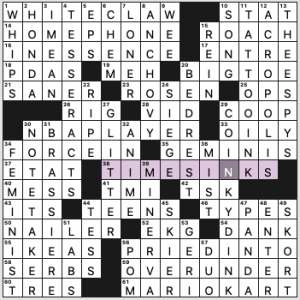 Okay, here we go. This 70-worder is maybe on the tough side but/and full of fun stuff. Fave fill: WHITE CLAW, HOME PHONE, NBA PLAYER (because it’s not NBAER!), BIG TOE (because this was my first answer in the grid, [Hallux, less formally]—know your anatomy/medical terminology!), TIME SINKS, OVER/UNDER, MARIO KART, FEMINIST, TESSERACTS, GLITTER, THE ESPYS, and COINKY-DINK. 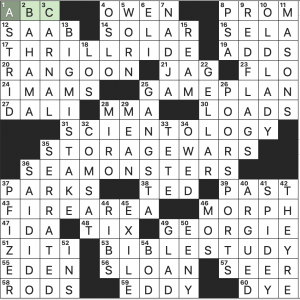 Yet another byline I am not familiar with today. This is becoming a trend! Nice puzzle, though. Not too difficult, and a nice 11-letter stack in the center. A few timely entries, as you will see below. I don’t believe I have solved a Jake Houston puzzle before, but I like what I see. Keep ’em coming! 4.5 stars from me.

That’s all for now. Boswords is tomorrow! Might see some of you there (in the chat, of course!) 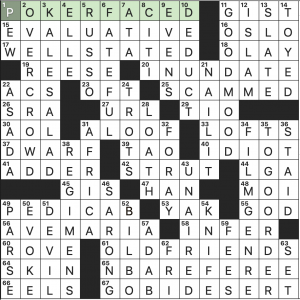 This one gave me fits when I first started, but once the toehold was gained, it then fell fairly easily. I don’t remember much agony at the end, but it did take a while to find some traction. I have done a few Matthew Sewell puzzles at this point, so I think I am getting used to his style. And yes, this one is easier than an old-time Stumper for sure. But I’ll take it! 4.6 stars today. 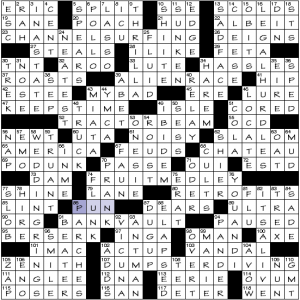 What is the Fauxlympics, you may ask? 86-across is here to helpfully explain that that’s a PUN. For the puzzle’s theme, various events are referenced via unrelated common phrases.

I don’t know what to say. This is a ramshackle affair, much as the 2020 (2021) Tokyo Games are turning out to be. Some of the “events” are whole categories, some are very specific, one is incredibly generalized. Then there’s a pair of clues forming their own mini-theme, there seem to theme-adjacent entries littering the grid randomly—which serves only to further distract rather than enhance—and I’m also annoyed that I had to think of, let alone type, Fauxlympics so many times.

Theme-adjacent stuff: 62a [Zigzagging winter event] SLALOM; 79a [Track division] LANE; 89a [Event that’s longer than a marathon, familiarly] ULTRA; 36d [Sprinted] SPED; 40d [Track event] RELAY. Beyond these, there are some others which could conceivably be related to the theme: 10a [Berlin-to-Athens dir.] SSE, 116a [Tokyo honorific] SAN, 31d [Winning margin, perhaps] NOSE, et al.

Make sure you don’t call today’s constructor “Jeff” after this puzzle. 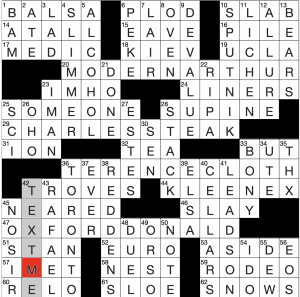 THEME: Common phrases with “nicknames” are replaced with their formal names.

I liked this! It had a layer of trickiness in it as the nicknames weren’t clued at all, so it led to a nice little AHA. Seems like there’s likely a lot of names you can do this with. Heck, my own is easy enough (anyone care for a SLIM JAMES?), so I’m a bit surprised that the spelling of TERENCE made the cut (I’m only familiar with TERRENCE).

Anyone else plunk in CALL ME instead of TEXT ME? The latter is definitely much more apropos now.

Thanks for this one. 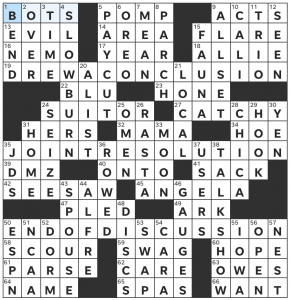 Very solid gridwork today from Brooke Husic, with the type of smooth answers I’ve come to expect from the USA Today puzzle. Some really nice bonuses with SLOW BURN and TALK SHOW.

The theme today, as cemented by its title “On End,” consists of three spanners: DREW A CONCLUSI(ON), JOINT RESOLUTI(ON), and END OF DISCUSSI(ON). All of these quite literally end with “on.”  In order to narrow down the considerably large entry pool this theme generates, all of the answers ending in “on” are themselves a type of ending. I don’t love that “end” is both in the title and in 50a, and I wish that DISCUSSION was more solid in terms of its ending association (as compared to the stronger CONCLUSION and RESOLUTION), but it’s possible that there weren’t many other options for that slot.

1a. [Automated video game opponents] –– NPCS? MOBS? No, BOTS. Who knew there were so many three letter words for a digital foe? Great opening entry.

15a. [Bell-bottom jeans feature] –– Gone are the days of skinny jeans: pants with a FLARE are rapidly coming back into style, as evidenced by my shopping sprees as of late and the party I recently attended with the theme: “Future Nostalgia / Camp / Maximalist Disco Chic.”

22a. [Bassist DeTiger] –– BLU frequently pops up on my TikTok for you page, and I’ve been listening to her music for a while. She also went to my high school! Super fun to see her name in the puzzle today.

59a. [___ bag (rhyming collection of goodies)] –– My loose interpretation of “rhyming” led me to believe this was GRAB bag, but SWAG bag makes much more sense.

6d. [Name for a black-and-white cat] –– This was a pleasant, refreshing clue for the ubiquitous OREO.

Really clean puzzle, and a nice start to my Saturday.