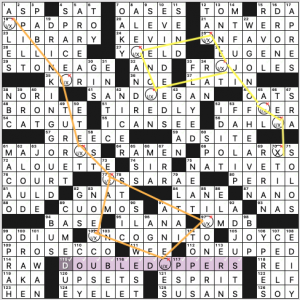 Complicated theme here: The Big Dipper and the Little Dipper can be drawn, more or less, by connecting the dots that are the rebus squares, the letter I in the Across direction and X in the down. Why I and X? I don’t know. The three longest entries explain the constellations some, as do some shorter themers:

If there’s a place in the puzzle where it’s explained why the letters I and X are used, it eluded my notice. Entries with those I/X crossings are IPAD PRO / AXLES, IN FAVOR / TAX, YIELD / ALEXANDRA, FRIJOLES / ON NEXT, KIRIN / SPACEX, SAN DIEGAN / SEVEN OXEN, IFFIER /AXL, DAHLIA / TEX, MAJORIS / ETEXT (*ahem* I have never seen ETEXT in actual use, grr, boo), POLARIS / XTINA, ISSA RAE / EXAM, IMDB / NIXON ERA, INCOGNITO / NO EXCUSE, DOUBLE DIPPERS / ANNEXES.

Whew! That’s a lot of moving pieces for one puzzle. Fourteen paired I/X answers plus two more theme answers not touching the I/X squares. Please thank your blogger for taking the time to trace out those constellations! (Or asterisms, if you insist.) It took time!

It’s time for dinner now, so I’ve gotta run. Will just briefly mention the worst entries in the mix: 31d. [Sharing maternal lines], ENATIC (I’ve seen ENATE as old crosswordese, but this -IC word form? Not sure I’ve ever encountered it before) and the aforementioned 50d. [Digital writing], ETEXT. There was a little more clunky stuff, but overall the fill was solid. Dang, Chandi! It must have taken so long to wrangle the fill to end up with this.

3.75 stars from me, was not not feeling the connect-the-dots vibe today but appreciated learning the various mythologies connected to these stars.

For those of you who are new to Captain Obvious, say hello. He is now part of your crossword family. He will be here to stay. As soon as you’ve forgotten about him, he shows up at the latest reunion, completely oblivious to the fact that you don’t exactly know how you’re related to him. He’s unapologetically loud, and is entirely unaware that when people rub their brows after he speaks, it is often in exasperation. In my mind’s eye (this time), he sports a mustache, glasses, eyes that scream excitement when discussing the mundane, a solid white button-down shirt (with a pocket protector), and a smile that betrays amazement every moment of the day. Today, he’s gnawing on some straw for extra measure. He’s not sure why, even though we know full well why. To him, it’s “just cuz.”

Even though no one is sure what side of the family generated his existence, you accept him as kin. You embrace him. In the way that you embrace a person when they call your name in the produce section at the local supermarket and they brazenly go in for the hug while you thumb through your mental Roladex trying to figure out who it is. Then, after small talk, you still have to pass the person in six other aisles before ending up at the same register.

Ya’ know. Unoffensive. But awkward. And yet, you’re strangely happy to have had the interaction.

I mean, you still embraced. 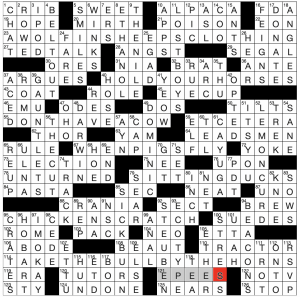 Yup. So obvious it hurts, but in such a good way. It reminds me of that recurring Jeopardy! category “Stupid Answers” where the correct answer is so literal that it’s almost elusive. I say “almost” because I’ve started taking advantage of Captain Obvious to try to set record times. I’m onto him. I came close to breaking the ten minute barrier today, which I don’t recall doing in any of Evan’s 21x (I could be wrong, I don’t keep track). There were only two theme entries here that I needed any crosses for: DON’T HAVE A COW and SITTING DUCKS. The rest? No probs at all. And isn’t it intensely satisfying to plunk in not one, but two 21-letter answers sans crosses?

THE CUT, Holly ROWE, EYE CUP (I think? Somehow I knew it and entered it, but I’m not sure why).

One thing I can promise:

Captain Obvious will be back.

Theme: Each of the four themed answers began with “GO” and ended with “AL,” stretching out “goal” across the puzzle. 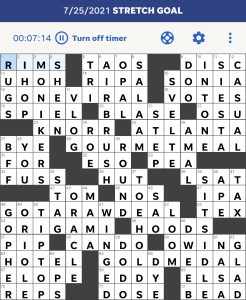 Overall, this was a cute theme, especially with the inclusion of GOLD MEDAL, the start of the Olympics on Friday night, and the mention of ATLANTA as home to the Centennial Olympic Park in 25a. “Stretch” was also a clever way of describing what was happening with each “go[…]al,” making it so that once I got one of the themers, it was easy to go back and figure out the rest. My only complaint was that I felt that “broken the internet” was awkward cluing to GONE VIRAL. I’m not sure it was necessarily enough, though I understand the need to avoid “went viral” as the alternative, but I think that that clue could’ve been tightened up a bit. Additionally, on a more positive note, “stretch” also implied a subtle fitness theme seen in two clues: 50d [“In ____ shape”] (TIP-TOP) and 70a [“Gym rat’s units”] (REPS), which was a fun bonus.

There was a really nice mix of clues in this puzzle. Going from the RIMS of 1a [“Car wheel accessories”] to the rosary BEADs of 72a [“Rosary part”], Zhouqin pushed for an expansive lexicon aided by a reliance on crosses. I struggled most with the upper middle portion of the puzzle where AIRBRUSH (6d [“Manipulate in Photoshop”) met TAOS in 5a [“___ Pueblo”].

Side note: TAOS Pueblo is a city in New Mexico, and it is “the only living Native American community designated both a World Heritage Site by UNESCO and a National Historic Landmark,” according to the municipality’s website. Learning more about it was a really interesting trip into indigenous history in the U.S., and I definitely recommend checking out pictures of the adobe buildings that make up the Pueblo.

Structurally, I missed having some longer answers and felt contained by the short left and right middle sections that each contained where you can see FUSS (34a [“Ruckus”]) and LSAT (38a [“Aspiring lawyer’s exam”]) on the left and right sides of the puzzle respectively. I don’t mind three-letter series; in fact, during particularly challenging puzzles, I welcome the three letter combos as an energy booster. However, in this puzzle, I felt like these sections either needed to include more three letter clues or longer answers. They felt disconnected from the rest of the puzzle because the grid secluded them in the way that it did.

A few other clues that caught my eye include:

I was definitely not feeling BLASE (20a [“Bored with it all”]) about this puzzle. It was a pleasing solve with, as I mentioned, a nice combination of clues that drew on a nice array of knowledge bases. That’s my SPIEL for today, folks! I hope that it’s not a stretch for y’all to meet each of your goals for this week (get it?).

Theme: Phrases with words starting GR- have the G removed to wacky effect. 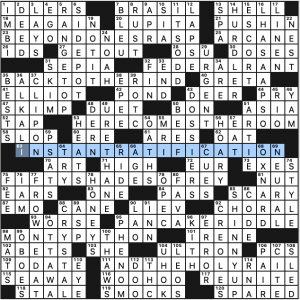 Hit and miss for me, mostly miss, though. The one’s that hit, didn’t strike me as particularly funny. I’ve tended to like most Universal puzzles I’ve done; this one just didn’t grab me.

The long fill hit-and-missed as well. Preposition-ended phrases are useful items in a constructors toolbox, but they often feel like missed opportunities, especially when they’re long like FROWNED AT. LHASA APSO just feels like extended crosswordese, and URETHANE (surfboard material) needed most of the crossings.

In other eyebrow-raising news, I’ve never heard the term SIDE POT, but then, I’m not a poker player. And “I’M BI” made me pause. I’m sure it’s been said before, but is it really a crossword-worthy phrase? I’M GAY is, sure, but I don’t think any other similar phrase has become part of the common vernacular. I guess the alternative in this spot (1d) is AMBO, old crosswordese for an old church pulpit, but that’s probably worse.

On the plus side, SHINNY UP is fun (though I wanted SHIMMY UP—turns out a lot of people mix these up), as is DOSSIERS, RANGETOP, “ME AGAIN,” CREOLES, HURDLER, “WOO-HOO!,” ULTRON, and OXNARD (used to live near there when I was a kid).

THEME: The letters M-E-E-T are substituted into common phrases (one at a time in that order) to create new wacky phrases. 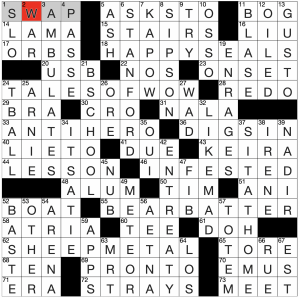 Very bizarre to see the revealer in 1-Across! And a long revealer at that. I was jarred by it and my brain didn’t immediately analyze the text, so I moved on and solved the puzzle, assuming that the theme would become apparent quickly. It didn’t. I stared at the grid for a while, refusing to go back and look at the clue for 1-Across, stubbornly insisting I would get it without the nudge. With tail between legs, I acknowledged defeat, then a forehead slap. So obvious and clever at the same time!

Really liked the base phrases and the resulting wackiness. The rest of the fill played just fine. Maybe a bit on the grandma-side imo… I never say SIT AT HOME when I’ve got a night to myself at my abode. That’s definitely something grammy says as she AMBULATES to and fro.

Shoutout to education in this puzzle too! B-SCHOOL! LESSON! ALUM!

Is TEE / T-BALL a dupe? Both T’s/TEE’s serve the same purpose. I didn’t notice it until just now. Curious, not critical of it.

Theme: FLIP PHONE (86d, [Motorola Razr, e.g., and a hint to each set of circles]). The other theme entries (in the Down direction) are familiar phrases that hide a word (going up) that can precede “phone.” 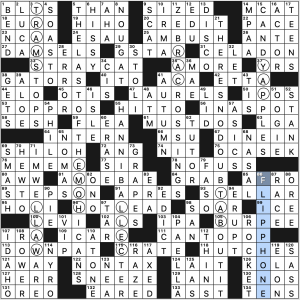 Fill eyebrow-raisers: HIT TO / SO AS TO / HEW TO and proper names LANI Guinier, Willie OREE, and Laura NYRO.