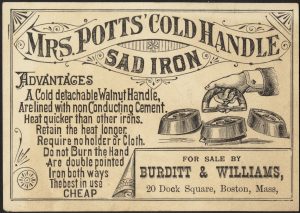 This week we’re told, The answer to this week’s contest crossword is a seven-letter word. I struggled to complete the grid, which is often a sign of a (more) complex meta mechanism at play. Unfortunately that knowledge doesn’t usually help to identify the solution. New to me: the (old) term SADIRONS. I am always down to learn Old English trivia such as: “The sadiron — whose name derives from the Old English word “sald,” meaning solid.”

The central across entry (SETAGOODEXAMPLE, clued as “Behave as others should”) was clearly thematic. I struggled to find a signal, trying to find patterns in 16a (ARTHURDENT) and 53a (THEMODERNS). Nothing clicked so I set the puzzle aside until morning.

In hindsight: I made two simple mistakes that prolonged my solving time. Mistake #1: I should have checked the clues after the grid failed to provide a signal. My “aha” moment hit me in the shower the next morning: e.g. (means “for example” in Latin) appeared in the clues. I grabbed the puzzle, hoping to find seven e.g.’s, and there they were: CAR (Neon, e.g.), POPE (Innocent, e.g.), etc.

Next step: the title implied each entry could be applied elsewhere. ACE jumped out as a CARD, but a QUEEN is also a CARD. Mistake #2: I didn’t circle the matching entries (I tried to find them by scanning the grid). Had I circled them: I would have quickly found there was zero ambiguity. I solve electronically, and that’s one of the pitfalls of that approach. 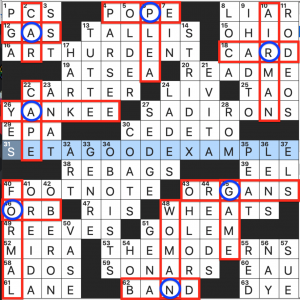 I eventually highlighted the entries with macOS’ Preview and everything fell into place: each matching grid entry crossed the clued entry:

The crossings spell PARAGON, our meta solution, and the definition of a good example. We’ll wrap up with a Queen (the band) song, a beautiful cover of You’re My Best Friend by Newfoundland acoustic trio The Once.