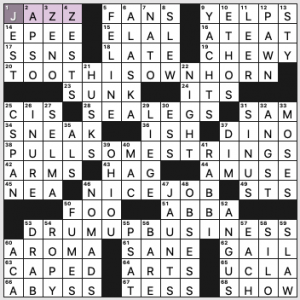 Quick post, subbing for Jenni. Revealer is 1a. [With 68-Across, what the trio in this puzzle’s clues is trying to promote], JAZZ / SHOW. The three themers are:

Cute theme! The three things all work as actions you might take to raise interest in your upcoming show.

Theme: Phrases whose first word is a synonym of “top.” 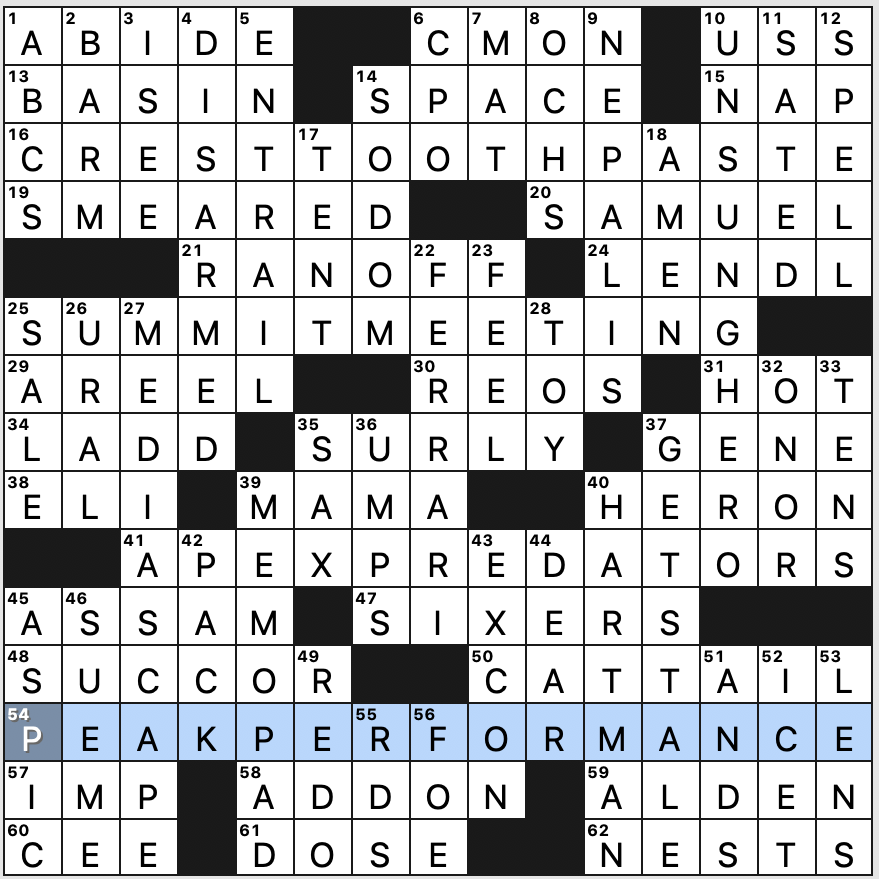 Hey, it’s a synonym theme, so there’s not a whole lot to talk about here. The meanings of the words don’t even really change, either. So it works, and it’s no doubt helpful for newer solvers, but there’s not a lot here to sink one’s teeth into. I do appreciate the length of these entries, especially the nice, grid-spanning ones.

BARM is new to me (2d, [Foam on fermenting beer]) and I resisted it for some time. It’s surprising to learn a new word in a Monday grid. OCHS and ASPIC are other non-Monday entries.

A solid theme good for newcomers. A mixed bag in the fill. 3.4 stars. 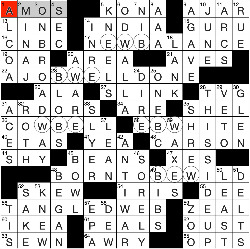 Phew! I’ve got my replacement keyboard and my solving times are back to normal.

I’m pretty impressed by this theme from Rebecca Goldstein. Starting with the revealer, 56A [According to Sir Walter Scott, what “we weave, / when first we practise to deceive” … and what appears in each set of circles], we get TANGLED WEB. Each theme answer has circled letters that include a “tangle,” or rearrangement, of the letters in WEB:

Two points of theme execution here: First, we’ve got some fun, evocative themers, with COWBELL immediately putting that sound in your head, E.B. WHITE and Charlotte’s Web as a nostalgia-inducer, and BORN TO BE WILD for some more ear candy. Second, the constructor included all six permutations of those three letters between the theme entries and the revealer. All this in a grid that’s totally Monday-appropriate. Brava! 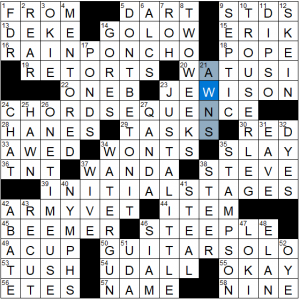 For the second Monday in a row, I struggled in multiple places in this BEQ grid, but everything cleaned up quickly at the end. It didn’t help that I kept trying to find a theme in the grid that has its longest entries interlocking instead of stacked.

I wasn’t particularly wowed by the long answers, but the parallel middle downs (5d – [“That might not happen”]) DON’T BET ON IT and (23d – [“Not so much for me!”]) JUST A LITTLE are a small highlight. It’s a nice touch in a themeless IMO when symmetric long fill has a little something in common. 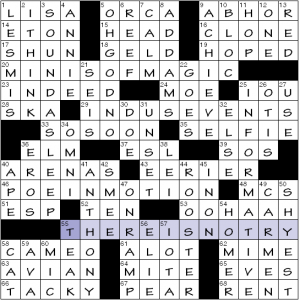 The presumed inspiration/revealer entry for this one is pretty good.

Decent bit of fun to start the week.

I did a little poking about, and apparently people have produced philosophical meditations and documentaries on this bit of wisdom. Feel free to check them out. (I have not, hence won’t be sharing them here.)

Theme: The first words of the theme answers are words that can come after the word “first” 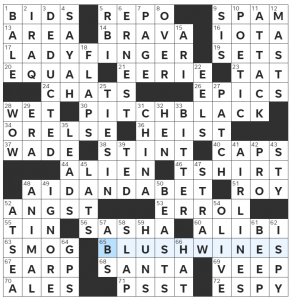 Good morning folks! I hope you all enjoyed the Boswords tournament yesterday, and are as excited as I am for the fall themeless league’s line-up of constructors.

I wanted to note that Amanda Rafkin edited this puzzle– she edits a lot of the USA Today puzzles now. I just wanted to draw attention to that because a lot of people know Erik Agard as the editor, but it’s been both of them for more than a few months now.

Things that made me say hmm: 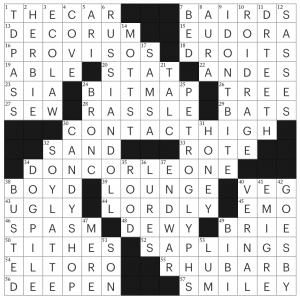 30a. [Buzz from next door, say] — Intercom?  No, CONTACT HIGH. Fantastic misdirect for this one—I had an audible “aha” moment when I got this from the crossings.

54a. [One heading to the Spanish cape?] — A world-class clue for EL TORO. While you might think of a vacationer on first glance, the Spanish bull, TORO, “heads” to a cape-wearing matador. Deliciously elusive clue.

55a. [Heated argument] — RHUBARB tends to pair better with strawberries than straw men, but I learned a new definition for a summer staple today.

6d. [Emmy-winning Natasha Lyonne series that debuted in 2019] — RUSSIAN DOLL is one of my favorite shows today, and I’ve been anxiously awaiting the second season since it was confirmed in June 2019. Production slowed because of pandemic-related challenges, but my fingers are crossed that it’ll premiere soon! Fun to see this entry today.

30d. [50 cent hit with the lyric “One taste of what I got / I’ll have you spending all I got”] — Unexpected pop culture cluing for CANDY SHOP, which was a pleasant surprise.

34d. [Possible result of a fumble] — Good mental image with DOG PILE, but keeps on line with several other sports terms that caused me trouble in this puzzle.