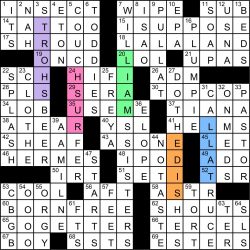 Good day, everyone! Here is hoping things are well with you today as you all stay up and watch some live action of the Olympics! (At least that’s been part of my routine over the past couple of days.)

There’s a little backwards thinking that needs to be done to understand the theme of today’s grid, with long down answers featuring a series of circles that have to be read from bottom to top. When doing so, a word that describes a type of “order” is revealed.

Can’t say that I’ve ever had a PLUM PIE during the summer, or at any point in my life, so I trust you to tell me what I’m missing, if anything (16D: [Fruit-filled summer dessert]). Loved seeing the clue for HERMES, as it now makes it pretty clear as to the idea of naming the Futurama character who runs the Planet Express delivery company Hermes (46A: [God of commerce]). Of course, the animated version is Jamaican and does not have winged shoes. Only downside to the puzzle is that the title song to BORN FREE is now firmly embedded as an earworm at the moment (60A: [Story of Elsa the lioness]). Great song, but not the one I need in my mind as I’m getting ready to ride a train for about 45 minutes!

“Sports will make you smarter” moment of the day: LOB (34A: [Arced tennis shot]) – We’re talking baseball and not tennis, and one of the more eccentric yet exciting moments in the history of the old Yankee Stadium. On Sept. 9, 1981, New York Yankees pitcher Dave LaRoche uncorked an “eephus” pitch that soon came to be known as “La Lob” or “La La Lob,” a high-arcing, super slow pitch that baffled some of the game’s best hitters. As the story goes, LaRoche was approached by new Yankees manager Bob Lemon, who asked if he wanted to pitch to or walk one of the feared power hitters of the time, the Milwaukee Brewers’ Gorman Thomas. During that pitching mound visit, LaRoche asked Lemon if he could throw his curveball. Lemon, who had not seen LaRoche pitch before that night, ended up green-lighting the idea. What ensued was sheer hilarity…and a strikeout! 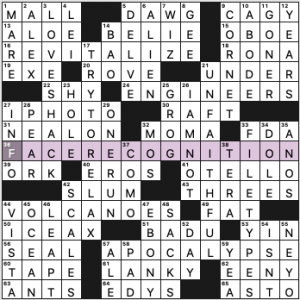 The name of the game is FACE RECOGNITION, or 36a. [Technology used by smartphones nowadays … or a hint to the ends of 16-, 24-, 44- and 57-Across]. And facial features are hiding in those themers, with altered spellings:

I like that there’s one NOSE and a pair of the EYES, EARS, and LIPS. Not a singular/plural odd-one-out, just a reflection of the standard set of facial features.

We have a very nice debut today with a punny title and revealer. 41a is MIDDLE C clued [First note learned on the piano, and a homophonic hint to the starred answers]. The other theme answers are familiar names and phrases whose central letters spell out the name of one of the world’s seas. 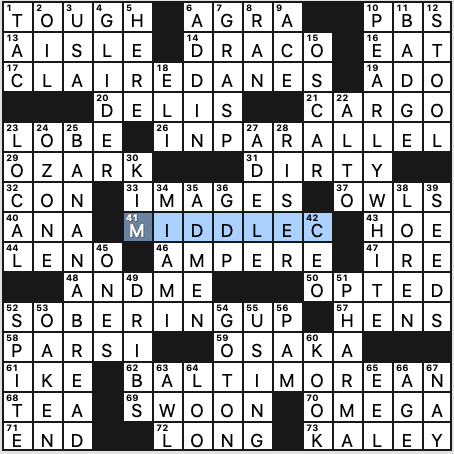 As I said, very nice. And in an elegant touch, each sea is in the exact middle of each entry. A suitably impressive debut!

I love the long fill today with PEARLY WHITE (though it’s probably better in the plural) and BANANA BREAD (clued [Much-baked item during the 2020 lockdown]).

I got hung up on AND ME [“Aren’t you forgetting somebody?”], because I didn’t slow down to pay attention to the crossing AD MEN for which I had AD MAN. This turned 48a into ANDMA which was obviously nonsensical. Finding my error didn’t make me feel much better.

PARSI [Zoroastrianism follower] was a new one to me. Per Wikipedia, the word means “Persian” and refers to those who left ancient Persia following the Muslim conquest of 7th century CE and migrated to India. I also didn’t know actress KALEY Cuoco.

THEME: Common phrases parsed as if they are occupations, clued wackily. 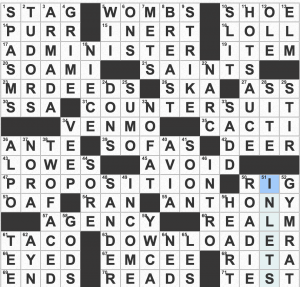 The theme didn’t arouse much excitement in me. I think it’s because I feel like I’ve seen this theme more than a few times (or some variation on it, but always with a play on a wacky career). They don’t all land as solidly as I would prefer, and with PRO POSITION being pronounced completely different from its base phrase (and AD MINISTER to some extent as well), there’s a touch of inelegance there I suppose.

Also, I should note I’m at my workplace and can’t access the AcrossLite file (forgot to download it ahead of time) so I had to solve on the webapp, which is sorely in need of an update (I feel like I used that same app to solve crosswords online back when crosswords first started offering an online experience). That almost always negatively affects the solve experience for me.

Grid itself was just fine in the hands of the prolific Gary Larson!

Fun stuff to learn, even if the theme wasn’t my fave.

Another great puzzle today! For me, it was a bit tricker than most so it took longer to solve. 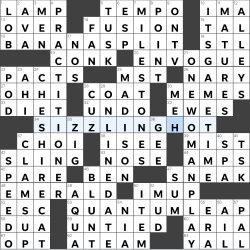 Today’s title pairs the right-most word in the clue with the word “second”, making the different types. So from BANANASPLIT is “split second”, SIZZLINGHOT is “hot second”, and QUANTUMLEAP is “leap second”. The last one for me isn’t as quick on the tip-of-my-tounge but is a crucial adjustment necessary for keeping time coordinated. I’ve heard of it only because I geek out on Leap Years since I find them oddly fascinating and have a relative who was born on a leap day (yes, she’s heard all of the age jokes especially from her brother over the years). Also, another layer could be that they all occur very quickly, being brief. Leap seconds, by the way, happen about every 21 months—unfortunate that it’s not every 29.

Stumpers: COAT (only “soft” and thoughts of my cat licking her fur came to mind), NARY (not a common phrase for me personally), and IMUP (maybe adding “already” to the quote would have gotten me there).

Having done a month’s worth of write-ups now, themes are much more at the forefront of my mind when solving. Sometimes it’s tough to try to hold onto figuring out the theme while filling the grid, especially when also being mindful of time and wanting to solve as quickly as possible. However, days like today, everything flows (even if slower than my usual) and the themers are a lovely set that exemplify the theme. There’s nothing better than a great puzzle, theme, clues, and fill! 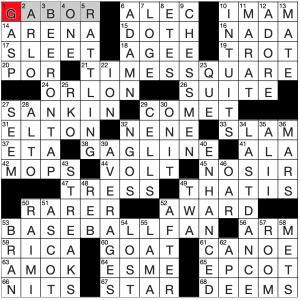 I have been square dancing, and I think I have done the electric slide a time or a thousand, but that is about it for me! I am quite sure NO ONE wants to see me doing a fan dance! Nice puzzle, Winston! Maybe I am now inspired to go take ballroom dancing lessons! 4.4 stars today. 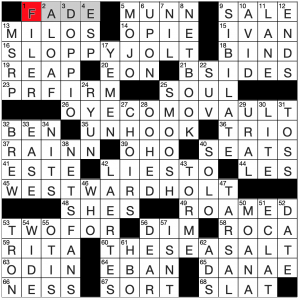 Let’s add “lieutenant” to some words and phrases and let hilarity ensue! OK, it might be easier just to add the letters “LT” instead!

In reality the LT “sound” is more of how I would describe this, since the original phrases spellings are slightly altered, but you get the drift. I suppose you could add the letters LT to the middle of some phrases without changing any spellings, but I’ll bet that’s hard. And it wouldn’t be nearly as funny! Matt does a great job as usual of providing some humorous entertainment. I don’t see much obscure trivia, so perhaps an accessible Jonesin’! I did notice the off-numbering in the last theme answer though. Maybe I am missing a gimmick? 4.2 stars from me.