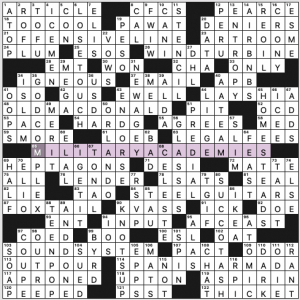 A bunch of brand names appear in lowercase to clue things those phrases could be:

So the theme feels a little uneven to me, but it’s a clever idea.

Did not know: 44a. [___ Clarendon, first openly transgender W.N.B.A. player], LAYSHIA. So I Googled the name. He/she/they (the nonbinary Clarendon uses all three pronouns—is NB, trans, male, and female) was featured in a terrific ESPN article a month ago, as luck would have it. They’ve been a leader in the WNBA’s players’ association and a fighter for social justice.

Meta time! And it’s a music meta. Pete Muller would be proud! 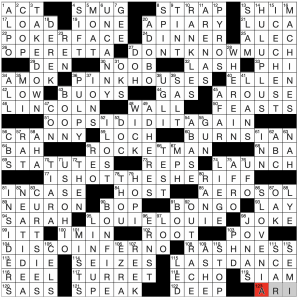 Nice little walk down memory lane with some of those entries. The only titles that eluded me were DISCO INFERNO and DON’T KNOW MUCH. I very much know the songs, just couldn’t remember the titles mid-solve.

Now, on to the meta!

According to the hint, we are looking for a Billboard Hot 100 song from the last decade. I got this meta relatively quickly after my first two ideas instantly failed. The first idea I had (it’s not original at all) was to anagram the first letters of the theme entries. PDPIRSLDL. Nope! That’s not gonna do much. The next idea was to look up all the years that these were hits and see if that had any correlation to the grid. Perhaps, because DISCO INFERNO peaked in 1978, box 78 in the grid would contain a meta-necessary letter. I wasn’t looking forward to googling all the years, and luckily I stopped myself short because there is year given in the clue for OOPS I DID IT AGAIN [No. 9 hit for Britney Spears on her 2000 album of the same name]. It would be awfully inelegant to include just one song that a year in the clue if we were meant to be looking them all up.

My third guess was correct: Each theme clue starts with the resulting song’s peak position on the Billboard Chart. What if we simply referenced the letter in the entry that is in that same position? For instance, since POKER FACE was a “No. 1” hit, we look at its first letter, P. Bingo!

POSITIONS! By Ariana Grande. Who – not-so-coincidentally I’m sure- is included as a sly little half-reaveler/half-wink in the very bottom right in the grid: ARI.

Excellent, tight meta! And it works as a stand-alone puzzle too, so hopefully the meta-haters are kept at bay. I’m wondering about the process in finding symmetrical entries that worked to spell it out. How much did Evan have to SIFT through? Luckily, the letters in POSITIONS are all relatively common, but I bet there was some digging involved.

Grid itself was pretty easy. I landed somewhere in the 12 minute range, which felt fast. I stumbled badly in the southwest: GOOD IDEA / COOL IDEA / NICE IDEA all before… NEAT IDEA! ALF before ITT. US MAINE instead of USS OHIO. Those slips and crossings that I wouldn’t have gotten without nudges made it very tough for me down there. Luckily I came to my senses with the ship name (it’s always U.S.S.!) and things fell into place.

Thanks for this one, Evan! Enjoy Sunday!

I’m back! Did you miss me? I have to give a shout-out to American Airlines. We flew from Monterey, CA to Philadelphia yesterday, connecting in Phoenix. Our flight out of Monterey was delayed for three hours and landed 20 minutes before the scheduled departure of our flight to Philly. They held the plane (it wasn’t just us – there were maybe six or eight people, total) and not only did we get on, but so did both of our checked bags. It’s a travel miracle.

On to the puzzle! This theme comes in twos. The first of each pair is a phrase including a color which also serves as the clue for the second answer. 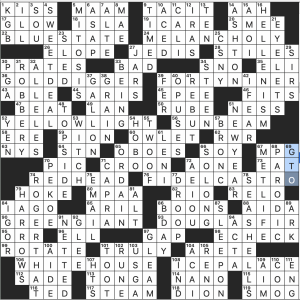 I liked this theme with the exception of 36a, which I could happily never see again. The idea is original and all the answers are solid. Nice!

Lots of unpacking and laundry ahead, so I’ll skip right to what I didn’t know before I did this puzzle: that Maracanã Stadium is in RIO.

Did you know…it’s National Orgasm Day and International Female Orgasm Day! How are you celebrating? Actually, it was yesterday, July 31, but it’s worth celebrating all weekend long.

This puzzle gets in on The Act by having thematic O’s move up to a climax. Ostensibly it’s because the O’s represent “balls” (uh-huh), which are “picked up” from the lower phrases and added to the upper phrases. But we know what’s really going on. *wink wink* All right, admittedly there’s nothing about this puzzle that indicates it has anything to do with National Orgasm Day, but it sure is a coincidence. Now that you know, constructors, start prepping your letter-O themed puzzles for next year. 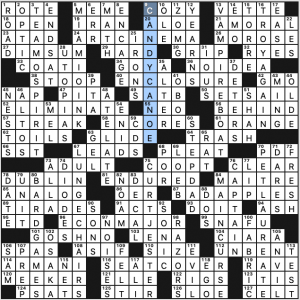 In the new-to-me category we find ZOMG [Astonished text]. There doesn’t seem to be a definitive origin story for why the Z is added to OMG, but here’s a listing of possibilities. It may just be a typo that stuck, similar to “pwn.”

Solid puzzle, good execution of the theme. Now go and celebrate the day however you see fit! Four stars.

THEME: “IT” can be found in both words of a common two-word phrase. 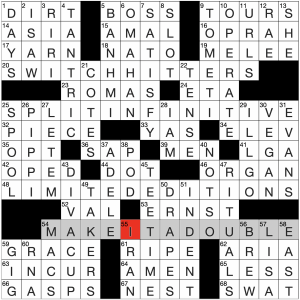 Took me quite a while to see the theme after I had finished the solve and gotten the revealer. It’s easier to see it now with the words separated, but in the grid my eyes were drawn to the “double” nature of HH and TT in SWITCH HITTERS. The IN – IN double in SPLIT INFINITIVE. The ED ED double right in the middle of LIMITED EDITIONS. I’m a bit surprised that didn’t raise eyebrows before publishing a theme with a “double” gimmick. But if you emphasize the IT in MAKE “IT” A DOUBLE, you have the true revealer. Glad I figured it out!

Lots of new stuff to me:

I AM, I SAW, I’LL GO seemed a touch repetitive.

Enjoyed the cluing all around and the opportunity to learn a few things. I’m out to lunch on the theme as presented just because I think there were lots of “doubly” lookin’ things in those entries that had nothing to do with the theme.

Theme: The word “RARE” appears in the middle of each themed answer. “Rare” could be defined as “few and far between,” so that’s what the title is alluding to in this puzzle. 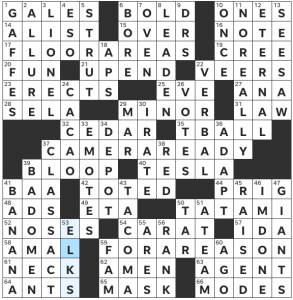 I appreciated the challenge of this theme in using a definition for the hidden word rather than putting it directly in the title. I got FLOOR AREAS and FOR A REASON first, so initially, my thought was that the theme had something to do with “far” since F and AR are split up in both of those answers. I had to stare at CAMERA READY to see it.

There were a lot of long answers in today’s puzzle, with only short bursts of 3-letter areas that allow the larger ones to take the spotlight. Content-wise, it was a great mix of clues, from poets to train sets to fashion. A few clues could’ve been stronger in my mind. I felt like 39a [“Stereotypical robot noise”] was a stretch for BLOOP, and we saw both A LIST and A TEAM in 14a [“Lineup of VIP guests”] and 51d [“Lineup of first-string players”].

However, there were plenty of clues and answers I was excited about: