Now I have Bob Seger in my head. I figured out the theme early on, and I found the revealer less than satisfying. 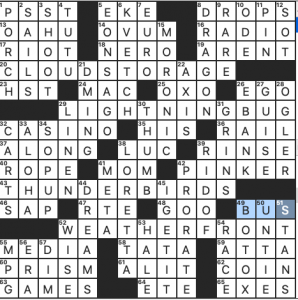 and the revealer at 52a is [What precedes a storm…or a hint to 20-, 29- or 43-Across]: WEATHER FRONT. I’m not crazy about this answer. The obsessive Weather Channel-watcher in my house says “front,” not “weather front.” Is this a thing people say? I like the cloud/lightning/thunder trio much better than the anticlimactic revealer.

What I didn’t know before I did this puzzle: that NERO said “What an artist the world is losing in me!” before he died. Then again, it would have been difficult for him to say it after he died.

And, since I teased it up top: 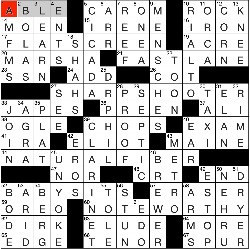 It’s a musical Monday in the LAT, with the revealer at 60D [Distinguished … and what 17-, 24-, and 44-Across literally are?] giving us NOTEWORTHY. That is, the first half of each theme phrase or compound word (FLAT, SHARP, and NATURAL, respectively) can be used as a modifier for a musical note:

This is certainly not the first time I’ve seen FLAT, SHARP, and NATURAL as the basis of a theme, so if you’re going to do it, I think you’ve got to pick really fun theme entries. These are not hitting the mark (hitting all the high notes?) for me. I’d love to see more evocative themers than these.

Perhaps super-sparkly fill could have saved it, which I’m sorry to say this puzzle doesn’t have. The NW corner with its crosswordese-y plurals of AMFMS, BOLAS, and ENTS crossing the tough MOEN and MARSHA is the most obvious example. How about cluing that last as Stonewall icon MARSHA P. Johnson, who I think is better remembered than an actress from a 1977 movie? JAPES crossing PLAT, ORCA, ESTOP, ELAN, AGRA TOLE, ONE A.

Also, although BREWER and DIRK are fine entries, I’d sure love to retire “[sports league abbreviation]er” from puzzles permanently, so “MLBer” and “NBAer” in the clues for 46D and 62A, respectively, annoyed me.

So I’m sorry to give this puzzle a “meh.”

(Note: I’m very distracted while blogging this since I’m watching USA vs. Italy in women’s volleyball.) 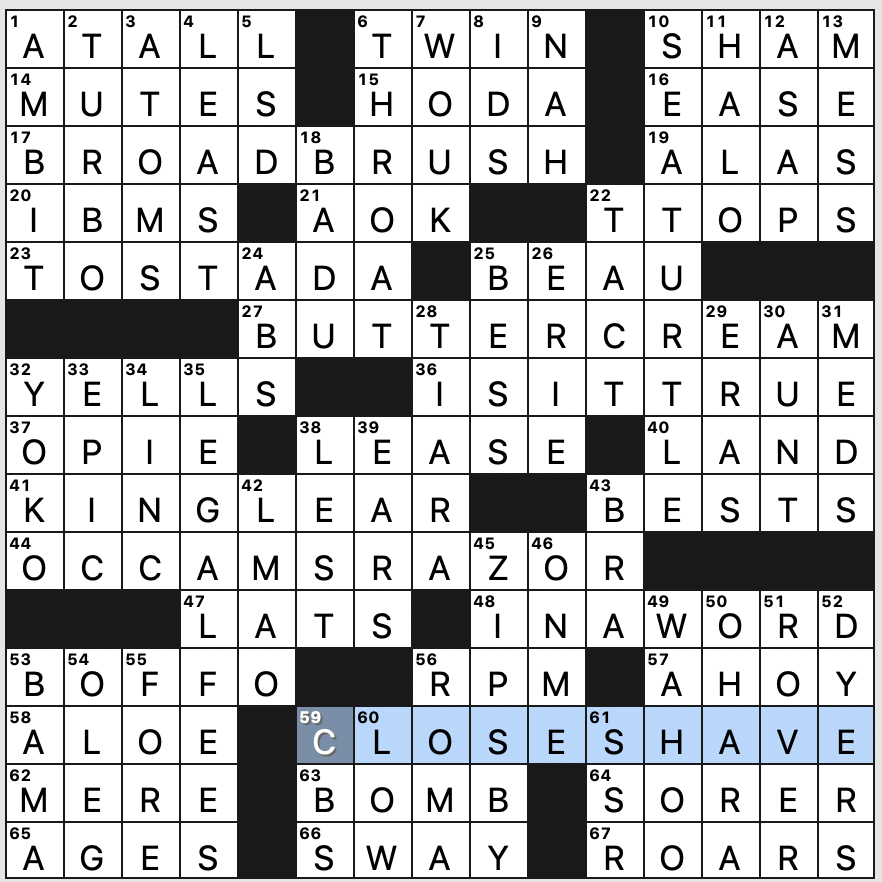 It doesn’t feel right to call shaving cream just “cream,” so that detracts from the effectiveness of the theme for me.

Having only four theme answers of 11-letters or less leaves room for smooth fill and fun long entries, and we have a good set here with SEA TURTLE, LEGAL FEES, “IS IT TRUE?,” TOSTADA, and KING LEAR.

DYERS and SSR are at the other end of the spectrum, but they come right at the end of the solve in the SE corner, and they’re easily blown past.

The only clues I’ll note are part of a “mini”-theme in the NW corner—[Even a little], [Tiny bits], and [Tiniest bit]. I wondered if they were part of the theme at first, so I found this distracting.

The theme feels light and not entirely on target. Smooth fill, though. 3.3 stars.

And oh hey, the US women just won. But it was a CLOSE SHAVE. 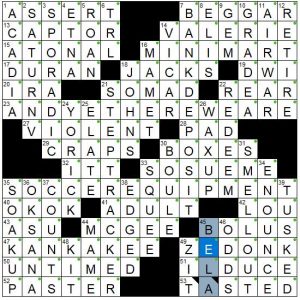 Fun-looking grid design from BEQ today: two grid-spanners and two long downs bracket an interrupted stairstack (vertically and horizontally) and provide access to the corners, two of which are substantially more connected than the others.

I moved nicely through my solve largely on the back of those 15s: AND YET HERE WE ARE (23a – [“Don’t know how it turned out this way”]) and SOCCER EQUIPMENT (35a – [Arsenal gear, e.g.]). That’s Arsenal of the English Premier League and Women’s Super League, with a disguised capital in the clue. On the former, I’ve really grown to appreciate entries like these – Robyn Weintraub and Tim Croce come to mind – and it’s such a highlight when the clue is also a spoken phrase that matches the entry in tone/formality/whatever other pragmatics, as I believe this one does.

The other area I’ll highlight before bullets is the SE corner, which was brutal for me, especially when I’m running late this morning. BELA Schick (45d – [Shick who founded the Schick test for diptheria.]) is new to me, and while I know the word BOLUS (45a – [Horse pill, perhaps]), I haven’t seen it in the veterinary sense before. ZEDONK is a colorful entry; ENOUNCE a little less so for my money.

Theme: The last word of each of the theme answers is a municipality. It’s a nice touch that they appear in ascending order of size. 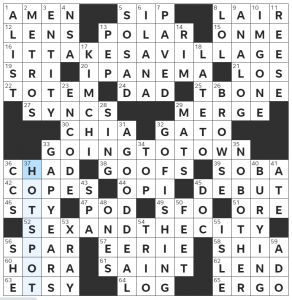 This grid has mirror symmetry to accommodate theme answers that are of different lengths. I’ve recently made a couple of mirror symmetry grids and am now intimately familiar with how constrained the layouts can be.

Rafa did a great job with the mid-length / longer fill in this. I loved:

I always appreciate a call-out to my (and Rafa’s) favorite artist: DEBUT (45A) was clued as “The album ‘Taylor Swift’ for Taylor Swift.” 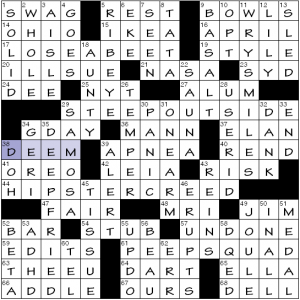 Very briefly today. Phrases that contain a one-syllable word whose only vowel is E, then that E is doubled.

Got to peel out. 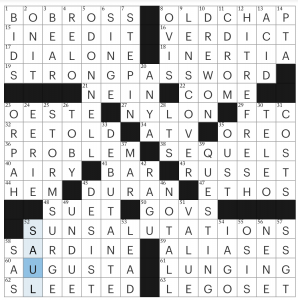 Nice New Yorker puzzle this morning. The long fill was great, and the grid felt relatively cohesive. The corners got a bit gluey, but overall didn’t give me too much trouble.

I felt that several of the punny clues fell a bit short—it’s not that they were bad, per se, but they didn’t feel particularly exciting. [One in a tight spot?] for SARDINE, [Came down hard?] for SLEETED, even [Canon part?] for LENS COVER—all were a bit shy of an aha moment. The question marks felt extraneous for the first two, and though the misdirect for Canon would have been solid, “Canon part” isn’t really a common phrase. This doesn’t really detract from the quality of all of these answers; it just makes me feel like they didn’t reach their full potential.

Onto the rest of the clues.

1a. [Onetime PBS host called the “godfather of ASMR”] — I’ve recently been on a BOB ROSS binge, and, as such, I’ve latched onto the phrase “happy accidents.” Well worth incorporating into your vocabulary.

19a. [qX3;nE7%sX9*zL4, e.g.] — My fingers got a workout just typing out this clue for STRONG PASSWORD. I’d like to imagine there’s some poor soul out there who, in doing this puzzle, had the spook of their life when they saw their actual randomized password typed out for all to see.

21a. [German pass] — Cute clue for NEIN. Thought of a pass as a ticket, a successful grade, and a sports maneuver before I thought of dissent.

52a. [Sequences that often begin yoga classes] — Not much to say here except that SUN SALUTATIONS was a nice long entry. I got it right away, which is always a good feeling in a puzzle.

63a. [Gift that’s sold in pieces] — Nostalgic entry with LEGO SET. For some reason, I always think of Ed Sheeran’s “Lego House” when I see this phrase. Enjoy.

12d. [Get an update, maybe] — I really liked HIT REFRESH here. Two word long answers—especially verb/noun combos—tend to fall flat for me, but this was a satisfying entry.

33d. [Ball girl?] — Great misdirect for DEBUTANTE, with a clue that fits in nicely with the other sports references in the puzzle.

37d. [Nick, say] — I don’t like to get too caught up in semantics, but is “nick” really a synonym for MAR? They seem like opposites to me: a “nick” is a tiny, insignificant scratch whereas “marring” someone implies a much more permanent, grave outcome. I may be missing a definition of one word, but this seems like a poor cluing choice.

39d. [Knight work] — QUESTING is a word you don’t see often outside of video games nowadays, but is a delightfully evocative one. If you ever want to add intrigue into your daily life, categorize your errands as side quests. It makes chores far more appealing (I promise).

Not too difficult, and a solid opener to the solving week.