This week we’re told: The answer to this week’s contest crossword is a well-known science fiction writer. There are four authors in the grid: 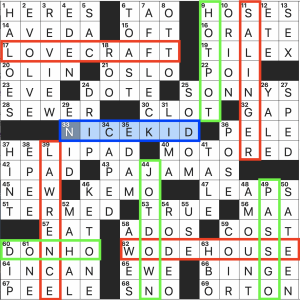 All go by their first two initials. There are four matching two-word entries in the grid:

There is one other two-word grid entry with no matching author: NICEKID (I got deked by HELIPAD for a moment, but that’s one word). Final step: find a “well-known science fiction writer” who goes by the initials N.K. That matches N.K. Jemisin, our meta solution.

N.K. Jemisin is the author of the Broken Earth trilogy (among many other books), which has sold over 2 million copies. She has won a pile of awards, including four Hugo Awards (winning three in a row for each book of the Broken Earth trilogy, a record), four Locus Awards, a Nebula Award, and many others. And, from a fun crossword perspective, the trilogy was also featured in a recent Jemisin-themed meta by Lisa Grossman and Ada Lerner in The Inkubator.

Jemisin courageously faced horrific racism from “Vox Day” (former member of the Science Fiction Writers of America) and his white supremacist allies as part of the “Sad Puppies/Rabid Puppies” campaigns. This article provides an overview of the racism Jemisin faced. Mainstream articles often gloss over the terrible specifics involved; the next link has actual quotes. Trigger warning: they are truly awful. We’ll end with Jemisin’s amazing 2018 Hugo acceptance speech.