This one passes the Breakfast Test. All theme answers are familiar phrases whose last word is also a word used in cereal names. 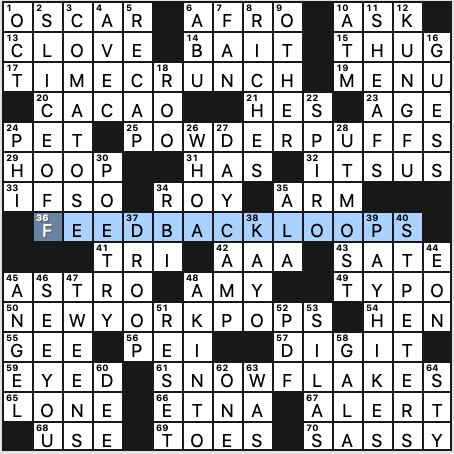 This is a really nice theme. It feels fresh, there’s some cute wordplay going on, and yet everything is familiar and gettable. Perfect.

Plus there’s some sparkly long fill even though some of it passes through two themers: COMATOSE, DAY CAMP, PAY HIKES, and ST. PETERS. On the shorter side I like KUNG FU, UTMOST, TWEENS, and “SEE YOU” (although it feels a little more rigid than the more common “See ya!”)

Oh, and if you have any insight on how the constructor pronounces his last name, I’d love to hear it. 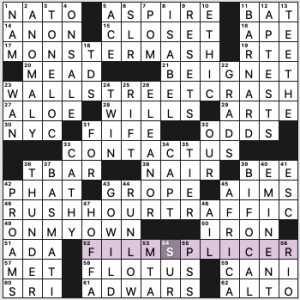 It wasn’t till the fourth themer that I began to understand what the theme was doing, and then the revealer confirmed it: 52a. [Editing device suggested by 17-, 23-, 33- and 46-Across?], FILM SPLICER. I didn’t know there was a device by that name, but there is. Here are the movie pairs that are “spliced” together to make familiar phrases:

It’s neat that the words MASH and CRASH evoke the merging together of two things, though US and TRAFFIC don’t quite work the same. Would have been an amazing extra if all four connoted “splicing,” but I still enjoyed the theme without that.

I’m not feeling called to comment on anything else in the puzzle. Long day! Four stars from me.

Adam Wagner’s Universal crossword, “They’ve Got Your Back” — pannonica’s write-up 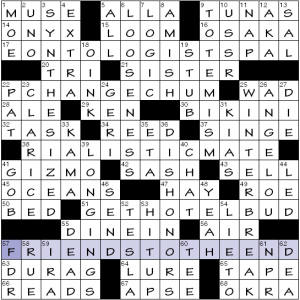 Bit of an odd mechanism for the theme, entries, but as the in-clue instructions were explicit, I was able to start filling in those answers right away.

As you can see, I was sold on the theme … eventually. 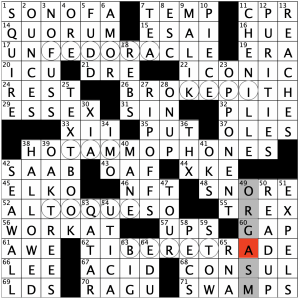 AVCX editor Ben Tausig has this week’s puzzle, and it’s a fun twist on the standard “add a letter, make things wacky” theme:

A few other nice bits of the grid: QUORUM and CONSUL, both “an image Thotokos holding the child Jesus or Dolly Parton” being described as ICONIC, SQUIRE, CHENILLE, and OAK TREES described as “Honorable”. 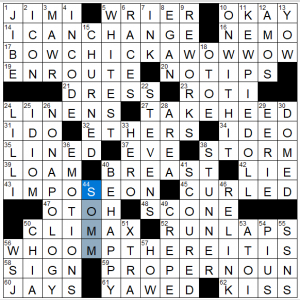 Enjoyable as always from Aimee, with two long answers holding the marquee spots: BOW CHICKA WOW WOW (17a- [Sound of sexy times?]) and WHOOMP THERE IT IS (56a- Tag Team single often played at basketball games.]). Two entries that are just fun to say aloud, though I always thought it was “BOWM” CHICKA WOW WOW, with a nasal consonant in the first word. Anyway, fun stuff for the middle of the week.

Other than JIBE (1d- [Agree]), which I can never keep straight with “jive” (would love a mnemonic in the comments, if you have one!), I had no issues, so right to the notes:

We’ll close with something from JIMI (1a- [Hendrix who was the final performer at Woodstock.]):

Theme: “It’s Not The Real Thing” – each of the theme answers is the manmade version of a natural thing/material. 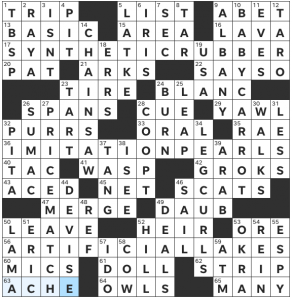 I’ve blogged a lot of CC’s puzzles during my first month at Fiend, and this theme  didn’t excite me as much as hers normally do. I think this is because I personally don’t find the theme answers to be very interesting as stand-alone answers, although they are all totally legitimate things and I do appreciate that they’re all 15 letters long.

Despite my thoughts on the theme, I enjoyed solving today’s puzzle, mainly on the strength of the fill. PRICE MATCH and BABY CARROT are snazzy answers, as are CHAIN SAW and LEG CURLS! You can always get me with food clues/answers, and this puzzle had a bunch, including LATKE, OKRA, SUMAC, and two different references to hummus. The only piece of fill that seems difficult to newer solvers is GROK, which I myself only learned from solving puzzles. Honestly I’ve only heard GROK in the wild as part of the crossword discourse (people saying “It took me most of the solve to GROK the theme” and things like that), so to me it feels amusingly meta every time I see it itself in a puzzle. 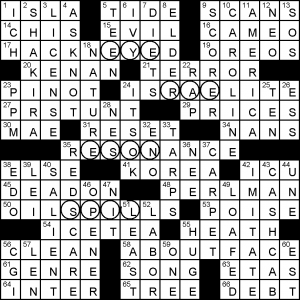 Sean McGowan’s theme today features a basic theme type with some odd wrinkles. ABOUTFACE is the revealer and four circled parts of answers are parts of a face read right to left: EYE, RAE, ESON and SPIL (which is pluralised, unlike the others). You noticed, of course, that EYE is palindromic. I’m not sure if that counts as a feature or a bug?