Fireball is on summer vacation until September.

Before I even started this puzzle I noticed the striking layout of the grid with its huge, wide open corners. Further, it was obvious the theme would be located in said corners due to all the circled letters therein. 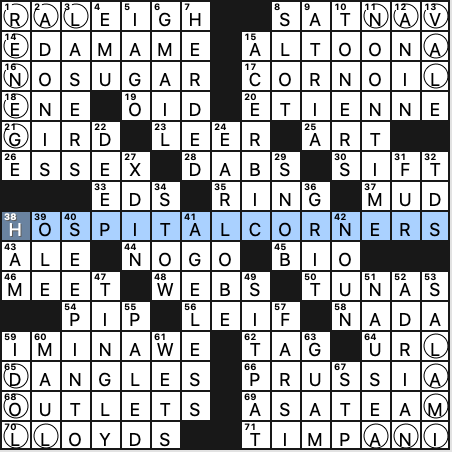 The revealer, however, comes right in the middle: HOSPITAL CORNERS (38a, [Institutional bed-making technique, and a hint to this puzzle’s circled letters]). Each group of circled letters spells out a word that can precede “hospital” in a familiar phrase.

The four words are

Of these, “doll hospital” is the only phrase that was new to me. I thought it meant playing doctor to one’s dolls, but looking it up online I see it’s a term referring to toy (and specifically doll) repair and restoration. We have a Toy Rescue Mission here in Tacoma, but nothing that’s called a “doll hospital,” AFAIK. Was this term new to you, too, or is it widely known?

With such big corners, I was prepared for some kludgy fill. But about the only thing I see in that category is the partial AN IN. Everything else is solid-to-quite-nice: EDAMAME, ALTOONA, CORN OIL, “I’M IN AWE, TINGLY, SIT PAT, PRUSSIA, and of course GUAM (I’m from GUAM, BTW). And there’s EARLOBE in the center as well. NOONTIME is a little uncommon, but it really reminds of a girl I knew in college who would never say “morning” or “evening,” it was always “morning time” or “evening time.”

Oh, I really resisted putting in XDIN [Filled, as a survey box], since crossword convention seems to favor “EXED”. That was probably the biggest sticking point in the grid.

Impressive grid given the theme constraints and the openness of those corners. 4.25 stars. 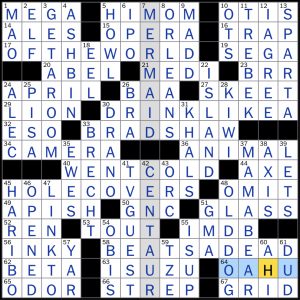 We’ve got two shaded sets of squares in Adam Wagner’s NYT today, so let’s start with those and see what that leads us to:

Well, that’s almost a theme.  There are a few clues associated with each of these answers that makes things a little bit more robust:

Aha!  A MERMAID is half-woman, half-fish, and splitting it into its component halves, we get WOMAN OF THE WORLD (or a sophisticated lady) and DRINK LIKE A FISH (or tipple and then som).  Similary, the half-man, half, horse CENTAUR allows us to make MANHOLE COVERS (“circles around the block?”) and BEATS A DEAD HORSE (“keeps arguing after something has been decided”).  It’s all very lovely, and I loved discovering how this theme all fit together. 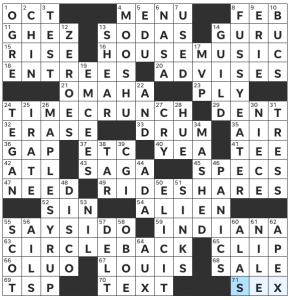 Theme: “Full Frontal” – The first word in each theme answer can follow “full” to make a new phrase.

The theme here is pretty simple, but all of the entries are fun on their own, each of the created phrases is a real thing (and all are interesting phrases themselves, to boot), and the title made me smile and gave me a solid hint to what was going on in the grid. What more could I ask for?

This puzzle was stacked with great fill throughout. MAPLE SYRUP is the only condiment worth putting on pancakes in my opinion, and I am glad to see that this puzzle agrees with me. I wonder if any solvers would fall in to the picky vs. FUSSY EATER trap – Luckily for me I already had the first F locked in. (Side note that having to count two months before and after December for the answers OCT and FEB was… surprisingly difficult first thing in the morning). I didn’t know Andrea GHEZ, Ijeoma OLUO, or ADA Limon, but all the crosses were fair and I was happy to learn more about them! My favorite clues today were 12d [Round numbers] for ZEROES and 71a [___ positive] for SEX. 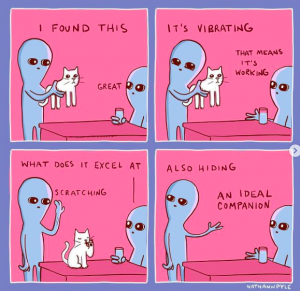 Theme: Each answer takes a common phrase and twists it to include an “EE”/”EA” sound. 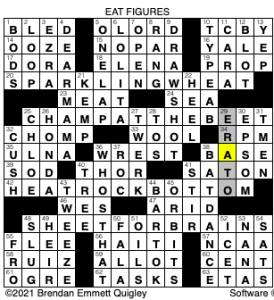 I loved the creativity of this theme, though I struggled (and am not 100% sure of) with SPARKLING WHEAT’s equivalent. However, I think that CHAMP AT THE BEET and SHEET FOR BRAINS make up for my confusion; that’s on me, not on BEQ.

The grid for this puzzle was great, and I thought that the corners provided great support for the rest of the puzzle and for the themers. I hit a really nice flow once I finally got BLED (1a [“God the red out?”]) in the top left.

Here’s my top clues (though this list could conceivably go forever):

That’s my ALLOTment of words for today, and while I’d love to spend more time discussing this fun Thursday puzzle, I’ve got too many TASKS to do! Wishing y’all a speedy end to your week. I’ve put the link to “BATDANCE” below, and definitely recommend it if you need some hyping today.

Just peeped the title. Is “shuffling papers” a phrase I’m unfamiliar with? Just googled it. Looks like it’s a popular ASMR activity. Fun!

THEME: The names of popular newspapers are anagrammed in the second word of a two-word phrase. 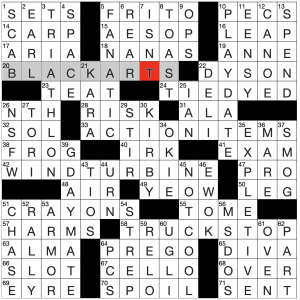 I’m impressed that the word TURBINE can be anagrammed like that.

Solid enough for an unscramble-the-word theme. I solved the “New York” entry before the first one and was quite certain we were unscrambling baseball teams as I saw METS in the word ITEMS. Nope! Newspapers!

These types of themes typically employ circles in their grids. But the directions in that initial long theme-clue are clear enough and I do prefer the online webapp, print version, and Across Lite file in alignment (over one employing circles when the others are not able). 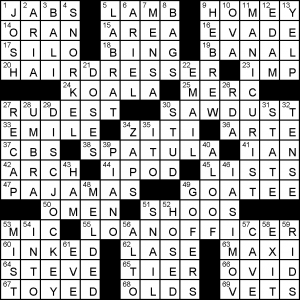 It took me a while to get into Susan Gelfand’s headspace and be able to piece together how her theme works. Maybe it would be easier to understand with a different clue style, but themed answers are job titles given a seemingly (but not actually) synonymous alternative in their clues: HAIRDRESSER/[…locksmith…], DISCJOCKEY/[…chiropracter…], LOANOFFICER/[…librarian…] and MANICURIST/[…file clerk…].