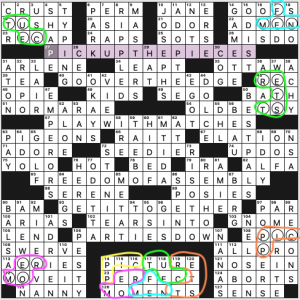 If you’re like me, you’ve spent far more time today on jigsaw puzzles than crosswords, and so you didn’t even glance at the puzzle note telling you how to fill that 7×3 space at the bottom of the grid. You have some pieces, so you fit them together into a rectangular space!

(Now, I hate annotating crossword grids in Preview, so pretend that the colors of the pieces in the grid actually match the colors inside the bottom box.) I eyeballed the “piece” with 5 letters, the only one that’s 3 squares high, and placed that at the right side of the puzzle space (on scratch paper!). Combine your jigsaw puzzle skills with your crosswordy skills for piecing together letters in plausible order, and you get “what jigsaw puzzles provide”: PICTURE-PERFECT MOMENTS. Cute! There are also theme entries that pertain to the process of putting a puzzle together—familiar phrases clued as if they’re about jigsaws.

Cute theme, especially for the jigsaw puzzlers among us.

What else is in this puzzle? I don’t remember, because I was going to blog the puzzle before going to pick up dinner, and then it turns out the food was ready in 20 minutes rather than an hour, so now I’m back after a leisurely dinner break (Neapolitan pizza).

Evan Birnholz’s Washington Post crossword, “In a Class of Their Own” – Jim Q’s Write-up

THEME: Famous names are the first word of classes. 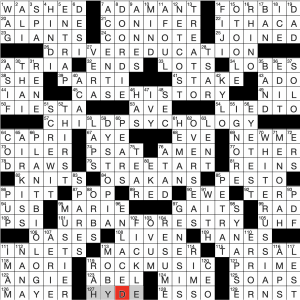 Washington Post, August 8, 2021, Evan Birnholz, “In a Class of Their Own” solution grid

If the WaPo puzzle were an elevator, it just came back to the ground floor, welcoming everybody aboard. Evan’s cycle is spot-on in the sense that newer solvers are always provided an opportunity to get hooked on puzzling without the intimidation of wackier themes… like when the elevator doors open a few weeks from now and David Pumpkins is there.

This one was very breezy. I didn’t time it- had a couple of distractions mid-solve. But I have a feeling I came in under 10 minutes, which is very fast for me on a 21x.

As far as the theme goes, some classes are unfamiliar to me. I took History of ROCK MUSIC in college as an elective, but I’ve never heard of a class called ROCK MUSIC. Same with STREET ART (Picabo STREET is a new name for me as well). And we always called it Driver’s Ed. It sounds odd to me without the possessive. But all tiny nits. The overall picture is solid. Impressive that there are that many names that can be the start of classes.

WHITE RUSSIAN for the win, amiright?

Not much else to say! Enjoy Sunday! 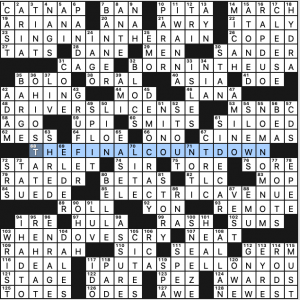 There’s a lot of great music here, and it’s probably impossible not to start singing one in your head during the solve. So I enjoyed that part of it. I also enjoyed trying to match the clue with the song. Mostly they work. And the ones I nitpicked on above work well enough. So overall, high marks from me.

What I didn’t know—being an old person—was the song DRIVER’S LICENSE. Usually I will at least have heard of a pop culture hit, but not this time. It’s the debut single from Olivia Rodrigo and it came out in January of this year. That’s not enough to make it crossword-worthy, but the sheer number of awards that followed is. I’ll let Wikipedia take it from here:

“Drivers License” broke a string of records, including the Spotify record for the most single-day streams for a non-holiday song (achieved on its fourth day of release), the biggest first-week for a song on Spotify and Amazon Music. The song topped the US Billboard Hot 100 and made Rodrigo the youngest artist ever to debut atop the chart. The song spent eight consecutive weeks at number-one, becoming the longest running number-one for a debut single. It has been certified triple platinum by the RIAA. Elsewhere, “Drivers License” reached number one in seven additional countries, as well as spending multiple weeks atop the charts in Australia, Canada, Ireland, New Zealand and the United Kingdom. It also peaked within the top ten in Brazil, France, Germany, Italy, Spain, and various others. The song has been credited with launching Rodrigo’s music career.

Oh, one more thing about the theme. I noticed each clue uses wholly different phrasing. That is, none of them duplicates any of the words in any other clue. Only one clue uses the word “song” for example, or “music.” I don’t know if that was on purpose, but it seems like an elegant touch to me.

Top fill: DEMOCRACY, SIDECAR, NOM NOM NOM, CATNAP (at 1a). Boo on OHIO STATE (just because they’re OHIO STATE). I doubt anyone would ever use the word GRUFFER, but there’s something likable about it.

Clues fall on the straightforward side, making for a quick solve. Between that and the music, this Sunday-sized grid was definitely not a slog. Four stars from me.

Theme: You can put “up to” in front of each themed answer in this puzzle to make a commonly used phrase. 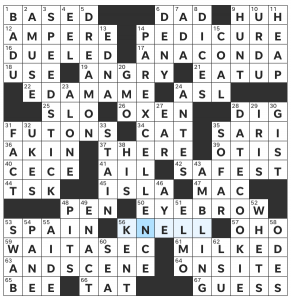 This was definitely a clever theme, especially because aren’t constructors always up to something in their puzzles? It was a nice combo of answers, though I struggled with both PAR EXCELLENCE and DATE COOKIE, though the latter was more because I was unfamiliar so I’m glad to have learned about this treat (I would link a recipe but they all look so good, so do yourself a favor and browse). I feel like I don’t see enough down-clued themes, so that made for a small bonus.

There were a lot of names in this puzzle, with Erykah BADU, EDNA (from Hairspray), ADA Palmer, CECE Peniston, ISLA (of Isla and the Happily Ever After), OTIS Clay, and Autumn KENT. I appreciated that variety of contexts, but I found some of these to be particularly tricky. However, the distribution was such that I could fill most of them on the crosses.

Some of my favorite clues for today include

Fun title. Just seeing it now. I don’t know why I can’t make a habit of consistently reading the title before starting.

THEME: -ING is removed from common phrases, resulting in wackiness. 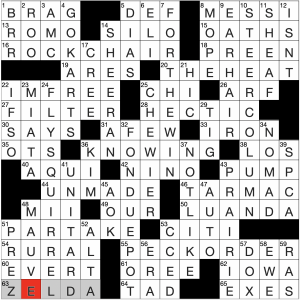 That FLY SQUIRREL is also living in the early 90s. I can’t remember the last time I heard someone use the word “fly” to describe something cool… remember the Fly Girls on In Living Color?

Fun puzzle! Didn’t see that revealer coming! Bizarre word for a revealer, no? I mean it totally works, but typically revealers are colorful phrases. It caught me off-guard.

Two entries stole the spotlight from the theme though: FOR THE WIN and EAR HAIR.

EAR HAIR is so delightfully weird… just something one doesn’t think about ever until all of a sudden you’re thinking about it.

I don’t like the Split Decisions puzzles that show up occasionally in the Times (why can’t they publish a real Rows Garden now and then? anyway) so the title made me roll my eyes. This is not like those. I still wasn’t crazy about it because the theme has nothing to do with the solve, at least not for me. I ended up going back to figure things out after I finished. I only did that so I could write this; I wouldn’t have bothered otherwise.

The revealer tells us what to look for: 66a [Product with lots of shapes…or what each of four black squares effectively is?] is ANIMAL CRACKERS. Each pair of theme answers has an animal name that goes across the square dividing them and each of the four squares has a set of Across and a set of Downs. I’ll present them that way. 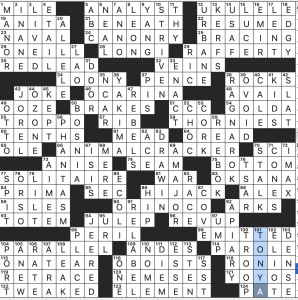 The theme is solid and well-executed; my dislike is a matter of taste, not quality. I needed the asterisks to even find the theme answers; it solved like a large and not particularly difficulty themeless. This is why I don’t usually rate puzzles. I don’t know if I’m rating based on my enjoyment or my assessment of quality. The two do not always go together. It’s like my experience with “A Clockwork Orange.” I knew while I was watching it that the film was incredibly well-made – a film genius at the peak of his powers. I was miserable while I watched it and would have walked out if I hadn’t been with a friend who chose it as his birthday outing. It was Art and I was miserable. This puzzle was not excruciating and for that I’m grateful.

What I didn’t know before I did this puzzle: that UKELELEs are traditionally made of koa wood.