I didn’t understand the theme while I was solving. There are some cross-references that I pretty much ignored and filled in from crossings. Once I completed it and looked, I was amused! I think it’s a nice Monday offering.

The theme answers are in opposing pairs. 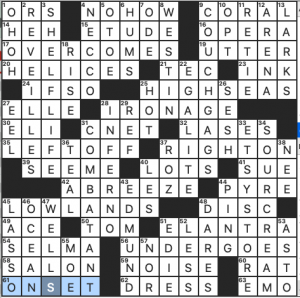 That’s a lot of theme material for a 15×15 grid. There was nothing in the fill that made me stop to be annoyed. All in all, I think this is a solid, enjoyable, accessible Monday.

What I didn’t know before I did this puzzle: that every Simpsons opening has COUCH GAGS. Never watched it. Everything I know about “The Simpsons,” I learned from crossword puzzles (see also “Game of Thrones,” “Mad Men,” “Breaking Bad,” and “The Wire”). 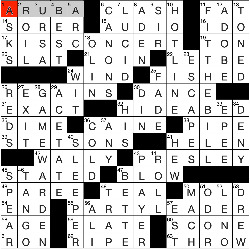 Veteran Fred Piscop is back with an easy-peasy-lemon-squeezy grid. I haven’t come in at sub-2 minutes on the LAT in a while, and I’m solving in a wrist brace (curse you tendinitis!).

I do like that there’s not too much of the grid going to the revealer, which is the final Across answer, 63A [Light bed cover … and a verb that goes with the first parts of this puzzle’s four longest answers], THROW. These four answers are 17A, 55A, 11D, and 28D, and given their pinwheel placement around the grid, I think it would have been kind to star the theme entries as an aid to the solver.

That 1:49 solving time is coming from a grid that’s pretty low on the proper-noun count and has nothing harder than an EPEE or the city of ADEN to deal with. Totally Monday-appropriate fare. 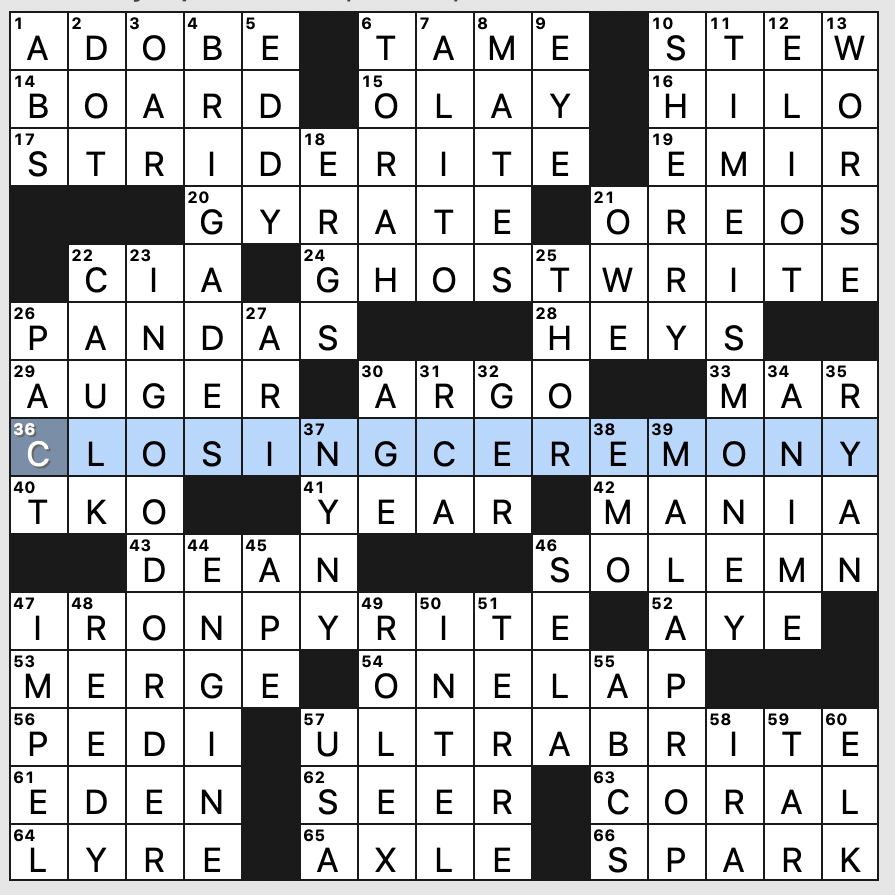 I didn’t see the theme before I finished the grid, so I can’t say that it helped me. But I’m sure it was useful to some newer solvers. It does the job and each of the theme entries is solidly interesting.

Top fill: TIME IS MONEY, IN GOOD ORDER (though I tried IN GOOD SHAPE first), BRIGADES, and MALAPROP (though I encounter “malapropism” more often).

Clues were Monday straight allowing for a quick solve. If I hadn’t hastily put in TERRA instead of TERRE, I would’ve saved myself 15 seconds. 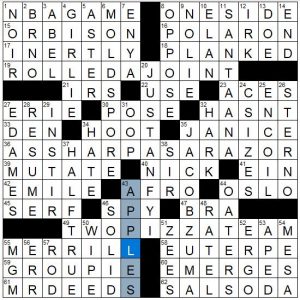 Lots of connectivity in this grid from BEQ, though the tough areas for me were plenty tough even with multiple approaches. The marquee answers were a mixed bag for me: ROLLED A JOINT (9a- [Got into the weeds, so to speak]) is a nice misdirection that wasn’t too telegraphed. I’m not sure I buy AS SHARP AS A RAZOR (36a- [Very intelligent]) as a phrase, but it does Google better than “as sharp as a tack”, so what do I know. 49a- [Work committee designed to be small and short-lived] TWO PIZZA TEAM is utterly new to me, and I see it’s a Jeff Bezos coinage, so whatever. At least it felt plausible for the clue once I filled it in.

JUST AN FYI (20d- [“Keep this in mind”]) is a lovely, colorful clue running down the middle of the puzzle, and I got tripped up with -NOTE for a while that threw me off the scent of TWO PIZZA TEAM, AFRO, and APPLES.

A little rushed this morning, so on to notes: 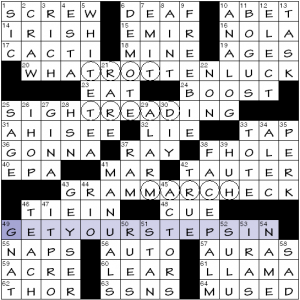 Once again, only a précis from me. To be honest, this is a very straightforward crossword anyway.

And there you have it. Quick tour of the rest:

Title: Upfront Payment
Theme: The part of each theme answer that’s up front is a payment method
Theme answers:

What incredible theme answers today! Wow I loved these. I think a theme answer is excellent when (1) it unquestionably fits with the theme, and (2) I would think it was a great entry in a themeless puzzle. All of three of these hit the mark. 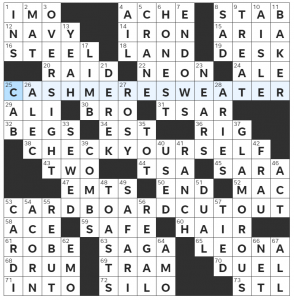 I also have a soft spot for those staircase block arrangements, and there are four of them in this grid. I opened the puzzle and was like “Oh, hello little guys!” This collection of theme answer lengths (15 / 13 / 15) can end up forcing your hand in terms of where to put the black squares (like, there has to be a block on either side of the center row, if you’re doing a symmetrical grid), so there aren’t a ton of longer bonus-y answers. GLAMOROUS (37D: Fergie song that mentions “gold and diamond rings”) is a little more fun than OVERSIGHT (3D: Careless mistake), I think. I put on “Glamorous” while writing this to see if I still remember all of the words, and indeed I do. But still have to look up every Ed Asner every time he appears in a Times puzzle! Brains are weird!!

Like always, this grid had no fill that made me stumble or pause. USA Today puzzles always avoid contrived plurals / nouns and archaic terms or abbreviations. Since they’re so consistent, sometimes we forget to mention how spotless the grids are, so I’ll try and call it out as a reminder in all my write-ups. 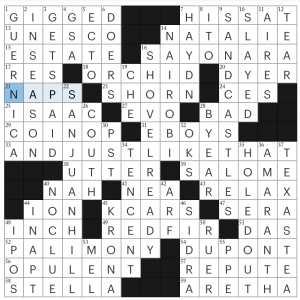 Very smooth puzzle today. I often find myself wading through themelesses––while undeniably enjoyable, challenging themelesses teeter on being too advanced for my solving abilities, or at least for my attention span. I didn’t feel like that with this puzzle: no section felt meaningfully harder than another, and I didn’t feel compelled to put it down. Some really nice long answers, and very few answers that truly gave me pause once I’d work them out.

31a. [Some emo-influenced TikTokers] –– Ah, EBOYS. Felt the good kind of whiplash seeing this in a puzzle; one of several worthy additions to “in-the-language” phrases.

48a. [Part of a foot] –– Good, light misdirect for INCH. I had HEEL in that spot for the longest while until I realized the measurement angle.

52a. [Ex amount?] –– PALIMONY is a new one that I’m not too sure about. I liked the clue and figured it had to be some ALIMONY portmanteau, but the ‘P’ was a bit of a natick for me considering 48d. IPOS wasn’t particularly gettable. A blip in this puzzle, in my opinion.

3d. [Makes bread?] –– I liked this clue for GETS PAID, although I suspect the bread/money cluing angle will rapidly become a standard amongst economic crossword puns. Enjoy it while it still feels fresh.

5d. [Start to morph?] –– The angle for this misdirect was fairly simple to spot––“start” to morph is a slippery way of cluing a prefix. My favorite, exaggerated example of an ECTOMORPH is the truly unsettling creepypasta Slenderman.

9d. [Coastal constructions] –– Evocative clue for SANDCASTLES without being too obvious. Really nice long answer, and especially fun to see 16d. SHOVEL READY so close to it in the grid.

45d. [Capital of Sweden] –– Super tricky clue, especially sans question mark. I sat for several minutes trying to figure out how to condense STOCKHOLM into just five letters until the crossings gave me KRONA, the official currency (and, thus, monetary capital) of Sweden. Infuriating, but my hat goes off to Elizabeth Gorski for this one.

Great grid and great clues to match. A very nice puzzle all around.