Title: “2 State The Obvious”
Prompt: The meta for this puzzle is the missing fifth theme entry, a musician in the Rock & Roll Hall of Fame.
Answer: Eric Clapton 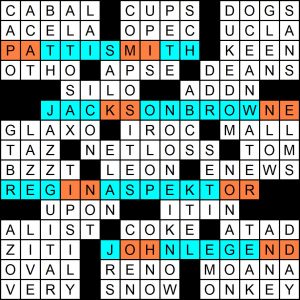 Step 1: From “2 State” we notice that each of the four theme entries contains exactly (that turns out to be important) two state abbreviations, one in the first name and one in the last:

Step 2: There are ten clues that contain U.S. cities, eight of which are located in our eight states hidden in the theme entries:

Step 3: The above accounts for all eight state abbreviations in the four given theme entries, but lo! There are two other clues with U.S. cities in them:

So we need a musician in the Rock and Roll Hall of Fame whose first name contains either RI or LA and whose last name contains the other. 30 seconds of ctrl+F on Wikipedia tells me that our two choices are LARS ULRICH (inducted as Metallica’s drummer) and ERIC CLAPTON (famously and uniquely inducted three times — with Cream, the Yardbirds, and as a solo artist).

So which to choose? Stared and wavered for a bit, and then it hit me: LARS ULRICH contains a stray state abbrev. in his first name (AR), which breaks the pattern of the other four themers, who each have exactly two state abbrevs. So ERIC CLAPTON it must be.

Oh yeah — lovely meta. We get used to Pete’s level of craftsmanship on this but it’s just so impressive how high-level he keeps it. I’m loving year 10 and hopefully you are as well. 4.65 stars. See you in September!