This week we’re told: The answer to this week’s contest crossword is a three-word #1 song of the 2000s. It took me a while to spot the theme: there were no three-word entries in the grid, and the six long-ish 8-letter entries provided no signal. However: two of those entries had unusual clues comprised of three 3-letter words. So I jumped to the clues to see if others shared that characteristic and found nine that did:

(Narrator voice: I over-complicated this one). I didn’t see a pattern in those answers, so I Googled this List of Billboard Hot 100 number-one singles of the 2000s. I found Janet Jackson’s “All For You“, which was the only hit song that seemed to fit the theme. 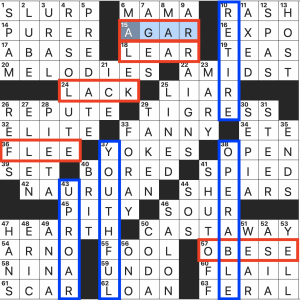 That was a plausible answer, but I didn’t feel a 100% “click” (something Mike Shenk is famous for). Re-scanning my notes: I saw the letters of All For You, out-of-order. I went back to the grid, and (finally) placed the themers in across, then down order:

That locks in our meta answer: ALL FOR YOU, a #1 hit for Janet Jackson. I can’t think of a better song to end with than Mike’s choice, so here it is. It samples the 1980 Euro/Disco song The Glow of Love by Change, which featured Luther Vandross on lead vocals.