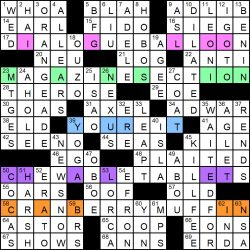 Good day, everyone! Hope you all are doing well and are continuing to stay safe inside and outside.

Speaking of staying inside, today’s crossword puzzle features four 15-letter entries that spell out a type of abode when combining the circled squares inside of each of the entries. Of course, the circles are spread out, hence the title of the grid.

One of my first reactions in solving the grid came when getting a laugh to the clue for ALL EARS (4D: [Apt name for a farmers market that sells only corn?]). Unfortunately, I got my OUZO (18D” [Potent Greek liqueur]) and “orzo” mixed up once again, and that made figuring out THE ROSE longer than expected, even though that shows up now and again in crosswords (28A: [1979 Bette Middler film]). Loved the fill of KILL FEE, though didn’t like thinking about the catch-and-kill strategy from a certain rag that got headlines before the 2016 election after seeing the fill (45D: [Publisher’s payment for a canceled story]).  Wondering if A HOLE has been used by BEQ (or any other constructor) as the insult instead of the partial to a common phrase that is displayed in this grid (24D: [Burn ___ in one’s pocket]).

“Sports will make you smarter” moment of the day: AGE (41A: [Number on a birthday card]) and OLD (57A: [“This ___ House”]) – Though the 2020 Tokyo Olympics have come to a close, marveling at the stories of the athletes who made this a memorable Olympiad will live on, none more so than 46-year-old Uzbekistan gymnast Oksana Chusovitina, who just finished competing in here EIGHTH Olympic games. She has competed internationally for the Soviet Union. She won her first world championship (on floor exercise) in 1991. Her first time at competing at the Olympics was in the 1992 Barcelona games, where she won gold as part of the Unified Team. She has won nine world championship medals on the vault. And she’s still vaulting…and amazing everyone still! 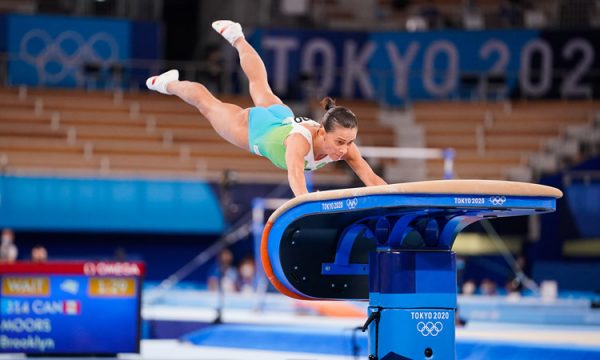 There’s a lot going on with this puzzle, and I’ll admit that I found it pretty confusing at first.

My first hint at the theme was noticing the word CAST going upward in the circled letters at 4d. Since it seemed unlikely there was a word or phrase that started TSAC–, I guessed I was looking for a phrase that had “cast up” or “upcast” or something similar in it. When the rest of that entry turned out to be HECKLIST, I was thoroughly confused. It turned out to actually be TSA CHECKLIST.

The other theme entries were also (somewhat) familiar phrases: 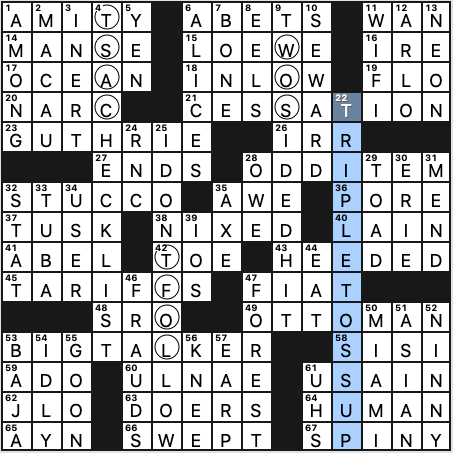 The revealer turned out to be TRIPLE TOSS-UP (22d, [“Wheel of Fortune” feature since 2019, and a hint to the circled letters]), and this finally explained what was going on. Nevermind that I have no idea what a TRIPLE TOSS-UP is with respect to the game show, but in this grid, the circled letters in the three other theme entries spell out synonyms of “toss” going upwards: CAST, LOFT, and SOW.

So that brings us to SOW as a synonym of “toss.” I guess I can see it, but usually one sowing seeds does it more carefully than that. And sowing pretty much refers specifically to seeds; you can’t sow a ball, e.g. Further, I checked a few online thesauri, and none of them lists SOW as a synonym. Why not use LOB instead (unless it’s etymologically related to LOFT which a cursory search didn’t reveal to be the case)?

But during the solve, I gave it the benefit of the doubt and moved on. BIG TALKER was fun and the ARLO / GUTHRIE / ALICE’S Restaurant mini-theme was nice (but also confusing as to whether it was actually part of the real theme).

Finally, I was left with 28a [Curiosity], which seemed like it wanted to be ODDITY, except it was one letter too long. This turned out to be ODD ITEM…and right there is where the puzzle lost me. That’s just not a legit phrase that should appear in a crossword. Change it to ODDITY, add a cheater square where the M is (and on the opposing side of the grid), and see if you can fill it (you can—at least on the right side—with PRIM and LOPE beneath ODDITY).

Clue of note: 60a. [Radii partners]. ULNAE. I missed the hint in the clue and put in ULNAS at first. 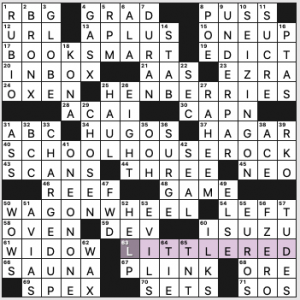 I loved this theme! I absolutely did not see the revealer coming, and when I pieced it together, it was delightful. Four mostly fun terms all begin with words that can follow LITTLE RED, [Phrase that can precede the starts of 17-, 25-, 40- and 50-Across]:

The fill is full of surprises, with less common entries like BRONX, Radio RAHEEM (I still have not seen Do the Right Thing! I know this is a huge gap in my cultural literacy), SEIZING ON, GAS-X, and sci-fi’s HUGOS. There’s also 56d. [Nintendo series with high-speed racers], F-ZERO, for which I needed all the crossings. And the clue for ONE UP left me at a loss: 15a. [Extra life, in video gaming]. Can you tell I’m not much of a gamer?

Once again, not seeing the phenomenal title until now. When will I learn?

THEME: Common phrases reimagined as if they are stolen food/drink. 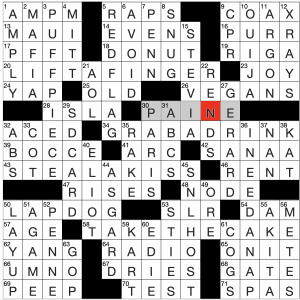 Didn’t seem to notice at the time, but looking it over, two of the base phrases already had to do with food/drink, and two did not (LIFT A FINGER and STEAL A KISS). So a bit of an inconsistency there, but for enjoyment’s sake, it certainly doesn’t matter.

Coulda sworn PAINE was spelled PAYNE and since I don’t much use or see STEVIA, I was able to convince myself that STEVYA was an acceptable spelling. It wasn’t. Easy enough typo to find though.

As today is August 10, it is PUEBLOREVOLTDAY which occurred in 1680. An overview:
“The successful revolt kept the Spanish out of New Mexico for 12 years, and established a different power dynamic upon their return. The Pueblo Revolt holds great historical significance because it helped ensure the survival of Pueblo cultural traditions, lands, languages, religions, and sovereignty.”—Indian Pueblo Cultural Center a brief history webpage. Check out their website and online exhibit to learn more. 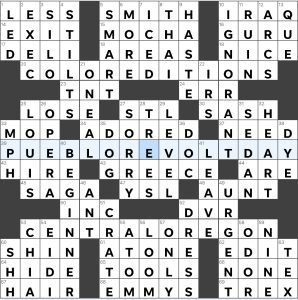 Theme: LORE is in the middle of the themers and itself is considered “inside knowledge”

Today’s title had me ready to find something “inside”, though “knowledge” was making me think that it would be a portion of that word as the commonality. However, the title is meant to be taken as a phrase “inside knowledge”, a clever subtle misdirect given how often titles describe theme outright. I realized it was “LORE” after first having found “ORE” contained within each of them but that didn’t get me to the theme phrase and then I saw “LORE”. For me, though, it’s not as strong of a connection but that is likely because I consider it to be more “folklore” and story-based in my mind instead of defining it as “inside knowledge”. Also, Lore is an excellent podcast, though I like the TV show less after the first season. Although I was cruising through the puzzle initally, I just waylaid by the themer clues. “COLOR” filled right in but I was going for “colorized” or “colored” something and needed crossings for COLOREDITIONS which I still want to write as “colored editions” but maybe the other is a well-known phrase to other solvers. PUEBLOREVOLTDAY is new to me and I will certainly be reading up on it further and more, especially with what looks to be a great website for the Indian Pueblo Cultural Center. I’ll freely admit that I automatically thought “badger state” and I stuck on trying to fill Wisconsin related answers so thus again needed crossings for CENTRALOREGON. When it filled it, I re-read the clue and still wouldn’t have gotten it correct anyway even if I read it right the first time. Since the puzzle was filling in quickly for me, I skipped to the next when I hit any snags, hoping for a new personal record but alas it was not to be with today’s puzzle.

Stumpers: TNT (fave clue last week but stumped me today—go figure!), GURU, ARCS, and AUNT (didn’t learn this saying growing up just that it was “order of operations”)

Starting off, the fill was smooth and like I said I was cruising through the solve. Tripped up on the themers but kept going yet found more and more snags. Doing crosswords has taught me just how much I don’t know or connections that I don’t have personally but clearly other do or perhaps more strong connections between things in some cases. That alone always impresses me, especially reading crossword Twitter and seeing other’s times.

Also, just want to say this was an excellent and enjoyable puzzle for me, even with being a newer solver. When I saw today’s was by none-other than editor Erik Agard, I worried if it’d be too hard for me or if I’d even figure out the theme. While a more challenging puzzle for sure, I made it through and had a great time, which isn’t always the case with every crossword I attempt. Since I’ve made USA Today lately as my main solve, I’ve finished everything even if on occasion I have to look something up when even crossings don’t help me. It’s a good level for and I enjoy them greatly. So kudos as well, Erik, as an editor too! 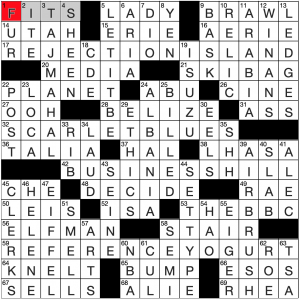 What is the theme of this? I think these theme answers all have to do with phrases that include the word letter:

So I don’t think I understand all of the references, but here is what I THINK is going on: for 32-Across, you have varsity blues, varsity letter, and scarlet letter are all phrases that if you use the remaining combo that I didn’t list would yield scarlet blues. Does that make sense? Good; now someone explain 17- and 42- Across to me! I think this is not as complicated as I am making it, but perhaps it’s just because I don’t know all the refs. 59-Across is reference letter, Greek letter and Greek yogurt mashed up. I will try to check the comments, assuming I didn’t post this too late! 4.4 stars today.

Some of the interesting/obscure stuff: 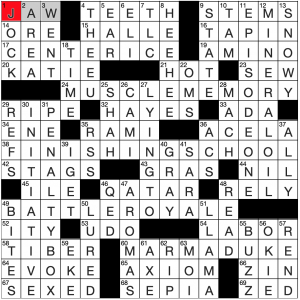 Another new byline to add to the database! Very nice puzzle for a debut, if this in fact is one. The revealer at 38-Across explains what is going on:

Nicely done! We have all the themers ending in colleges and universities. It actually took me a second to see it, which causes a nice “a-ha!” moment while solving. You are allowed to make more puzzles! 4.5 stars for this one.