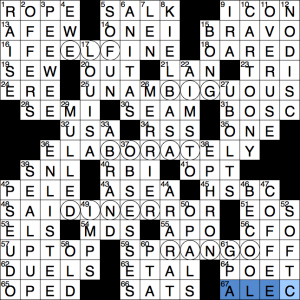 hello and welcome to episode #688 of matt gaffney’s weekly crossword contest, “Heart of the Matter”. the instructions for this week 1 puzzle… well, look, i tried it without the instructions and got nowhere, so i looked at the instructions, and you know what? i still don’t know, which has certainly never happened to me on a week 1, but considering my success rate recently, perhaps it’s only to be expected that i would fall on my face on a week 1. but the instructions tell us that the answer is a cable TV channel. what are the theme answers?

so all of these answers are of odd length and have, in their exact centers, titles of films from the parenthetical years: ELF, BIG, BORAT, DINER, and RANGO. that much was obvious from the start, even before looking at the instructions.

the next step is… well, that’s where i’m stuck. usually there’s no next step in a week 1, or if there is, it’s something obvious like just taking the first letters in order. the first letters of the movies spell out EBBDR, which isn’t a cable channel. sorting them by year gives DBEBR, which still isn’t a cable channel. taking the middle letters instead (which i like less, since it doesn’t require noticing the films at all) gives LIRNN, or sorted by year, NILRR. still not cable channels.

it seems less likely that we’d do anything with the leftover bits once the movies are removed (since that provides an extra constraint on the constructor), but those are IFE/INE, UNAM/UOUS, ELA/ELY, SAI/ROR, and SP/FF. it’s mildly curious to me that the first three pairs start with the same letter on both sides, but that doesn’t appear to be significant.

in a week 2 or 3 puzzle, there will often be an extra entry in the grid that pairs up with each of the theme answers. this is only week 1, so i’m less inclined to look for that sort of thing off the bat, but having exhausted the obvious options with nothing to show for it, we might as well look at everything. the grid is only 74 words, pretty low for five theme answers, suggesting to me that there probably aren’t five more hidden themers. and i don’t see any entries that have, e.g. all of the letters of ELF plus one more, or ELF hidden in the clue, or that sort of thing. there is {“Outstanding!”} BRAVO in the grid, which is itself a cable tv channel, but i don’t see any particular reason why this should be the answer.

what about the stars of these movies? ELF is a will ferrell movie, BIG stars tom hanks, BORAT is sacha baron cohen, DINER… i don’t know. it’s a barry levinson movie, but it’s got an ensemble cast and i don’t know if there’s one particular lead. maybe steve gutenberg? the very fact that it’s not UNAMBIGUOUS suggests that this isn’t the right approach. but for the sake of completeness, RANGO is an animated film with johnny depp voicing the title character.

casting about for other approaches, let’s take a look at a list of cable channels. it’d be great, i guess, if something jumped out as being descriptive of the kind of wordplay used in the grid. there are a lot of movie channels. could it be something like AMC? these are, in fact, all american movies … ish? (BORAT might be a i am not sure i would call RANGO a classic, though. the other four have stronger claims to the label.

okay, how about comedy central? that’s certainly one of the better known cable channels, and it does accurately describe the theme, since those five movies are all comedies, more or less. (again, RANGO is the somewhat questionable one here, as i would consider it first and foremost an animated movie, and maybe second a western. but comedy is one of its genres, certainly; imdb lists it as all of animation, adventure, comedy, family, and western.)

i would love for the click to be stronger here, but i think that is very likely to be the answer, so i’m going to submit it. if it’s right, i wish the instructions had been worded something like “the answer is the name of a cable tv channel that describes this puzzle’s theme” instead of just “a cable tv channel”, because then i’d be quite sure i’d solved the puzzle.