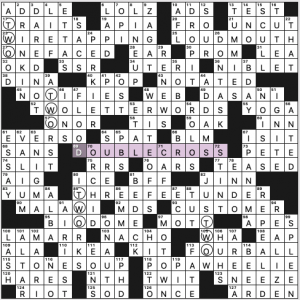 The theme revealer for this “Think Twice” puzzle is 69a. [Betray … or a hint to four answers in this puzzle], DOUBLE-CROSS. The other themers have TWO in a Down answer crossing a phrase with ONE, TWO, THREE, or FOUR in it, and you need to multiply those numbers to get a legit phrase:

You might think, “Well, this theme really needs to have five or six of these, because four feels a little light.” But ONE, THREE, and FOUR all contain a letter from TWO, so FIVE, SIX, and SEVEN won’t work. You could do EIGHT and TEN for phrases with SIXTEEN and TWENTY in them, but I do like the elegance of the 1-2-3-4 sequence. I also love the idiomatic nature of the theme phrases, and that the contemporary “just … wow” is included.

Overall, the fill is super-smooth and modern. Highlights in my book: LOLZ, LOUDMOUTH, NIBLET (paging Sam Ezersky: add this to the Spelling Bee word list!), K-POP, STONE SOUP, POP A WHEELIE (the verb pop is distinct from popular in K-pop, I’m OK with the overlap here), SNEEZE, DRINK IN the beauty, WRITE-OFFS, “DON’T ASK,” and TUMMIES. Lots of flavor, lots of Aimee and Ella’s voices.

Had a good feeling I had the theme figured out by the title before jumping into this one. Had another good feeling that there would be a Birnholzian layer to put a cherry on top. Right on both accounts!

THEME: Songs can be found backwards in common phrases. 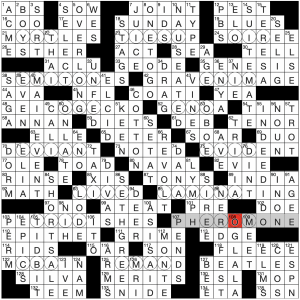 Those letters in that quasi-revealer spell out PAUL IS DEAD, of course. Wait… what? They don’t? They spell out TURN ME ON, DEAD MAN. Well, that’s the first I’m hearing that! Looks like I’m not the only one who has been misled.

I mean, wow. It is very easy (for me) to hear that phrase repeated over and over again in that song:

Anyway, the puzzle. There’s like a bajillion themers there! Or sixteen. Something like that. And it’s quite the feat to pull off. I’m not sure if anyone other than Brendan Emmett Quigley would know all of these songs. Actually, I wouldn’t put it past pannonica, one of the bloggers for this site. She is a human music encyclopedia. I betcha she knows all of ’em. I won’t divulge just how many titles I was unfamiliar with, but suffice it to say it was more than a few. Some of the bands were foreign to me too for that matter. I’m no music buff… not even close. And I recognize the irony there as I am leaving 30 minutes from the time I am writing this in order to play a regular four-hour piano gig.

Finding words backwards- especially longer ones- in common phrases in order to create a grid is no easy task though. Especially with the added constraint of needing the first letters to spell out that infamous backwards message. GRAVEN IMAGE was new for me, but I think that’s about it. Oh, I don’t know how to spell PHEROMONE. Thought that first O was an E and accepted (E)GLALA as the tribe name. Found that typo after a relatively quick scan though.

Some tougher-than-usual fill was a likely result of so many themers. But a decent payoff. I won’t be forgetting this puzzle anytime soon, and I’m glad the record is set straight (pun intended) with those of us who falsely thought the hidden phrase used Paul McCartney’s name. 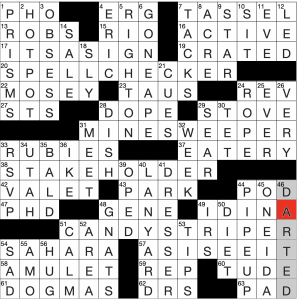 As far as phrases-are-now-jobs puzzles go, this one is spot on. The jobs are niche indeed, and hilarious visuals are the result. CANDY STRIPER is my fave. On another note, anyone else notice just how many phrasees-are-now-jobs puzzzle themes there are? Doesn’t bother me… just seems odd.

Loved the fun fact for UTAH: [State whose official snack is Jell-O].

Theme: Every answer splits up the letters in “DIRT” between the beginning and end of the phrase.

It’s interesting that “DIRT” is broken up differently in each theme answer. DISTRICT COURT was my favorite of the themed answers. I would like to see DEEP V-NECK T-SHIRT return in more puzzles because I think that there are a lot of opportunities for creative cluing. As for DIRE PREDICAMENT, I usually hear “dire circumstances” as the most common equivalent to this, but I know that this fits the theme.

The four 8-letter clues, PRICE WAR, IRRITANT, DERISIVE, and IRON GRIP were all good ones. Save for IRRITANT and half of IRON GRIP, I had to catch a few of these after getting some of the crosses first. Plus, with IRRITANT clued as 10d [“Inflammation-causing substance such as pollen”], it wasn’t too much of a repeat with 6d [“Something you might scratch]’s ITCH.

A slower Sunday for me, with a few hiccups, but it’s always good to keep my EGO in check. I definitely had a few AAHS when I finally realized what 52d [“Optical phenomenon in the desert] was (I really wanted MIRAGE to be “oasis” for some reason, even though it didn’t fit) and when I finished 34a [“Stage remarks meant for audiences] to get ASIDES. Overall, it was solid solve and start to my Sunday!

Rock/pop band names are found hidden inside familiar phrases. In a sense, each phrase BREAKS UP THE BAND (120a, [Upsets many music fans, and a hint to the starred answers’ indicated letters]) by splitting the band name apart as parts of separate words. Ironically, the one person (maybe unfairly) blamed for one of the biggest band breakups in music history—and regular crossword entry—Yoko ONO, does not appear in this grid (though RINGO does). 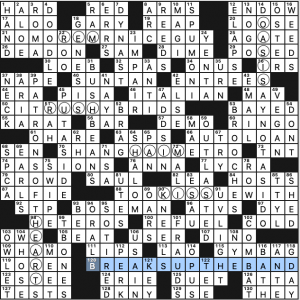 Works well enough, yeah? I’ll admit that I tend to look at it the other way; the puzzle doesn’t “break up the band,” but actually puts it together by removing spaces and identifying it with circled letters. But I take the puzzle’s meaning, that is, when not in a puzzle, these phrases “break up” a band name by adding spaces. 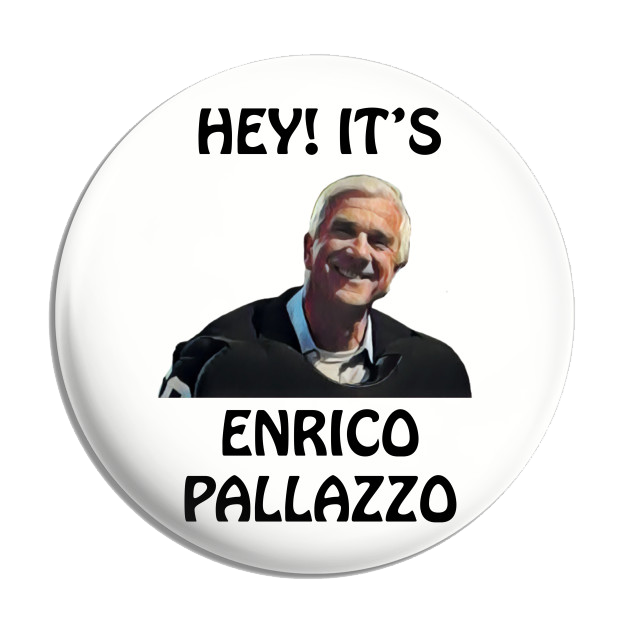 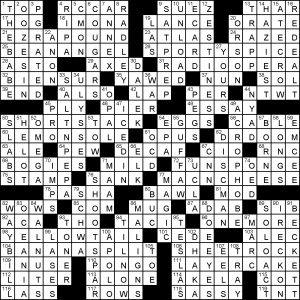 Today’s LA Times Sunday by Dylan Schiff has a rather vague title: “Just Desserts”. It turns out that’s because it has a second revealing piece at the end: LAYERCAKES. I think of cakes more as something served as a snack with tea than pudding, but perhaps it’s different over there?

An unusual feature of the puzzle is that some times the cakes are in front sometimes at the end. What is consistent is the pairs are of even length and lie atop one another. The top pairs are ezraPOUND and beanANGEL; sportySPICE and radioOPERA; and SHORTstack and LEMONsole. I’ve never heard of an opera cake, but googling it suggests it’s rather decadent. The bottom pairs are modern funSPONGE and macnCHEESE; YELLOWtail and BANANAsplit; and then SHEETrock and LAYERcake itself. I’ve also never heard of a yellow cake; it seems to be a regional term for a sponge cake, but I was imagining something from a urinal…