Hello everyone! For those who don’t know me from the Wednesday/Thursday USA Today write-ups, I’m Sophia and I’ll be taking over blogging the Monday NYT through the end of 2021. Writing puzzles that are accessible to newer solvers yet remain interesting to veterans is hard, so I’m excited to spend the next few months talking through some great ones together with y’all. 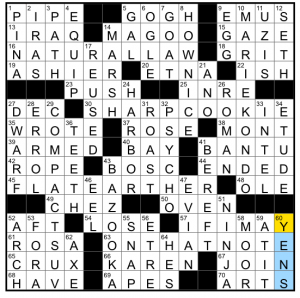 The theme revealer today is ON THAT NOTE (63a, [Speaking of which … or where the starts of 16-, 30- and 45-Across can be found?]. Each of the other theme answers starts with a symbol that can be used alongside a music note to modify its pitch.

HOW NICE to have a straightforward Monday theme that was understandable even to those of us that know very little about the technical side of music! I loved the clue on FLAT EARTHER which made an already-interesting entry top-notch. Is SHARP COOKIE a very common phrase? I personally thought it was going to be “smart cookie”, which resulted in a solid 5 seconds of me staring at the grid wondering if “marsm” was a word.

The grid is a pangram, which is not something I usually care very much about because I oftentimes feel like trying to squish that last rare letter into the grid can cause big trade-offs in fill quality. Today I didn’t even notice it until I looked over the grid and saw all the unusual letters. Big props to Freddie for making a pangram that didn’t feel forced and kept smooth, Monday-level fill!

Speaking of that fill, my favorite thing in the entire puzzle was the inclusion of MARIE KONDO. I’m starting the process of moving, and I think about her “does it spark joy?” advice every time I decide to keep something I arguably should get rid of (sorry Marie!) Her symmetric counterpart, 29d [Kia Sportage or Ford Escape], gave me one of my only write-overs in the entire puzzle – “compact car” for COMPACT SUV. COMPACT SUV sounds a little like an oxymoron to me, don’t you think? 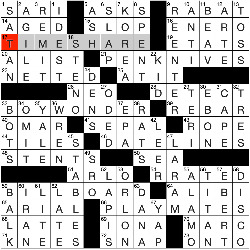 Nice easy Monday to start the week — as with last week, I came in sub-2, with no sticky spots to get in the way.

Plenty of thematic material in this grid, with five themers totaling 45 letters plus the revealer at 66A [Sandbox sharers … and a hint to the starts of the answers to the starred clues], which is PLAYMATES. What that means is that PLAY can be added to the first word of each theme phrase (or first half of a compound word) to form a new word or phrase:

Nice smooth solve without a lot of proper names to trip you up, and what more can you ask for on a Monday?

Theme: OUTER EDGES (63a, [Peripheries, and what 17-, 23- and 53-Across all contain]). The other theme answers have the letters EDGE as bookends. 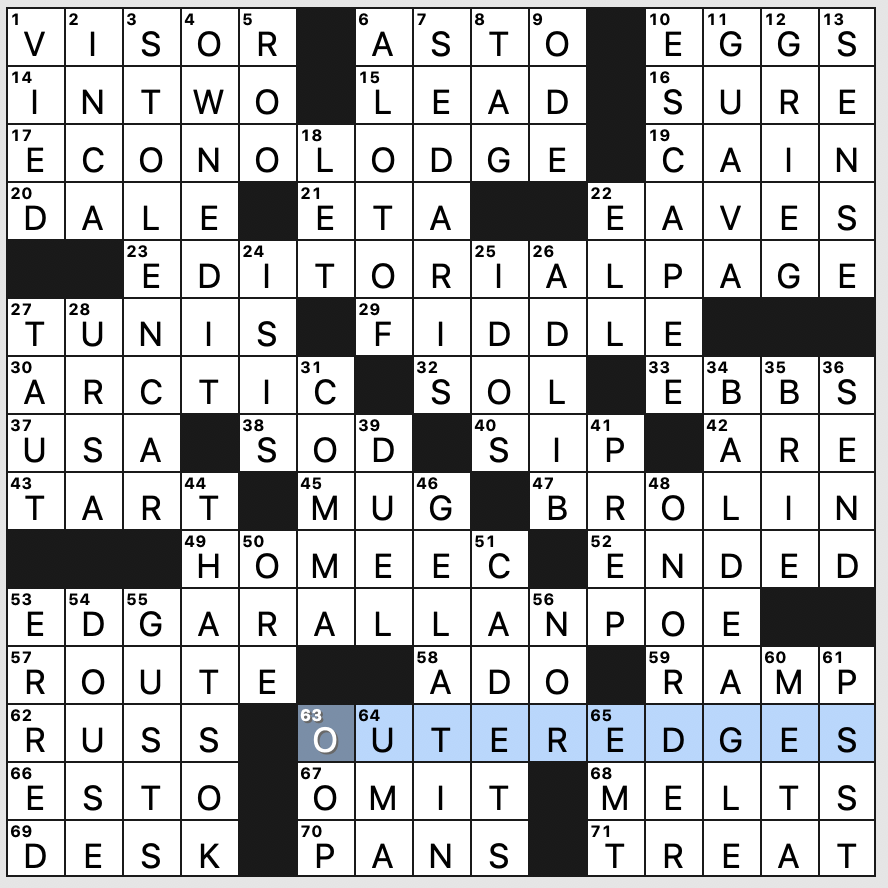 A solid execution of this type of theme. I can’t say I got a lot out of it, but no doubt newer solvers will have found it helpful. I do appreciate the constructor’s care in choosing entries that represent all three configurations of the letters and that there are no ambiguities in the entries.

In the fill, I like STOLEN CAR with its clever clue [Malibu, when it’s hot?], BALD EAGLE, David SEDARIS, and OWNED IT, as well as “THAT’S OK.”

The rest of the fill is remarkably clean with little in the way of crosswordese, another testament to the constructors care.

Clues are Monday straight (other than the one cited above), so I will leave it there. 3.5 stars. 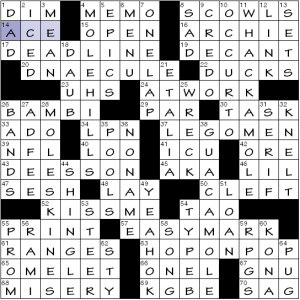 Points for creativity on this theme, but I’m not convinced that it fully succeeds.

In case you aren’t familiar with the thing, it’s a horizontal playing area with a number of holes, out of which ‘moles’ randomly pop up and are meant to be struck with a rubberized (possibly plastic?) mallet. Aside from the obvious and inherent cruelty (which I don’t feel should be encouraged in kids), I think the critters are more akin to groundhogs/prairie dogs.

So it seems to me that to parallel the ‘game’ only one of the vertically oriented MOLEs in the grid should be above the intersecting across word, i.e. above ground. The others should be below or, alternatively, at progressively lower heights representing the ‘whacking’ process. 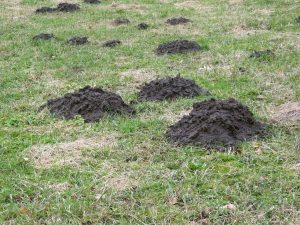 Next, two of the three MOLEs directly refer to talpids: a MOLEHILL is literally the hill of excavated dirt and MOLESKINE—named after a passage in Bruce Chatwin’s Songlines (1987)—is the French word for moleskin, the densely woven cotton fabric that resembles the short, thick pelage of moles (important for smoothly moving both forward and backward in their tunnels). GUACAMOLE is the odd one out here. (Mexican Spanish, from Nahuatl āhuacamōlli, from āhuacatl avocado + mōlli sauce.)

Moving on to the ballast: 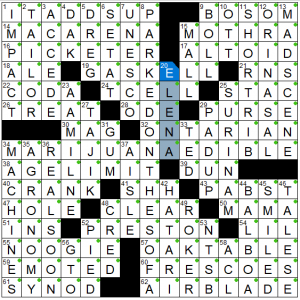 Lots of room for good stuff in the corners from BEQ today, and I found this one quicker than the last few Mondays.

My only trouble was the proper nouns crossing at 19a [“Cranford” author Elizabeth] and 20d [____ Cañero-Reed (“Diary of a Future President” protagonist)]. Elizabeth GASKELL‘s Cranford has been adapted by the BBC, and perhaps it rattled around my brain in that way. “Diary of a Future President” is a Disney-channel show starring ELENA Cañero-Reed, so entirely new to me today. My favorite clue-answer pairing wasn’t far away: ONTARIAN for 32a [Londoner, e.g].

Good morning, solvers! (#normalize calling 1:30pm “morning”) I am familiar with a lot of the names on the USA Today’s roster, but I didn’t recognize either of these two authors. I’m curious if this is a USA Today debut for either of them.

Theme: The last word of each theme answer is a synonym for “TALE”

It’s a nice touch that all the themies use different meanings of the final word– like, the “account” in CHARGE ACCOUNT is not referring to a tale. (And ditto with the other usages of STORY, LEGEND, and WHOPPER). I think the last two themies are delightful, and the first two are a little bleh. I am not familiar with the term CHARGE ACCOUNT and kept trying to make “layaway” fit there. Actually, this is an interesting puzzle question: I would prefer a sparkly, lively answer that doesn’t use different meanings of the final word. (Like A CINDERELLA STORY, for instance) but I think I’m in the minority there. Curious what others think! 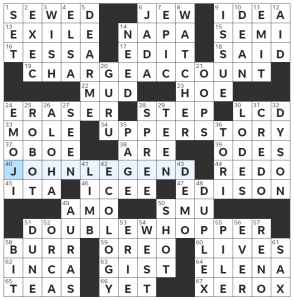 I am always grateful to be reminded of NBC’s “Jesus Christ Superstar” performance because then I can listen to Sara Bareilles sing “Everything’s Alright.” John Legend is a very very good singer as well, but unfortunately the best version of “Gethsemane” is Steve Balsamo’s practically inhuman rendition. Unbeatable. Tearing up listening to it right now.

It’s lovely how reliably clean the fill in USA Today puzzles. I think the only thing that made me tilt my head was SMU (50A: Dallas school) but it’s crossed super fairly. (And obviously, SMU is a staple of other publications’ puzzles!) I loved how DYSON (32A) got a little shout out for their hair-styling products. The Internet knows that I have curly hair and so I get targeted ads for their straighteners all the freaking time. HA! As if I would ever straighten my hair.