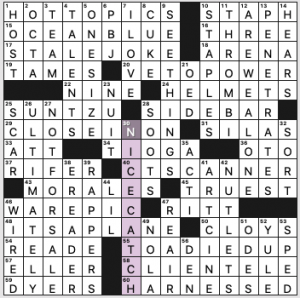 By the way, if you’re cranky that the NYT stopped providing .puz files, do look into the Firefox/Chrome extension called Crossword Scraper. It’s not perfect and it’s not guaranteed to always work (the caveats are explained in that link), but it works now and I appreciate that.

Fave fill: “NICE CATCH!” I use this far more in editorial circles than as a sports reference, mind you. “IT’S A PLANE!” is fun, particularly since my BFF was in Metropolis, Illinois today—home of a Superman statue. An article SIDEBAR, NOT FOR SALE, and SEE THINGS are also good.

Not keen on 55a. [Kowtowed (to)], TOADIED UP. The entry feels incomplete—TOADIED UP TO, sure, but hiding the “to” in the clue doesn’t work for me.

We’re informed by the byline that Paul had help in constructing this puzzle from Ava Coulter, age 2, who is, I presume, his daughter.

The theme answers are familiar phrases that hide some “baby talk.” I expect by age 2, Ava can speak more than just the circled letters in the theme answers, but given crossword publication timelines, maybe she was still a one-year-old when she constructed this. 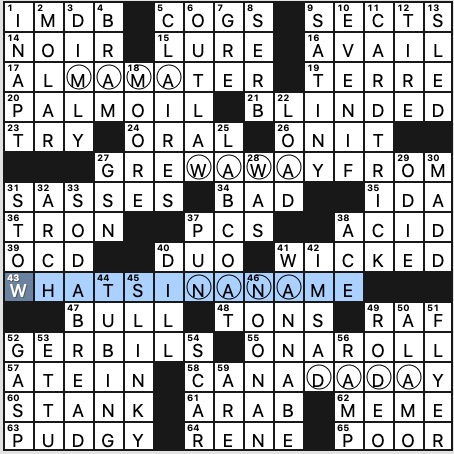 Cute, yeah? Not rocket science, but pleasant and fun.

Top fill: CARD TRICK, SODA BREAD, LAB COAT, WANNABE, PALM OIL, ON A ROLL, GERBILS, PUDGY, and SLINKY. CLAIRE’S, the jewelry store, is nice as well, though I screwed it up and went with CLAIROL to begin with.

Whoa. Today I Learned: The song below was written and performed originally by Bruce Springsteen for his debut album. It was commercially unsuccessful and didn’t chart. However, the Manfred Mann cover version reached #1 on the Billboard Hot 100—maybe because they turned the line “cut loose like a deuce” into “wrapped up like a douche.” (That was a joke.) 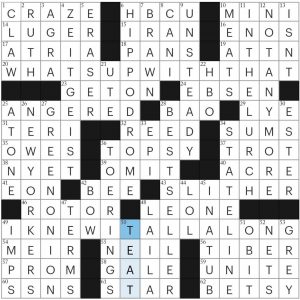 Robyn puzzle!!! Hooray!!!!! I haven’t reviewed one of her New Yorker puzzles before. This was a pretty layout with colonnades (Long down answers that are side-by-side) in two of the corners, and two spanners. When I think of a puzzle that is Weintraub-esque (Weintraub-ian?), that means it has conversational entries, cute question mark clues, and entries that create nice images. Let’s take a look at some of these:

Other things to mention: I love that this puzzle had the term NEW YORKERS in it, although I felt the clue (26D: Constituents of Chuck Schumer and Kirsten Gillibrand) was not as exciting as it could have been. Also, this puzzle had TEAT at 50D (Suckling site). I run a bot that checks whether the New York Times puzzle has that entry, so it felt like something I should call out.

I’ll close by saying that I am about to go on vacation for two and half weeks, so some lovely Fiend-ers are stepping in for me. I’ll see you on September 10!

Theme: Every themed answer forms a “BRIE” sandwich, with the letters of the word split up between the beginning and end of the answers. 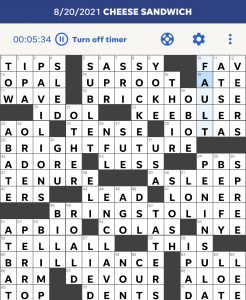 This theme was one of the reasons that I love crossword puzzles. It’s so fun that this reverses a cheese sandwich where BRIE is the bread. Plus, this has some really sunny and optimistic theme answers that make for a fun time.

I liked the shape of this puzzle and enjoyed the variety of answer lengths. The bottom left had a lot of LL combos between BRILLIANCE and 56a [“Memoir with juicy details”]’s TELL ALL, which I just thought was worth point out. PULL (63a [“Word near a door handle, maybe”]) perhaps felt left out.

As I’ve said, this was a bright puzzle with a cheesy (get it?) but fun theme. 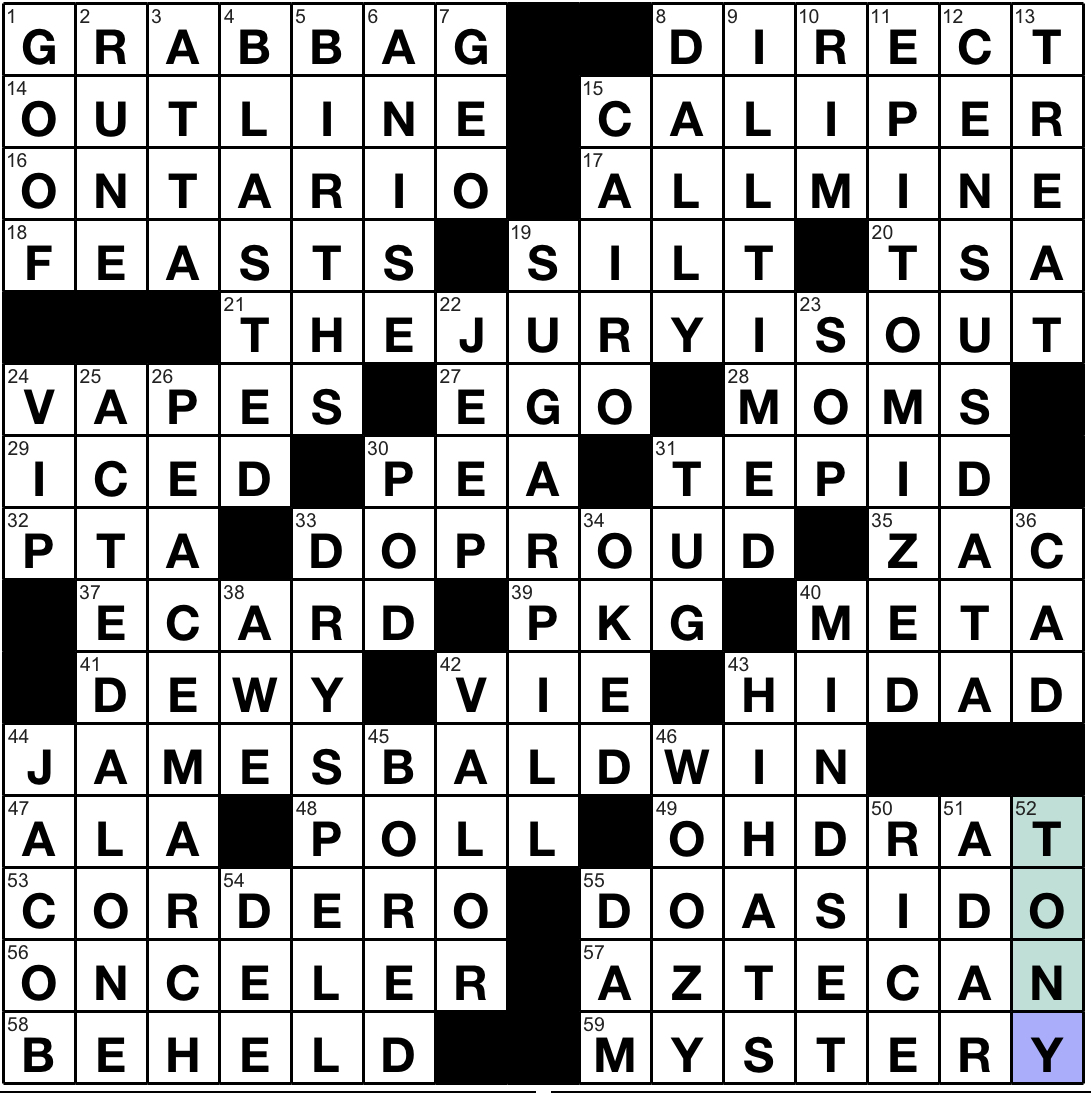 Now I have had Gilbert & Sullivan songs stuck in my head thanks to 11-Down [Was the very model of a modern Major-General, say], but I’m not going to hold that against the puzzle, since that’s a great clue for EPITOMIZED.

Really all of the 10s in the grid had fantastic clues. My favorite was probably PEACE MARCH [King’s speech setting], but ACTED ALONE [Was helpless?], and CENSUS DATA [It started including stats on same-sex couples in the US in 1990 with an “unmarried partner” option] are also great.

I also really enjoyed the symmetry of 33 and 9 Down – as all DRY SPELLs feel ILL-TIMED.

The bottom left side of the grid fell a lot faster for me than the rest – but I think a lot of that had to do with my familiarity with the work of Nick CORDERO and JAMES BALDWIN, because there were tricky clues throughout the grid. I loved the mix here of factual trivia-style answers and spoken phrases. Really kept me on my toes throughout the puzzle.

This grid is really a thing of beauty. The more I’ve studied it to talk about different answers, the more impressed I am. Every single area of the puzzle has juicy answers and there’s really nothing obscure, it’s just the clues here making the puzzle challenging. Just stunning all around.

My one nit-picky thing here – I did question the answer AZTECAN a bit. In my mind, the adjective here as Aztec, with AZTECAN used mainly for languages, but perhaps a linguist in the crowd could correct me here.

In honor of JAMES BALDWIN‘s appearance in the grid – here’s a trailer from Raoul Peck’s excellent documentary I Am Not Your Negro – if you haven’t seen it, move it to the top of your list