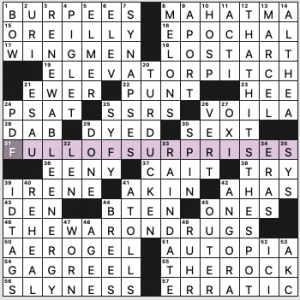 Fun puzzle, though a bit easier than I expect for a Saturday NYT. Lots of fresh fill: the BURPEES that CrossFit aficionados like Stella Zawistowski can do, O’REILLY Auto where my friend Laura works, WINGMEN (gendered but I think women can be good wingmen too), LOST ART, ELEVATOR PITCH, FULL OF SURPRISES, the successful entity called THE WAR ON DRUGS (it didn’t combat drug use but it sure as hell promoted mass incarceration of Black and brown people, which is basically what Nixon was going for), THE ROCK, RENEWABLE ENERGY, PIGLET (but no Milne clue, alas!), TURDUCKEN (any food that starts with turd seems like a bad idea), and “THAT HITS THE SPOT.” This puzzle did hit the spot pretty well.

Four stars from me, even with the clunky short fill. The overall vibe with the longer fill and cluing worked for me.

THEME: Things that have a point are at the start of common phrases. 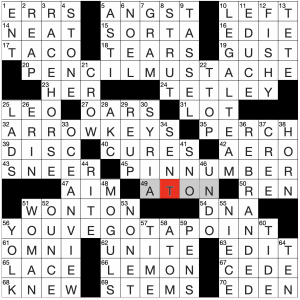 I feel like Universal has been doing a helluva job with clean grids and accessible themes while still keeping the puzzle enjoyable for solvers at all levels. I’ve been doing a lot of side-by-side solving with newer solvers in the last week, and they consistently enjoy the Universal over many others. This one is no exception. Very light on crosswordese and clean as a whistle.

My only nit is that PIN, as clued, does not refer to anything pointy. It refers to a number. The first word in the other themers by comparison are still referring to that which makes them pointy. 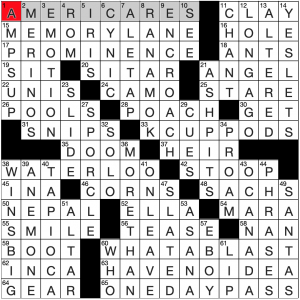 It has been a while since I have done a C.C. Burnikel puzzle, so it was quite a delight to see the byline in this Saturday’s puzzle! This was a bit of a challenge as I learned a new term or two, but this grid is full of lively entries that her puzzles are always good for. A total pleasure to solve! 4.7 stars from me. (Keeping it short since Lollapuzzoola is coming up quickly!)

I will stop there! See many of you later this afternoon! 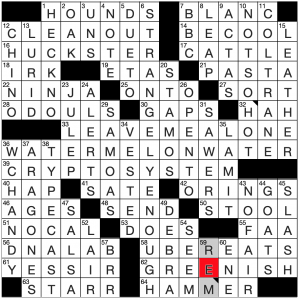 Got through most of this rather quickly, but the NE corner did me in on this one. I think I had the other 3/4 of this done in about 8 or 9 minutes, but I was lost on a couple of these clues. I do have two minor errors in the grid. I had NOT SO BAD at 10-Down instead of NOT SO HOT. And 31A [Cord cutters] totally messed me up. I had SAVERS in there, but they are referencing actual cords of wood with the answer SAWERS! Nicely done, Stan! As mentioned in my LAT write-up, I will keep this short because Lollapuzzoola is coming up quickly! See you all there later! 4.6 stars for this puzzle.