Theme: Each theme answer is the catchphrase of a famous television show. 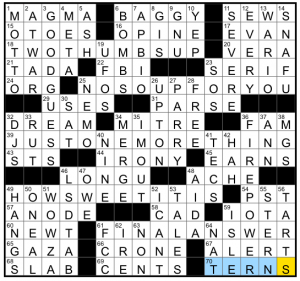 I spent a bit of time after solving this puzzle trying to figure out if there was another layer to this theme – did the TWO and the ONE (and the, uh, FOR…) add up to some FINAL ANSWER or something? But no, it’s just a set of symmetric catchphrases. I wish there had been some connecting thread, because otherwise, why these shows/catchphrases out of the thousands that have aired over the years? Just because they fit symmetrically? As a solver, the solution didn’t quite feel satisfying to me.

These catchphrases skewed quite old in terms of the ages of the shows – of the five, only “Millionaire” aired after the year 2000 (“Siskel & Ebert…” changed its name after Gene Siskel died in 1999). I like to think of myself as somewhat well-versed in pop culture history (I even took a TV history course in college), but the most I could tell you about some of these shows would be that… they existed? And that’s not to say that they aren’t good shows – it just means to me, as a 23 year old woman in 2021, they aren’t a part of my cultural conversation.

It’s always tricky to build an “easy” puzzle around specific knowledge, because every person’s idea of common knowledge is different. If you watched and loved all of these shows and were able to crush this puzzle because of it, that’s great! But for a lot of folks out there, this puzzle is nothing more than random phrases, which makes it much harder to solve. Thus, if you’re planning on making an easy puzzle around pop-culture trivia and having it appeal to a wide audience, it’s a good idea to include references and representation from different backgrounds and time periods. I personally think this puzzle could have done a better job of that.

That all being said! This puzzle had some strong highlights in the fill: GOOD GUESS, WOWZA, and WARIO were all fun. FCC isn’t a great answer but I enjoyed that it felt TV-theme adjacent today. I liked the casualness of I’M OUT and the interesting (if maybe a little too wordy) math fact clue for NINE. And I’d be remiss if I ended this post without a shoutout to my favorite NAT – my brother, who starts his sophomore year of college next weekend! 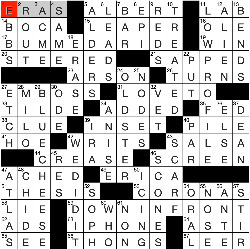 Here’s another sub-two-minute puz from the veteran Fred Piscop. Although this puzzle benefits from its revealer at 59D [Cry to one blocking your view at a concert … and a hint to the answers to starred clues], I can’t help feeling like the price of said revealer was one more themer, and I think there was probably a way to to make the theme work with four themers AND a revealer.

Anyway, said revealer is DOWN IN FRONT, and each theme phrase starts with a synonym for DOWN in its “sad” sense. We have:

There you have it: BUMMED, LOW, and BLUE are all synonyms for “sad” or DOWN. I appreciate that Fred was careful here to avoid using any of these words in their synonymous-with-DOWN sense in the theme phrases, so I guess as I armchair-construct this puzzle in my mind I realize it wouldn’t have been easy to come up with, say, a SAD phrase that would fulfill that requirement.

The fill was smooth, easy, and mostly unremarkable — although creating “mostly unremarkable” Monday fill is no easy feat. Are SCONES “biscuits,” though? Based on my unquestioned authority as an obsessive consumer of The Great British Baking Show, I would say no.

I am traveling this week and visiting Glacier National Park, so I’m afraid my write-ups will be on the terse side. I apologize to this week’s constructors (especially newer ones) in advance.

The revealer is GET HAPPY (63a, [Song sung by Judy Garland in “Summer Stock,” and what the first halves of the starred answers can all do]). Each of the other themers starts with a word that can follow “happy.” 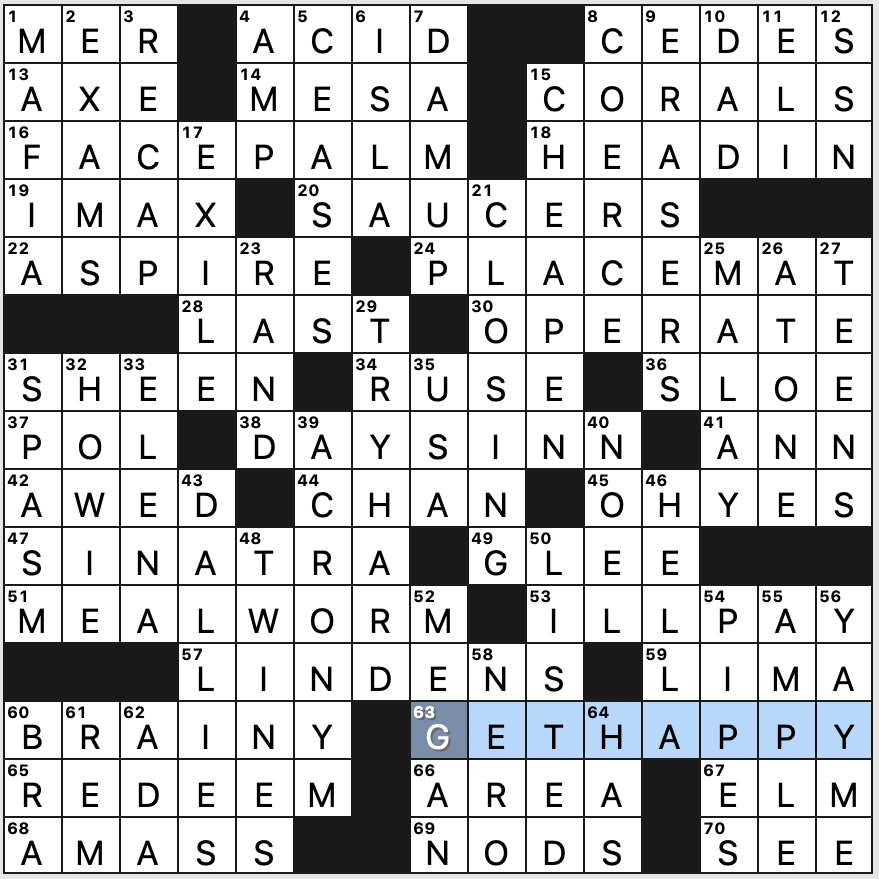 Ha! This was fun, wasn’t it? I didn’t realize there were that many phrases starting with “happy” but there’s also happy camper, happy hour, and happy medium. But I like this set just fine.

Nothing especially long in the fill, but SINATRA, TRY HARD, BRAINY, and ACRONYM are nice, although I would have laughed to see TRYHARD clued as a one word noun. Nothing to scowl at, so I’ll take it. 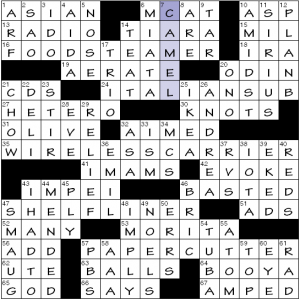 Am back after a couple of days being sort of laid-up. Might take me a while to get my sea legs back, so I hope you’ll understand if I don’t go overboard as I embark on writing up this puzzle.

Today’s offering is phrases that could be—belay that—are reinterpreted as containing names of types of ships.

Couldn’t find an interesting “ship of the desert” type song, but I will mention that that’s a common epithet for the CAMEL (7d [Caravan beast]). Intentional bonus?

Time for me to shove off.

Hi! This is Darby! Malaika not only created this awesome puzzle but she is on a much-deserved vacation, so I’ll be taking this and one other Monday USA Today! Happy to be here and to start off my week this way!

Theme: Every theme answer includes a bowling term at the end. 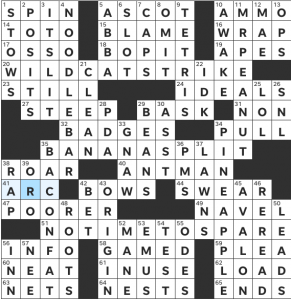 This was a cute theme. It started off very serious, as I’d never heard the phrase WILDCAT STRIKE before (but as always, I was happy to learn). “Hurry” felt like a short clue for BANANA SPLIT, but I got it on the crosses pretty easily, especially once I had TIME and SPARE filled in.

I liked the shape of this one too, with the longer downs in the upper left and lower right corners. As I imagine most feel, I like getting my shorter words out of the way first (and could, to some extent, with the Acrosses), but I appreciated the stretch in filling in STOWS, POSITS, IT’S LIT (an LOL inducing answer), and, of course, NOODLE BAR.

Speaking of NOODLE BAR (4d [“Eatery with udon and soba”]), it formed one of four bastions of food-centric long clues in this puzzle that I loved. We also have 11d [“Advertising mascot with a top hat and monocle”] MR. PEANUT, 35d [“Drippings used to make gravy”] BACON FAT spinning off BANANA SPLIT, and 34d [“Ingredient in tacos al pastor”] PINEAPPLE.

Other clues I enjoyed included:

I’d say this puzzle was a strike, in bowling (not baseball) terms and appreciated the SPIN (1a [“Twirl”]) on the bowling theme. 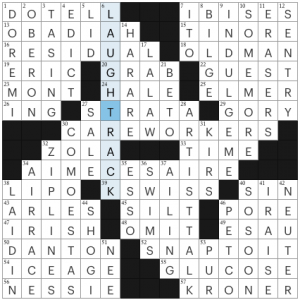 Fave clue: 6d. [Has on record?], LAUGH TRACK. Yes, it’s bogus to pluralize an interjection like “ha,” but when it facilitates trickery like this, I’m all for it.

Did not know: 34a. [Poet and intellectual who was a founder of the Negritude movement], AIME CESAIRE. You can read a bit about Aimé Césaire and read a couple of his poems here.

10d SOME MORE is clued as [Seconds], and that fits, I’m just not sure I’ve seen SOME MORE in a grid before. Not sure how well it flies.