This week we’re told: The answer to this week’s contest crossword is a five-letter word. I didn’t see obvious potential theme entries beyond the long acrosses FOOTSTOOLS and OUTERSPACE. I got distracted by the clue for DARTS for a bit (clued as “Game with a numbered board”), trying to tie that to the title. That turned out to be a red herring.

Two techniques helped me solve this relatively quickly: turn to the clues when the grid yields no signal, and Mike’s metas often use the central (or final) horizontal entry as a bonus themer or clue. I focused on FARGO and noticed the odd clue: “Significant eastern city of North Dakota.” The first letter of each word in the clue spelled SECOND, and I was off to the… well, hold that thought. Five entries followed the same pattern, spelling FIRST through FIFTH, here they are (in grid order):

Next step: take the first letter from ROMULAN, the second letter from FARGO, etc. In hindsight: I was quite fortunate by listing them in numeric order in my notes, avoiding a large trap: 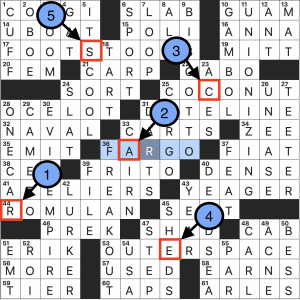 That spells RACES, our meta solution, connecting to the title “Starting Positions.” I rechecked my work before submitting and noticed that the letters spelled SCARE in grid order. I’m fairly confident that RACES is the correct solution (based on the title) but I can imagine that many solvers submitted SCARE (which is also a five-letter word), not thinking to try to put the letters in numeric order. A solving pal of mine did exactly that. It seems like this ambiguity could have been avoided with a slightly different clue, such as The answer to this week’s contest crossword is a five-letter plural noun.

I’m curious how everyone fared on this: were you team RACES or team SCARE (or perhaps another team entirely)? Please let me know in the comments. Mike referenced the Reservoir Dogs Soundtrack in his clue for COCONUT, so here’s another song from that album: we’ll end with this Soul Train performance of I Gotcha by Joe Tex, featuring dancer Damita Jo Freeman.