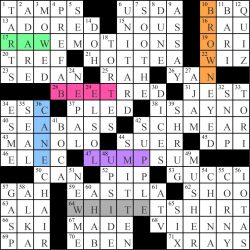 Good day, everyone! Hope all of you are doing well and, for those of you who were in the path of Hurricane Henri, I hope you all made it out just fine.

Today’s grid may very well have been inspired by Def Leppard, as six theme entries (four across, two down) start with words that either are a type of sugar or a word that can precede or follow the word “sugar.” Enjoy the sugar rush that comes with solving this grid!

Anything that reminds me of the saying, “If YAN can cook, so can you!,” is a major thumbs-up, given that I probably watched a whole lot of episodes of Yan Can Cook on PBS when growing up (26A: [TV chef Martin]). Since we’re in the mood for foods with this grid, there’s BBQ, which I’m sure I’ll see a lot of now that the unofficial end of summer, Labor Day, is coming up fast (10D: [Labor Day cookout, briefly]). Not a fish eater at all, but did have some SEA BASS some years back and did not mind the taste of it at all (40A: [Saltwater fish]). Haven’t had the courage to try it again, though! Bravo to the German gymnasts in Tokyo for their stance in fighting sexualization of the sport with each member wearing a UNITARD during the Olympics, a decision they first chose to enact to during the European Championships in April, a few months prior to the Olympics (6D: [Full-coverage garment chosen by the German gymnastics team at the Tokyo 2020 Olympics]). Who knows whether this uniform choice will start a trend or not, but given that the sport still trying to come out of the shadows of the news made by people once involved in the sport who have been charged and implicated in various sexually-related crimes against gymnasts, any actions aimed to usher in a zero-tolerance atmosphere with coaches and supporters when dealing with gymnasts is a great start. 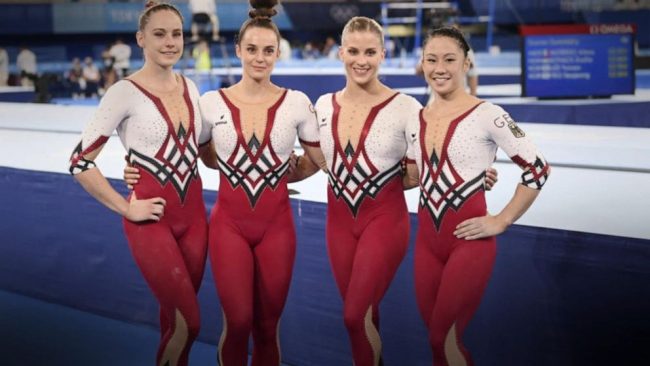 “Sports will make you smarter” moment of the day: BOCA (41D: [Florida city, familiarly]) – One of the more famous soccer clubs in the world, Boca Juniors, sometimes referred to as just “Boca,” is an Argentinian sports club headquartered in the Buenos Aires neighborhood La Boca. Some of the greatest players to have ever played the sport, including Diego Maradona, played for the club before moving on to illustrious careers playing in Europe. 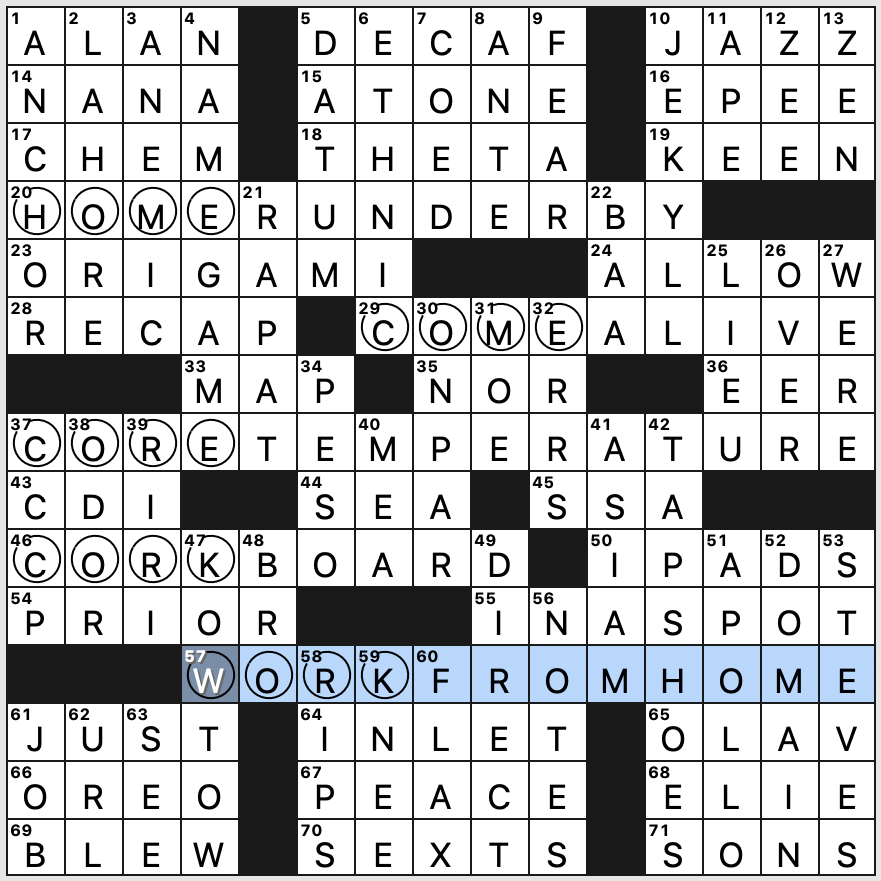 A timely theme as it’s looking less and less likely that people will be returning to offices en masse anytime soon.

Some solvers don’t like word ladders on principle, but I don’t mind one that has a good reason for living, and this one does.

New to me was AS I AM clued as [Brand for natural hair]. 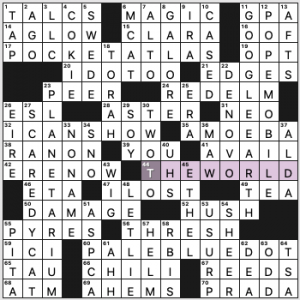 Fresh theme. “I CAN SHOW / YOU / THE WORLD” is a lyric from Aladdin, [promise that Aladdin sings to Jasmine (and a hint to the answers to the starred clues)]. The starred entries are all things that can show you the world: a POCKET ATLAS, the photo of Earth as seen from space called PALE BLUE DOT, GOOGLE EARTH, and a PLANETARIUM.

Fill I’m not wild about: plural TALCS, AHEMS, UHS, and AFTS. TWO TO. RED ELM is somewhat guessable, but more commonly known as the slippery elm, and maybe a lot to expect of a Tuesday-puzzle beginner. Ditto the quaint ERENOW.

Two Salners puzzles in a row for me. 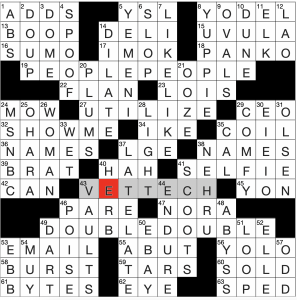 Quirky construction here with the intersecting themers and one split across the middle. You can typically expect something out-of-the-norm like that from this constructor, even when the puzzle’s theme is relatively straightforward, as it is here.

NAMES NAMES resonates the strongest with me. I don’t think I’ve heard the phrase PEOPLE PEOPLE in the plural like that. It’s always been PEOPLE PERSON that I hear. LIKE LIKE sounds like something a middle-schooler says and I really want to put the word “The” before LATE LATE and follow it with “Show.”

Fun to solve! I liked the clue for SPOOF only because I have seen Spaceballs despite never seeing any of the Star Wars movies. And I enjoyed it too, even though I clearly didn’t get most of the references.

VET TECH and Cathering O’HARA were my other faves in the fill. 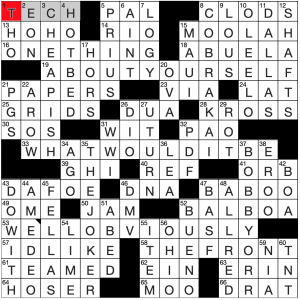 We have a quote puzzle this week, and the source of the quote is also hands down the Obscure Pop Culture Reference of the Week! I don’t know Sean Lock, but he is a British comic that passed away from lung cancer just 8 days ago on the 16th of August. The clue at 16-Across starts the quote:

16A [Question presented by Jimmy Carr that starts “If you could change …”, part 1]  ONE THING ABOUT YOUR SELF, WHAT WOULD IT BE?”

It got me to chuckle a bit, so I will call it OK. I realize some people cannot stand these types of puzzles, but this one is done well. It at least makes you laugh, which is what a puzzle SHOULD do: entertain you! I just wish I knew who this guy was! I will have to research him on YouTube later. 4.4 stars today. 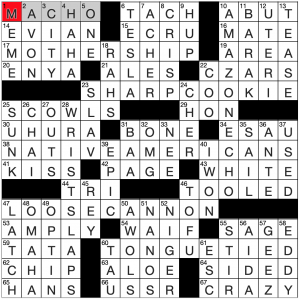 Cat got your tongue?

We are familiar with the phrases mother tongue, sharp tongue, native tongue and loose tongue. Easy! Just how I like a Tuesday puzzle! 4.6 stars from me.

An excellent collab for today’s Tuesday puzzle! The grid is lovely, with a flow to it that is accentuated by the black squares and areas. Lots of great fill as well and fun clues. Also, this puzzle was edited by Amanda Rafkin. 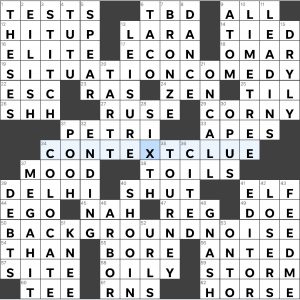 Theme: The first word of each themer is something you need to know.

A fun theme and while the title sets up the theme, it doesn’t out-right describe. Given that, the solver relies on the clues more in the puzzle, which is a nice change of pace. Of the themers, BACKGROUNDNOISE filled in first for me. CONTEXTCLUE feels very timely, given the beginning of school for students in the US this month. As I’ve not seen either “227” or “Schitt’s Creek”, SITUATIONCOMEDY needed the crosses for solving and even as it did, I wanted to use “situational” which was too many letters; to learn more about both tv shows or other more about many of the clues, check out Sally Hoelscher’s awesome blog https://usatodayxwordblog.blogspot.com/2021/08/august-24-2021.html that does a excellent deep-dives.

Stumpers: CORNY (“punny” fit but wasn’t right), RUSE (often “ploy” shows up), and GNASH (refers more to teeth to me instead of related to grinding)

All in all, a fantastic puzzle today! Looking forward to hopefully more collabs from Kim and Brooke.