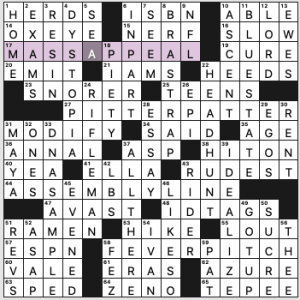 The name of the game is sales spiels, with familiar phrases clued as if they’re promotional spiels:

Fave fill: DYSTOPIA, DNA SAMPLE (ptoo, ptoo), and BLUE STATE (though I wouldn’t have minded a blue-less clue for AZURE).

Informational clue: 65a. [Word that comes from the Lakota for “dwelling”], TEPEE. Know your native etymologies!

Car makes are mashed together to create new phrases. 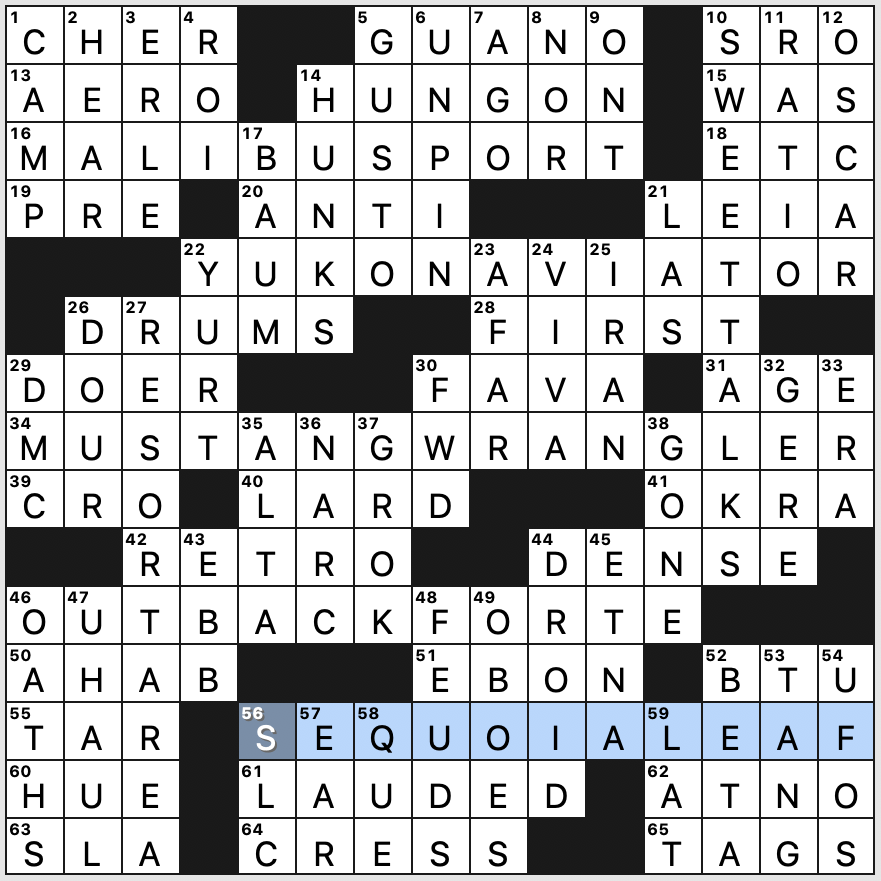 I’m confused as to why these clues aren’t question-marked. Usually if the theme entries aren’t actual, known phrases, then we mark the clues with question marks. It doesn’t seem like this puzzle should be any different. For example, the clue [Steak?] seems appropriate for the answer OUTBACK FORTE.

The title also confused me at first as well. I was expecting the letter S to play heavily into the theme, but I think it’s just there because we’re mashing cars together. A mashup is putting two disparate things together. A smashup is cars colliding.

Despite those issues, I enjoyed the concept here even if I didn’t know all the car models (Range Rover Sport, for example, or Lincoln Aviator).

Fave fill: SWEET TALKS, GUANO, YURT. Could’ve done without partial AT NO and 1970s initialism SLA. There also seemed to be a heavy amount of abbreviations as well: SRO, BTU, SLA, NOR, ONT, FWD, SLC, QUE.

Nice theme even though it has some confusing aspects. 3.6 stars.

Theme: Each theme answer has the word “code” hidden within it. 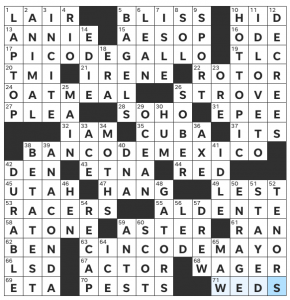 It’s always so satisfying when the title of a puzzle goes perfectly with the theme! I found it interesting that each of the theme answers was in the form of “____ DE ____”. I’m not sure if there are any english phrases that split the letters C O D E across multiple words and completely obscure the meaning of the “code” itself, so I like this choice. As food obsessed as I am, I didn’t know what molletes were – in Mexican cuisine, they’re an open-faced sandwich with cheese, beans, and PICO DE GALLO. Sounds delicious.

Besides the theme answers, I was very impressed by the number of long answers packed into the northeast and southwest corners of the puzzle. All six answers are fantastic and don’t need any bad answers to hold them together. My personal favorite was HOT TOPIC (was anyone else sad in the NYT last Friday when the plural of this answer was not clued as the store? Just me? Ok.), with ANACONDA and I’D LOVE TO as other standouts. The only part of the grid that gave me some trouble was the northwest with its large number of names: ANNIE, EDIE, IRENE. I didn’t know the people/etymology mentioned here, but luckily all the names themselves are fairly common, so I was able to get them with some crosses. Having never heard of AESOP soap certainly didn’t help me out, though.

Karen Lurie’s AVCX, “You Hate to See It” — Ben’s Review 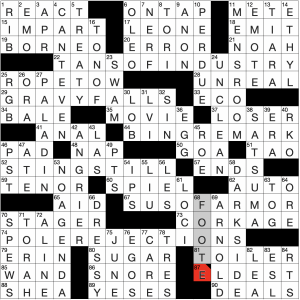 This week’s AVCX is a World Debut by constructor Karen Lurie.  Congrats, Karen!

The puzzle is titled “You Hate to See It”, and that’s a good ethos for what’s going on in this grid if you look at the theme entries:

If you hate to see “IT”, you’d probably remove it from the phrases TITANS OF INDUSTRY, GRAVITY FALLS, BITING REMARK, SITTING STILL, SUITS OF ARMOR, and POLITE REJECTIONS to get the phrases above.  If you’re not familiar with “sus” as an abbreviation for “suspect”, you probably haven’t played much Among Us, where you need to be communicating one of your fellow crewmates is suspected of being an alien very quickly before a vote.

A few other nice pieces of fill in this grid: BORNEO (“Pretty much the only place  you’ll find a proboscis monkey”), ROPE TOW, CORKAGE, CAN’T EVEN, PALADIN, SATSUMA, NO AGENDA, and DARK SIDE 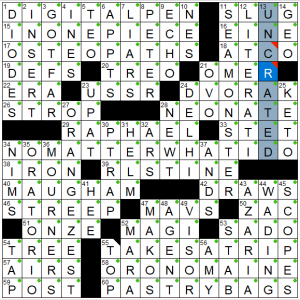 Today’s themeless from Liz Gorski is jam-packed with good stuff, some I was happy to learn (assuming I can commit it to memory), and some I’m happy to remember.

The marquee entry NO MATTER WHAT I DO (34a- “Why even bother?”) across the middle, is bracketed by a fun juxtaposition of the painter RAPHAEL and children’s horror author R.L. STINE. And there’s fun stuff around the corners, too: SEA MONSTER (11d- Scylla or Charybdis, in the Odyssey) and ORANGE ZEST (27d- Aromatic navel scrapings?) in particular.

Even the glue-y fill came with clues that brought a smile: a B.B. King reference for the partial at 23d- UP AT, and the great clue [Terms of an extended sentence?] for 37d- ANDS. 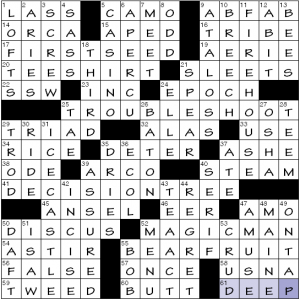 A progression theme, hinging on the second word of two-part phrases.

Though none of these in the loose sequence—seed, shoot, tree, fruit—are literally dendrological in meaning, the latter two tread quite close. Still, it’s a coherent enough theme.

Let’s survey the rest of the fill.

The most interesting thing for me about Alan Olschwang’s puzzle was learning that the revealing answer, THREEPEATS, was trademarked. I’m not sure how that can be possible, but ok. The puzzle theme itself is quite simple: several two part phrases’ first parts end in a double letter which is followed, in the second part, with the same letter. We have STIFFFINE, SQUALLLINE, JOSSSTICK and SHOOOFF, with a hidden message encouraging us to FLOS.