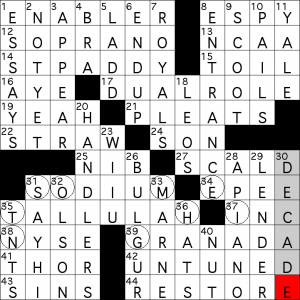 hello and welcome to episode #690 of matt gaffney’s weekly crossword contest, “Age Appropriate”. the instructions for this week 3 puzzle tell us that we’re looking for a well-known TV show. okay. what are the theme answers? there only appears to be one, in an undersized (12×12) grid: {250% of the time our contest answer aired — and a hint to the meta} DECADE.

what does this mean? well, for starters, it means we’re looking for a show that ran for four years. but more importantly, it means we’re trying to figure out what show might be hinted by the word DECADE, and the one that immediately came to mind was THIRTYSOMETHING, which refers to (as per the title) a decade of one’s life, not necessarily decade of, say, the twentieth century.

once you suspect that’s the answer, confirmation is easy to find: the letters in squares 31 to 39 (all of the “thirtysomethings” in the grid, since 30 itself is thirty-nothing) spell out SOMETHING, as you can see from my screenshot. the show ran from 1987 to 1991, so that matches the DECADE clue as well. it’s a nice touch that DECADE itself is at 30-down.

i am old enough to remember this show existing, but young enough that i was totally uninterested in watching a show about thirtysomethings because i was a tween and grownups were boring, so i’m sure i’ve never seen an episode. these days, i am occasionally reminded of the show having existed because every now and then it appears in a clue for ken OLIN. but apparently it was well received in its day and won a fistful of emmys during its four-year run.

so that’s the entire meta, unless i’m missing something. it’s an interesting mechanism for a meta, where you almost need to think of the answer first and then confirm it instead of forward-solving it. i suppose it’s not impossible to forward-solve, since you might see DECADE and decide to look at the numbered squares ten at a time. but i’m guessing that most solvers thought of the answer first and then found the mechanism.

i’m not going to lie, though: this felt slight. even in a grid that’s only 12×12, i definitely thought “is that all?” when i found it. i’m sure that’s not the reaction matt was hoping for. the entire top half of the grid is, unless i’m mistaken, unconstrained by the meta, and i can’t say i remember any meta crossword where that was the case. naturally, the fill in the top half is squeaky-clean, and actually it’s pretty good in the bottom half too although i didn’t love the entries TNTS (as a verb?) or A PIANO (as a partial phrase from a twilight zone episode title i’ve never heard of).