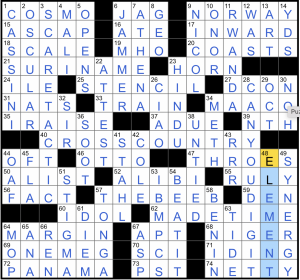 Today’s puzzle from Ashish Vengsarkar grew on me the more I thought about it and realized what was going on, plus there’s a final aha where…well, I’ll get to that in a minute.

There are four squares in the grid that get left blank if you solve the clues as-is:

There’s a revealer at 40A cluing “One way to run … or a hint to four geographical intersections found in this grid”.  That would be CROSS COUNTRY, and indeed, you may have already noticed that each of the empty squares can make a country across and down when a letter is added.  I in the upper left for SURINAME and MALI, R in the upper right making NORWAY and RWANDA, A in the lower left making PANAMA and TONGA, and N in the lower right making NIGER and BENIN.  Put it all together and you get one more country from top to bottom, left to right: IRAN.  That last bit is what pushed this over the edge for me as fully clever – any time I’m adding letters, I want them to resolve, and these do so, so nicely.

If you, like me, had never encountered pochoir printing, which uses STENCILs, here’s more info on what that looks like. 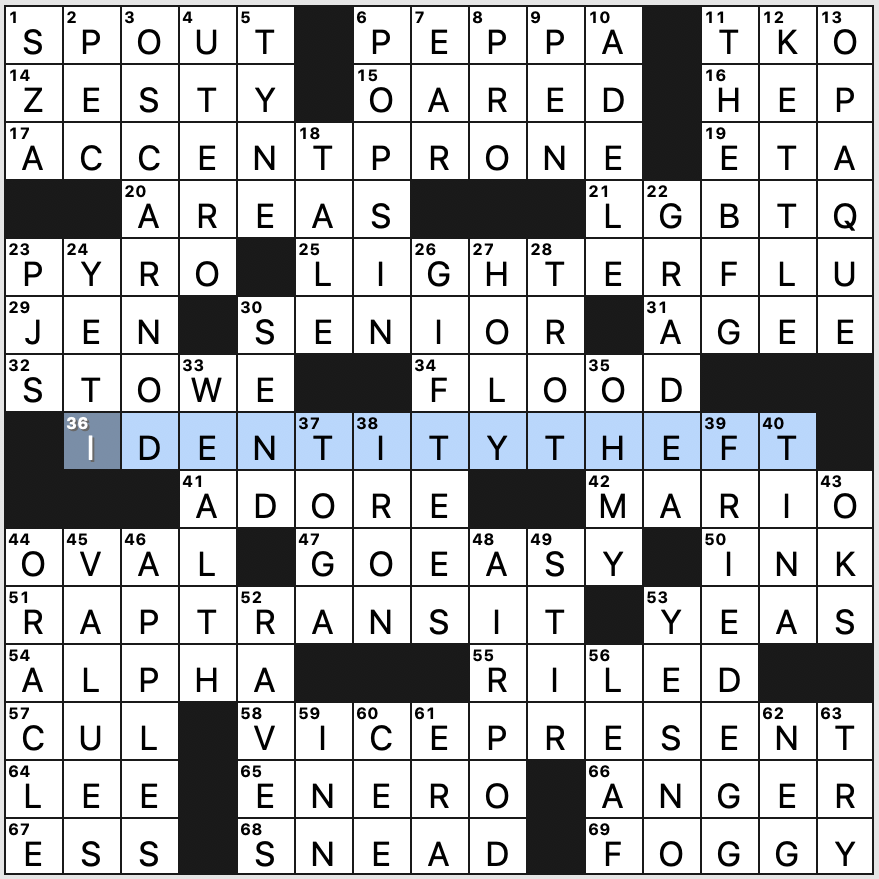 I’m pretty sure I’ve seen this theme before, but maybe not in the WSJ. The entries here are fine though they aren’t entirely consistent. In two cases the other word changes meaning, in two they don’t.

In the fill I like OSCAR NOD, FRIED EGG, THE BFG, and GO EASY.

Solid puzzle, though I’ve seen the theme before. 3.5 stars.

THEME: Hair styles are “split” and can be found at the beginning/end of theme answers. 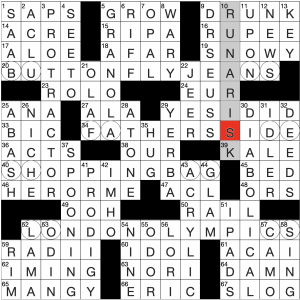 I was thinking just before I opened the puzzle that I hadn’t blogged a circle-dependent Universal theme in quite a while, and here one is! With the very consistent 2-letters at the beginning, 2-letters at the end motif, it really doesn’t matter much. Very easy to grok with or without circles. So I’ll (mostly) forego my gripe about Universal’s inability to publish circles in its grids on its major platforms (but seriously, why not update that software like the cool kids are doing?)

Lots of fun stuff in this puzzle. Fresh and new for me were the terms “dada” and “dadi” (Hindi), Kendrick Lamar’s Pulitzer-winning Damn, and YERBA. I thought that was a hotel name in a Jack White song (googles)… ah, that’s Hotel Yorba. Not even close!

LOCS as a shortening for dreadlocks was also new for me.

46A [Cry from a jealous girlfriend, perhaps] HER OR ME! Sounds more pissed than jealous, and the girlfriend’s partner sounds a bit two-timey. Get out of that relationship!

Nit: BUNS is oddly plural I think, unless of course it’s referring to one person with multiple buns. Like Princess Leia perhaps?

3.6 Stars (with or without circles)

Theme: Every themed answer includes a twist on a traditional item found in a backpack on the first day of school. 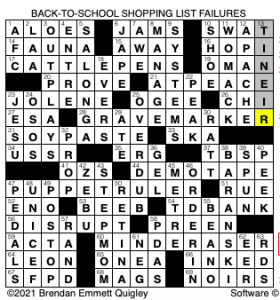 As always, I’m impressed with BEQ’s ability to squeeze in so many creative theme answers. DEMO TAPE was my favorite, as it was the first themer I got. From there, it was pretty easy to fill in the appropriate school supply item.The mention of “stock holders” in 17a drove me in a much more economics/finance direction until I had C_T___ PENS. I thought the cluing on SOY PASTE could be cleaned up a bit, but overall, I thought all of these were clever. I also particularly loved the dad joke in GRAVE MARKER’s clue.

We saw a lot of people in this puzzle, including Dolly Parton (23a, more on that below), Will ENO (52a), Mike Trout of the LAA (2d), Lea SALONGA (5d), Bobby WOMACK (11d), Christine BARANSKI (38d), and Paul RAND (57d). I thought there was generally a nice mix of areas for these, and it was relatively easy to fill them on crosses even if you aren’t super familiar.

Sum total, I appreciated the twist on back to school season. At times, I felt myself in muddle through mode, but there were some really bright spots in both theme and non-theme clues that made for a good puzzle. If you need me, I’ll be listening to JOLENE. Feel free to join in. 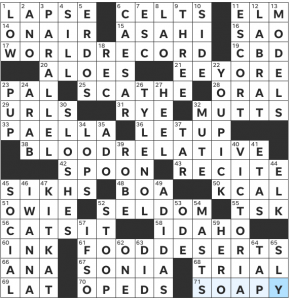 Theme: Each theme answer begins with a type of bank.

Fun one from Rafael and editor Amanda Rafkin! I liked the choice to go for types of banks rather than, like, brand names such as “Chase”. All of the theme answers were solid stand-alone phrases and all fit the theme well.

Lots of good fill in the 6/7 length slots today – I particularly enjoyed CATSIT, KITKAT, SCATHE, TYLENOL, YOU PICK, and EEYORE. From a cluing standpoint, I liked the reference to the Amanda Gorman poem “ODE to our ocean” at 53d and 42a’s little SPOON (person getting snuggled). 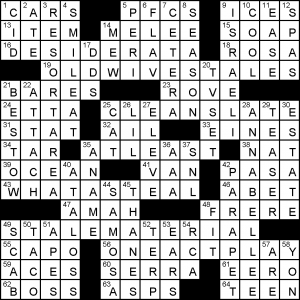 Today’s puzzle by Chris Sablich features a somewhat oblique revealer: STALEMATERIAL. There are another four entries with anagrams of STALE: oldwivesTALES, cleanSLATE, atLEAST, and whataSTEAL. ATLEAST was a cute touch.