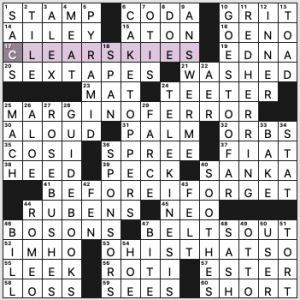 Ahh! I may have forgotten to watch Drag Race tonight, but a Friday puzzle by Robyn is also something to look forward to on a Thursday night. I’m not alone—Brian Cimmet tweeted that she should write all the puzzles. He’s not wrong.

Fave stuff: CLEAR SKIES, MARGIN OF ERROR, shopping SPREE, “BEFORE I FORGET…,” “OH, IS THAT SO?,” travel GUIDEBOOKS, CAKE TOPPERS, “ANSWER ME!,” and a RED HERRING.

Surprised to see a crosswordese prefix in the grid, but lo and behold it isn’t clued as a prefix: 16a. [Greek goddess who could turn water into wine], OENO. Seems like someone every fraternity or sorority house should have a shrine to, no? 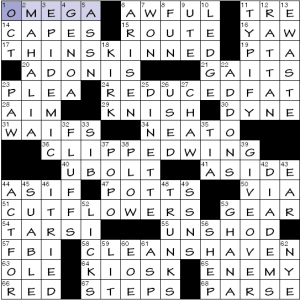 68-across is [Analyze, in a way] PARSE. The  question-marked theme clues are minimal, and the key is to PARSE them properly. Crossings are most assuredly necessary to get a handle on them.

The terse clues are the result of removing the first and last letters from slightly longer words, and the answers are sort of a literal representation of what’s occurred.

In cryptic crosswords, removing the first letter is called beheadment and doing the same for the final letter is curtailment. Or at least those were the terms in vogue when I was more active with cryptics. So these cryptic-flavored themers combine the two.

I liked the theme okay. Moving on,

Considered sharing the the AWFUL (?) (6a) Leonard Nimoy version, but as this is DoaCF, here’s AL HIRT doing his best to cover pop hits of the day in 1968: 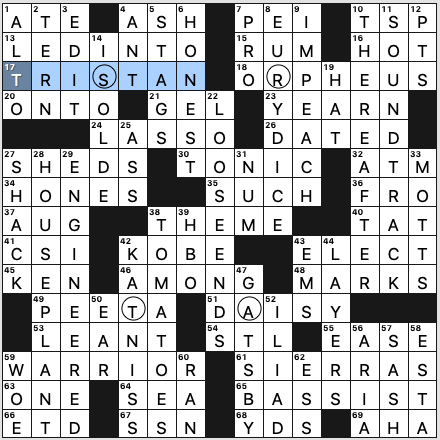 Wow. There’s a lot to this. I’m not going to lie and say I was knowledgable on all these couples to decisively say they’re star-crossed or not, but some cursory Wikipedia searches confirms they are, more or less. And to have them all cross at the letters S, T, A, and R is an elegant touch.

Of course, one would expect to see Romeo and Juliet in this group, and hey! They can cross at the E, you say. Ah, but there’s no E in STAR which are the letters used in the crossings of the other pairings. So Romeo and Juliet were so star-crossed that they were doomed to not appear in a star-crossed lovers crossword puzzle.

I’m not so keen on the weird revealer THEME (38a, [This puzzle’s has a bonus if you read the letters where the lovers cross in order by column]. I’m not so sure that this is necessary, but even if a revealer was needed, surely something better could have been found.

Non-theme likes: LOOSE ENDS, SOUNDTRACK, HOUSE PLANT, IMPEACH, TOMATOES. Pretty impressive to have all those crossing themers and still have enough room for this much nice long fill.

Impressive construction in this grid, and plenty of long non-theme fill to sink one’s teeth into. Four stars.

Theme: The first letter of each word in each theme answer comes together to spell out “SIT.” 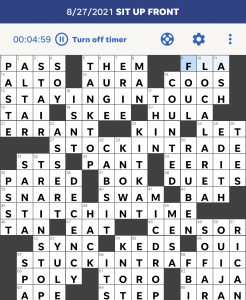 This wasn’t necessarily my favorite theme. While creative, I would have liked to see more variation with the I of SIT since it was “IN” for each answer. STITCH IN TIME was a really fun answer to punch in, however.

Overall, I found the fill to be challenging in some areas, with a few answers throwing me back to SAT prep. Top two words I’d bet to find on a high school junior’s flashcards include 21a [“Off the mark”]’s ERRANT and 22d [“State confidently”]’s ATTEST.

There were also a few DUETS (38a [“Songs sung in pairs”]) that I enjoyed quite a bit. First and foremost, the dual appearances of ERIE and EERIE. I loved that 7d was clued as [“Great Lake with 871 miles of shoreline”] since, as I’ve said before, it’s my favorite Great Lake. Paired with its [“Shudder-inducing”] homophone in 34a, it was a great combo of clues. The same could also be said for 35a [“Peeled with a knife”] and 39a [“Trap”] (PARED and SNARE) respectively. The near-rhymes also were connected as branches of PSST (35d [“Furtive ‘Look over here!’”].

That’s all from me *MIC DROP* (41d [“Triumphant move after a great performance”]). Have a good weekend! 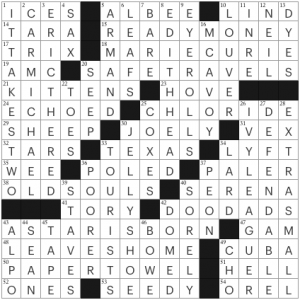 Hi ho! Amy filling in for the vacationing Malaika.

Smooth and rich as silky nutmeg ganache, lots of fun fill. Highlights for me include the always incredible MARIE CURIE, “SAFE TRAVELS,” OLD SOULS, A STAR IS BORN, PAPER TOWEL (product recommendation: Brawny sells paper towels that are perforated so that you can use a quarter or half sheet and I love it), Stokely CARMICHAEL (aka Kwame Ture), ERIC THE RED, EDITH HEAD, and EYE ROLLS. Also: JELLY SHOE! I had at least one pair at some point. They were cuter than Crocs, I’ll say that.