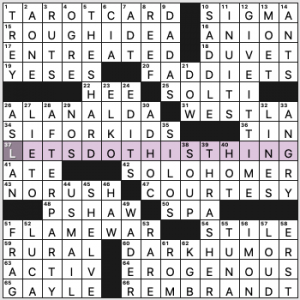 The crossword blogger’s motto: “LET’S DO THIS THING.” Here we go.

Not so keen on the movie Bridge of Spies getting three clues here—ALAN ALDA, CIA, and KGB. Overkill!

Could not get a good foothold in the NW corner. Trying OTHER for 19a. [Column on a survey] (instead of YESES) took a toll. And I wanted the [Divine instrument?] to be some sort of HARP rather than a single TAROT CARD. Plural RUTS for the singular 3d. [Pattern of monotony] also stymied me. And for 5d. [U.K.’s tallest building, named for its look], all I could think of was the Gherkin, which is one letter too short but more memorably nicknamed than THE SHARD. And we mustn’t overlook 1d. [Long shot, informally], which I was reading idiomatically rather than literally; a TREY or three-point shot in basketball is a shot from a longer distance than a two-point basket. Anyone else flail haplessly in that section but not so much in the rest of the puzzle? 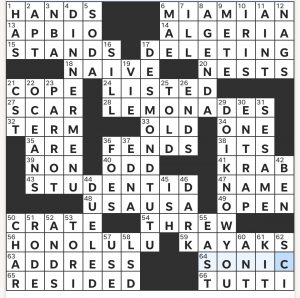 Very fun one from USA Today! Aside from the slightly awkward 6a. MIAMIAN and the less-than-ideal double of 48a. USA USA (however fitting of the outlet it appears in), I enjoyed the relatively clean fill the puzzle had to offer. Though the grid was on the segmented side (with some unusual black square placements and shapes), it was clued fairly and constructed smoothly enough that I didn’t get stuck.

Our theme answers of the day consist of 4d. DINNER MENU, 17d. DESMOND TUTU, and 29d. DO I KNOW YOU. The theme unfolds subtly but nicely, consisting of three down answers starting with “D” and ending with “U,” respectively standing for “down” and “up.” In this sense, the “upside” of the answer (signified by the letter “U”) is oriented below the “downside.” In other words, the puzzle’s title, “Upside Down.” Neat! As a side note, I enjoyed that these answers all had the same number of syllables (four, not that I’m counting). Adds a bit of extra consistency.

Some fun and fresh answers today:

43a. [High schooler’s card] — As we rapidly approach back-to-school season, high school and college students alike will be scrambling to find their STUDENT IDs before a hefty replacement fine catches up to them. I’m starting the search for mine now.

56a. [Capital of Hawaii] — Considering how often I spot MAUI, OAHU, and even the occasional KAUAI in crosswords, it’s quite exciting to see the elusive HONOLULU used in a grid.

37d. [Name hidden in “assumed name”] — What a unique clue for EDNA! Mental gymnastics type clues like these sometimes bother me, but this one was a good take on a relatively familiar entry.

Erik Agard’s commitment toward diversifying the puzzle world has been unwavering for at least as long as I’ve been in it, so it came as no surprise that there were several noticeably inclusive clues today:

11d. [Opposite of 35-across] — 35a. was ARE, and its opposite is AIN’T. No fill-in-the-blanks, no qualifier on a dialect, just clued straight. It’s simple, but very effective and very refreshing.

17d. [17d. [Source of the quote “If you are neutral in situations of injustice, you have chosen the side of the oppressor”] — DESMOND TUTU—in a theme answer no less!—is a fantastic entry, one rounded off with a satisfying clue.

42d. [“The Autobiography of a Transgender Scientist” author Barres] for BEN. Adding this book to my to-read list! 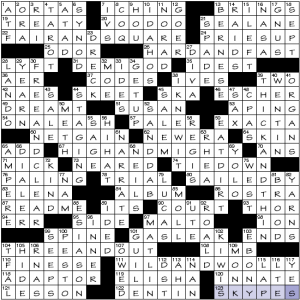 Simply put, idiomatic phrases comprised by two adjectives joined by ‘and’ are reinterpreted more literally. Am not sure I fully understand the title in this context.

Kind of a no-nonsense theme, and that’s ok with me. Or, like a sharp but foppish knife: fine and dandy? Oh well, I tried. Isn’t as easy as it looks!

Write-up is essentially finished, but I need to add some padding to the copy so that the text continues below the PALING image (right) to ensure that there isn’t a large white space before I add a music video, which—as per usual—will essentially occupy the width of the content pane.

Something different today! We don’t see gimmicks like this very often in the Universal. I love it when they introduce solvers to wacky concepts.

THEME:  Words that can precede ALLEY are “hidden” in 4 different areas of black squares.

Best to see the solution grid here… the words that are “hiding” are: 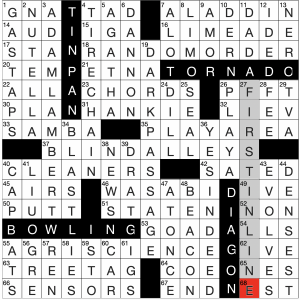 This one was mostly enjoyable in a “oooh… something different is happening today” sense. And that semi-scintillating feeling held for the duration of the solve for me. But there’s a big “however” coming…

However, it wound up falling flat in my opinion. I really want to like it, but something felt off. One thing is that the letters in the white squares that make up the theme (mostly) aren’t stand-alone acceptable crossword words. For example, STO, IGS, LLS, IST, GNA, AUD,  etc. I know it’s not really fair to compare, but Evan Birnholz frequently publishes similar gimmicks in the WaPo under his strict rule that the visible grid must always feature acceptable crossword words. A challenge for sure. But I think that if you’re going for a stunt like this, you probably shouldn’t settle for less. In the SE corner of the grid alone IVE and IVE both appear next to one another. Sure, it’s not technically a “dupe” (DIVE and GIVE), but that’s not what we see.

For my solve, I took the time to mentally spell out TINPAN and then said “types of alleys!” Didn’t try to figure out the others until post solve. TORNADO Alley and DIAGON Alley weren’t overly familiar to me (I’ll get to that Harry Potter series someday), but I sense I’m alone there, so I’ll chalk that up to my own ignorance. BLIND ALLEYS as a phrase isn’t too familiar to me either.

There’s one more “however” coming….

However, I usually try to solve and comment on Universal from a novice perspective. And if this were my first time coming across a theme like this, and I took the time to figure it out, I’d be in for a great aha moment… and I’d be hooked. I think the nudge in the initial instructions for each of the four starred series of clues was well-placed.

So my rather stodgy comments should be juxtaposed with some hefty praise for introducing this theme type in an accessible way.

Awesome clue for CHORDS. Reminds me of this.

Gonna forego a rating for this puzzle as it would vary so strongly from two different perspectives. Regardless, it was an intriguing solve. 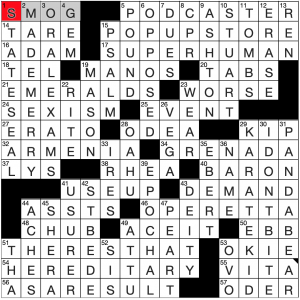 This one wasn’t too bad today. Solved in under 5 minutes! I still don’t know how those top solvers solve an entire Sunday puzzle in times like that! I simply cannot type that fast! But this was a smooth solve, and I have come to enjoy Craig’s puzzles quite a bit now. Nothing too obscure in this one, so hopefully you found it smooth sailing as well! 4.4 stars.

Off to solve more puzzles! 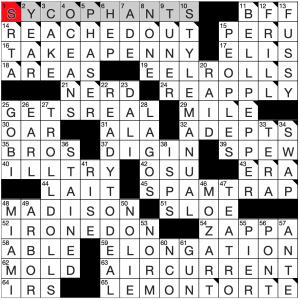 I was so locked into solving, I didn’t realize that the title “Saturday Stumper” has been brought back! I think it has been this way for a couple of weeks, now. I think, at least for the last two or three, the difficulty level was slightly ramped up a bit. You should be able to see many correction marks in my Across Lite solve image! (I should solve more in other formats that DON’T show these errors!) Lots of toughies in this one, so those of you that enjoy pulling your hair out should be in hog heaven! I at least hope you enjoyed the puzzle, as it is a pretty good challenge. 4.5 stars from me.