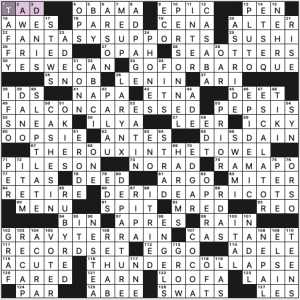 The theme entries are made by adding a schwa sound (the “Uh” of the puzzle’s title) to familiar phrases:

The theme is OK but none of the themers actually amused me. Something like THOREAU IN THE TRASH, would that work here?

Theme: Each themed answer includes the letters “ROME” as part of a down answer, essentially making Rome fall. 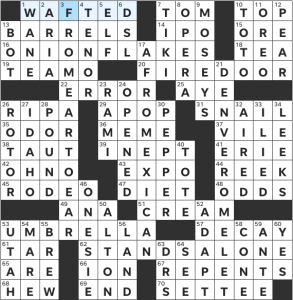 I enjoyed this theme quite a bit. It was a clever play on its title “The Fall of Rome,” and as a history nerd, I appreciated the nod. Grid-wise, I also enjoyed the inclusion of lengthier answers like ONION FLAKES (16a [“Dried veggie bits in soups”]) and STANDS ALONE (62a [“Is peerless”]). They were nice distractors from the theme that also managed to contribute to it, if that makes sense?

ARIA in 2d and OPERA in 8d both referred to Angela Gheorghiu, a Romanian opera singer, which was an interesting combo and pushed me to learn more about the well-known soprano. I wish that the two words weren’t so apparently related, but I do appreciate the push to fill in the operatic gap in my knowledge.

Lastly, some of my faves from today include:

That’s all from me today, folks! Enjoy your Sunday!

I CAN’T STRESS THIS ENOUGH… IT WAS FUN WHILE IT LASTED!

That about sums up a Birnholz themeless for me! Tough to pull off a consistently engaging 21x themeless, but he consistently does imo. 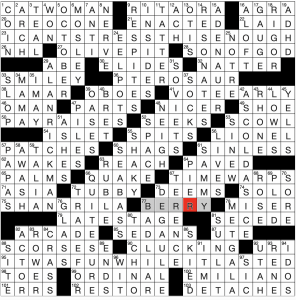 Had no clue LOWE’S has been around for 100 years! I just thought they popped up in response to The Home Depot.

Have to run! Taking the nieces/nephews to an amusement park as the last hurrah before school starts.

THEME: Common words parsed as if the first two letters are abbreviations. 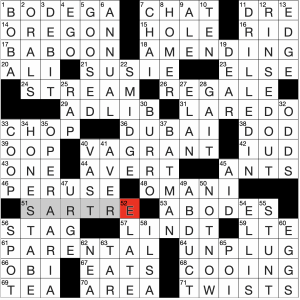 Fun concept! I think I’ve seen similar ideas in the past, but it’s a good one. And a lot of theme here too. Oddly enough, I didn’t even consider the theme until about 75% of the way through… I think it’s because I just solved the 21x WaPo themeless.

RINSED OUT and DRILLED IN felt nicely juxtaposed with that last word.

OPERA ARIA is strange to me. Feels redundant.

No, the title is not a mistake, and I don’t believe the Universal Sunday puzzles are going title-less. Instead, this is a puzzle about CATCHING SOME SUN (61a, [Enjoying a summer afternoon … or what each starred clue’s answer has been doing, based on its altered word and three letters above it?]). Those theme answers are familiar phrases except one word has been changed due to the effects of the SUN, which are the three letters above each changed word. 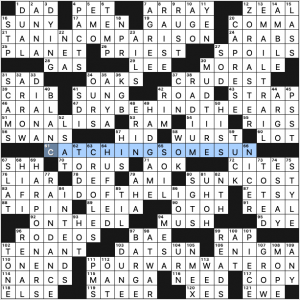 This is an exceptionally appropriate theme for me as I just returned from a week at Glacier National Park, the highlight of which is traveling Going-to-the-Sun Road, one of the most picturesque roads in America. 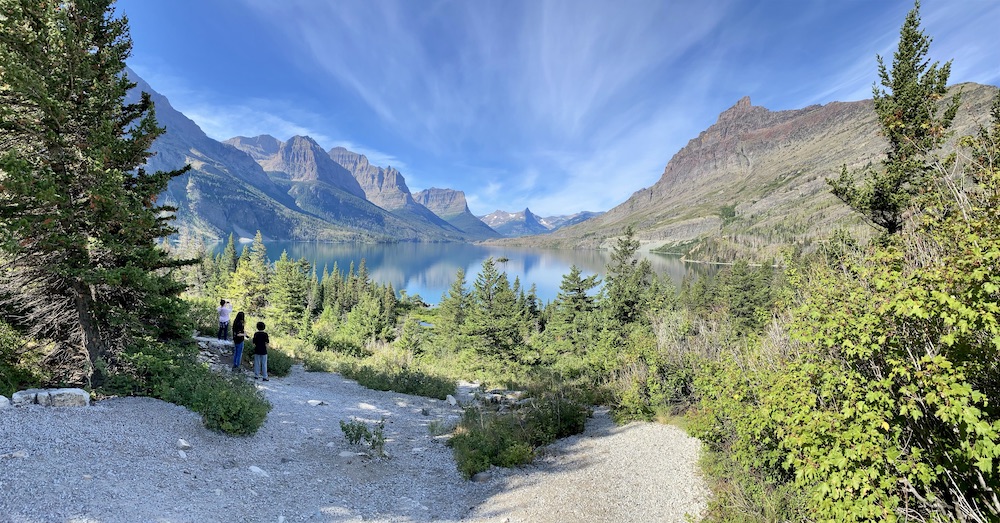 Pretty cool theme. What I like most about it is that each entry features a different aspect of the sun’s power: burning or coloring, drying, lighting, and heating. That’s an elegant touch. And I didn’t pay close enough attention to the revealer clue to realize there were SUNs everywhere…until I started writing this up, that is. When I realized that, I was even more impressed. Nicely done.

The only thing I question is why clue it with respect to the original phrases. Why not alter the clues and add a question mark? For example, [*Seem more impressive?] feels like an apt clue for TAN IN COMPARISON and injects just a little bit of humor. Similarly, [*Experienced?], [*Worried about opening the curtains, say?], and [*Be encouraging about ?] would seem to work for the rest of the themers.

Moving on, if you’ve had enough SUN for a while (as I have; we need some rain here in the west), there’s a RAIN DANCE going on at 77d. Other highlights include ZOROASTER, MONA LISA, CAPRESE, MUD TIRE, RADIUM, CREOLES, HARPOONERS, RODEOS, and ENIGMA. I’m not so sure about EMAIL TRAIL. How does that differ from an “email thread” (which seems more common to me)?