New Crossword Fundraiser! If you’re like me and the crossword highlights on Monday are the themelesses (New Yorker and BEQ), don’t miss out on Sid Sivakumar’s set of four wide-open themeless puzzles. Simply donate $10 or more to aid Afghan women and girls, forward your email receipt to Sid, and he’ll email you the puzzles in .puz/.pdf forms. I just solved #1 and it was tougher than a Friday NYT but not by too much. (I not so secretly hope the other three are harder.) The details and an annotated list of organizations to donate to are at the Sid’s Grids site.

Theme: Today’s theme is a vowel progression – the first word of each theme answer places the vowels, in order, in the middle of “L” and the sound “CKS/X” (if you’re confused, say the theme answers aloud in order!) 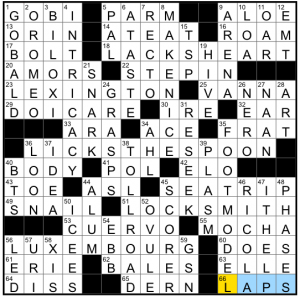 A solid set of theme answers today! I liked that there were multiple answers using both the X and the CKS spelling of the sounds, which kept the puzzle consistent. I was able to figure out the theme partway through the solve, which was very helpful for getting LUXEMBOURG straight off the bat. I also loved LICKS THE SPOON – I personally use this phrase most when eating the remaining raw batter after putting whatever I am (or, let’s be honest, usually someone else is) baking into the oven. Good memories.

Brooke talks a lot about this puzzle’s fill in her Wordplay constructor notes, which I recommend taking a look at. I have to agree with her that this puzzle’s fill isn’t the cleanest, which is especially important on a Monday. On my first pass through the northwest, most of the words eluded me: I didn’t know OR IN, AMORS, RECTO, and I had “Ari” instead of ARA. There are some nice longer answers in the puzzle, notably FOOT MODEL, INTRICACY, and DO I CARE. However, my solve of the puzzle felt a bit choppy, I think because various sections of the puzzle were either quite wide open or full of three letter words (for example, the middle of the puzzle and the northeast and southwest corners). Overall, I wish the puzzle had a bit better flow than it does, but it was still an enjoyable solve for me. 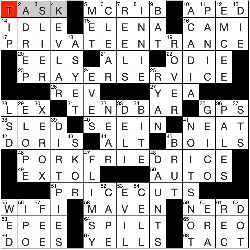 C.C./Zhouqin Burnikel has been such a fixture on the USA Today puzzle of late that I suspect she hasn’t had as much time to make the easy puzzles that are her specialty for a lot of other outlets. So it’s nice to see her in LAT today.

This grid has left-right symmetry rather than the usual rotational symmetry to accommodate the different lengths of the first themer and the revealer (15 and 9 letters, respectively). Starting off with the revealer at 51A [Markdowns, and what 17-, 23-, and 46-Across all exhibit], we get PRICE CUTS. That is, the word PRICE is CUT in two, with the first part of the word at the beginning of the theme phrase and the second part at the end. Like so:

Notice a few nice touches in the themers: First, PRICE is broken up in a different way in each theme entry. Second, a playful question-mark theme clue is a rarity on Monday. Last but not least, when I solve a Burnikel puzzle I know I’m in for at least one entry that references delicious Asian food, and here it is with themer #3.

When I solve a Burnikel puzzle I also expect an easy-breezy experience, so I was a little surprised to go up near the 2:30 mark on this one. This is not to say that the puzzle was hard, but there were a couple of places of ambiguity that might have made this puzzle more of a Tuesday or even Wednesday thing. For example, 1A [To-do list entry] could as easily be TASK as the correct answer of ITEM; 47D [Weak, as an excuse] can also be FEEBLE instead of FLIMSY if all you’ve got is the F in there when you get there, as I did. (41A [Well-organized] could also be TIDY instead of NEAT, although I did not make that mistake.) Couple that with some on-the-harder side clues for names like ELENA and DORIS and this puzzle gets harder than you expect out of Monday.

NOTE: This is not a knock against introducing us solvers to new ELENAs and DORISes. I do think it’s a reason to schedule the puzzle on Tuesday instead of Monday.

Theme: Vowel run where the theme entries are phrases that start with the letters RxB, where x represents the vowels in sequence. 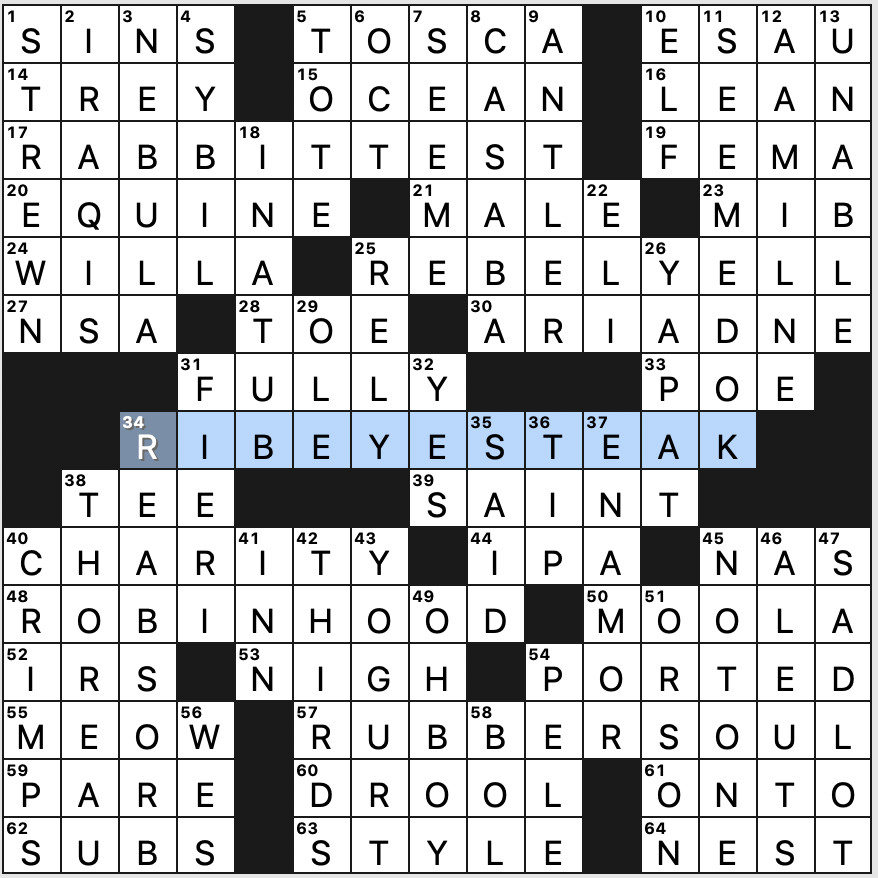 Often a title like “R&B” would indicate two-word phrases with those initials (like rubber band or rock bottom), so this was a little unexpected. I’m not going to say a vowel run is the most thrilling theme type out there, but this is solid and it works, and if it helps a newer solver fill the grid on a Monday, it’s done its job.

What I like best about the execution here is the consistency. Each two-word phrase is three syllables long with two in the first word and one in the second. I’m sure that’s not just coincidence and that the constructors picked these in part for that reason. That’s an elegant touch and it lends a rhythmic air to the set as a whole.

In the fill, the longest entries, REABSORB and SEEMED OK, are just…okay. But I do like ARIADNE and the two writers, A. A. MILNE and THOREAU (plus POE and WILLA Cather).

Today I Learned: The following song exists and won a grammy in 1969. Later, it appeared on Rhino’s “Golden Throats 4: Celebrities Butcher the Beatles“. It’s an ungodly mashup of “Norwegian Wood” and the Mission: Impossible theme that somehow sorta works. Have a listen…if you dare. (And here’s a bonus: Joe Pesci’s version of “Got To Get You Into My Life” ain’t half bad.) 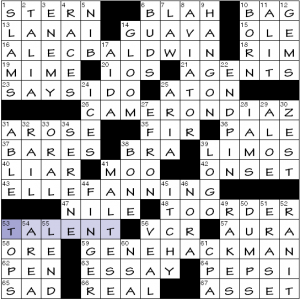 Their initials are sequential, in case it was not obvious. Since I’m fresh off a proofreading jag, I’ll point out that there should have been an ellipsis at the end of the clue for 16-across. Normally I wouldn’t be quite so nitpicky.

It feels kind of like only part of a theme. As if it’s calling out for two more crosswords to complete the alphabet (though I’m sure there are some letter pairs it would be difficult if not impossible to find well-known actors for). Nevertheless, let’s see what tomorrow brings from the Universal syndicate.

There’s a two-part entry at 53a & 21a: [… actors’ representatives] TALENT | AGENTS. I’m choosing to interpret this as an oblique reference to the theme, as initials can be interpreted as ‘representatives’. 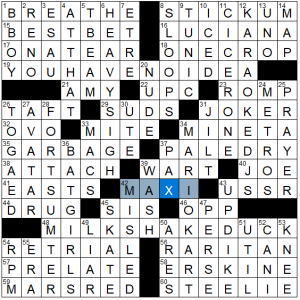 I’m going to get right to it with BEQ’s offering: MILKSHAKE DUCK! (48a- Person who, shortly after becoming popular, is later discovered to be problematic).

Coined in this 2016 tweet, this is exactly the type of internet culture that I relish in indie puzzles. It’s hard for me to believe this is the first time we’ve seen it in a puzzle, but I think that might be the case.

I liked the other long answers and their clues, as well: YOU HAVE NO IDEA (19a- “It’s unbelievable!”), KARAOKE DJS (12d- Providers of song lyrics), and FORT SUMTER (28d- Charleston war memorial). 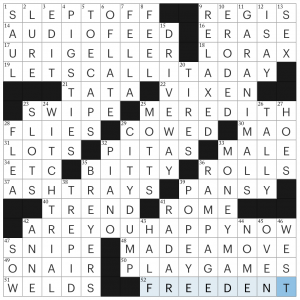 This puzzle was a joy to solve. An open grid with plenty of long, engaging fill, with tricky but fresh-feeling clues. An absolute pleasure of a grid from Patrick Berry.

Some clues and answers I especially enjoyed:

1a. [Lost in dreamland?] –– Really nice opening clue for SLEPT OFF. Tricky, but not so much so that it blocked off that corner for me. Even before I got the pun angle, I manage to at least fill in SLEPT.

9a. [Onetime partner of Kelly] –– The theme song for REGIS and Kelly is forever burned into my brain due to their once-perpetual spot on taxi TVs.  Fun reminder from that entry.

48a. [Abandoned the wait-and-see policy] ––  Do you ever find that something about an activity prompts a themed soundtrack behind it? For example, I had “Ophelia” by The Lumineers playing while I read Hamlet, and “What You Own” from Rent while I read “Millenium Approaches” in Angels in America. I have no idea if this is relatable. In any case, this entry cemented Lawrence’s “Make a Move” as the earworm of the day. It was also quite ironic to see MADE A MOVE appear directly above its opposite, PLAY GAMES, at 50a. Anyone else getting mixed signals?

51a. [Metalworker’s unions?] –– Cute clue for WELDS. Not too tricky, but still more interesting than a straight clue––I liked the union angle.

4d. [Messy pens] –– I couldn’t for the life of me figure this one out, thinking it must have something to do with ink, until I got PIGSTIES. Well-clued.

13d. [Congress] –– Another very successful misdirect. What synonym for the political entity could be a three letter word? None, as it turns out, since the entry refers to the lesser-used meaning of SEX. Good find.

15d. [What a visitor might turn into] –– Again, great use of syntax. I kept thinking of a guest who had overstayed their welcome, but the answer had to do with the physical act of turning rather than a metaphorical transformation, leading to DRIVEWAY.

24d. [Ordeal for John Proctor] –– Flashy fill with WITCH TRIAL today; a great entry, in my opinion. Speaking of John Proctor, my younger sister recently started writing an essay about The Crucible. She, like many young writers, is prone to overusing the thesaurus. This is normally a relatively harmless habit, resulting only in a florid and thus somewhat inauthentic prose, but somewhere along the way, it managed to equate “accused” with “inoculated.” This led to the very silly sentence: “John Proctor stood with all the other inoculated people.” So, if anyone is interested in sponsoring a vaccination-themed Crucible rewrite, I’m currently garnering support.

Theme: Every theme leads with an apologetic word. 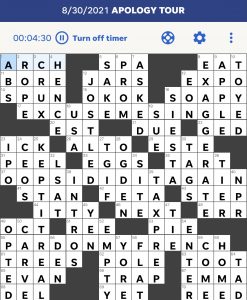 This was a perfect theme for a Monday. It was a nice, smooth fill, though I would have liked to see less redundancy with “hit” being repeated in EXCUSE ME SINGLE. Despite that, it was a fun sport reference that could easily be picked up on the crosses if you aren’t familiar. Of course, OOPS, I DID IT AGAIN is absolutely iconic.

The grid itself was a nice shape, with those two diagonal lines parting like the Red Sea for this morning’s anthem. I also appreciated the room it left for four-letter answers and the four six-letter columns in JOSTLED, SIESTA, INTROS, and TAX PREP.

Eye-catching clues for today include: