This week we’re told: The answer to this week’s contest crossword is a Best Picture-nominated film of the past 10 years. There are six long (and unusual) theme entries:

Adding one letter to the 2nd word of each themer forms a piece of clothing: 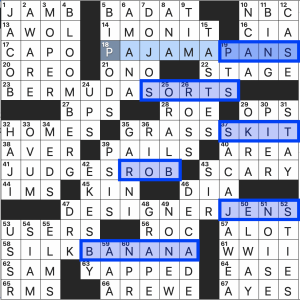 The missing letters form THREAD and some quick googling shows that our meta solution PHANTOM THREAD was nominated for best picture in 2017 (The Shape of Water won the award). We’ll end with Missing by Everything But The Girl.