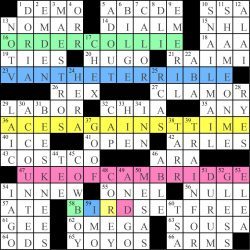 Good day, everyone! Just like that, we’re on the precipice of the best month of the year: September. Why? Well, that’s the month my birthday falls on, of course! That, and it’s time for me to cover the US Open tennis tournament, which I am doing for a seventh consecutive year as a member of the media. Yahoo! But, way more important that that, here is hoping you all have been doing well lately!

The bird flies the coop in today’s grid, with the first four theme entries being puns of common phrases and/or nouns that are created when removing the first letter of the phrase. The four letters removed, in order from top to bottom, are B-I-R-D, and that explains the reveal, BIRD SET FREE (58A: [2016 Sia song…and a hint to the puzzle theme]).

There is a decent chance that the intersection of SOUSA (63A: [“The March King”]) and DURUM was a tough one to parse (51D: [Pasta-maker’s wheat]). Was familiar with the former so that made that area not so tricky and was able to trust that “durum” was what was needed.  We have a stack of nine-letter down entries in the corners, with the ones in the northeast, SNAIL MAIL (10D: [Postal worker’s bagful]) and SHAME ON ME, being really delightful fill (11D: [“I’m so embarrassed…”]). I remember hearing “snail mail” for the first time and being completely lost as to what the person was talking about. If I remember, someone wanted my “snail mail addy” and I was like WTF?!? Thank goodness for Urban Dictionary! Though I should have put this on the graph below, here’s a fun fact about former American League Rookie of the Year (1997) and six-time All-Star NOMAR Garciaparra, aka Mr. Mia Hamm (13A: [Former Red Sox slugger Garciaparra]): He was given the name “Nomar” by his father, Ramon, because that is his father’s name backwards. No kidding!

“Sports will make you smarter” moment of the day: ABA (22D: [Lawyer’s org.]) – Anytime you watch an NBA game or an NBA showcase event, just think about how much the current game was influenced by some aspects of the league’s one-time rival, the American Basketball Association, or the ABA? The Slam Dunk contest? That started in the ABA? The three-point shot? Also an ABA creation. If you’ve heard of the Denver Nuggets, San Antonio Spurs, Indiana Pacers and/or Brooklyn Nets, know that all of those teams started in the ABA (the Brooklyn Nets were the New York Nets before they moved to New Jersey and then back into New York) before being absorbed in the ABA-NBA merger of 1976.

I’m not sure why a Christmas song-based theme is running in August, but here we are. The song in question is SILVER AND GOLD (54a, Seasonal Burl Ives song, and a hint to the circled letters]). Those circled letters that appear in each theme answer are the chemical symbols for the two metals. 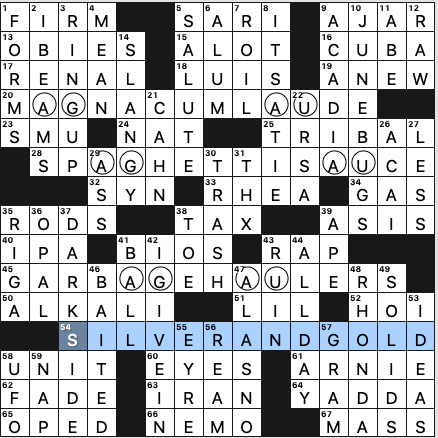 Solid theme, even though I don’t know anyone who uses the phrase “garbage hauler” on a regular basis. And to be truthful, I thought the phrase referred to the truck, not the person.

JUNEBUGS and (The) DARK SIDE top the fill along with “IT’S A TIE!” and “ALAS, NO.” I don’t know about “I GIVE IN.” It seems to me that more people would settle for the more concise “I give.”

One clue of note: 8d. [“Everybody wins!”]. IT’S A TIE. Really? Most people would probably have the feeling that everybody loses in that situation. Except this one, one of the most heartwarming, feel-good stories of the recent Olympics.

Good theme and a clean grid. 3.75 stars. And congrats to Steph Brown on her debut puzzle! 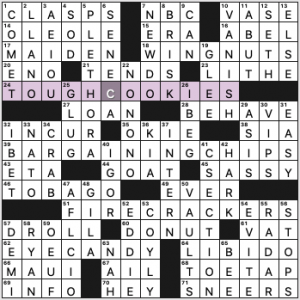 What a fun and fresh theme to chow down on! Familiar non-food phrases are clued as if they’re snack foods for a particular occupational demographic:

Toughest clue for me: 7d. [A cut above?], NEW DO. A cut above … your shoulders? A haircut that stands above your previous hairstyles and is thus a NEW DO? Not sure how this one is supposed to work.

Tough for Tuesday-solving newbies: ENO, LLANO, OEUF. LLANO gets plenty of use in the Spelling Bee puzzle, though!

THEME: Emotions can be found in common phrases reading downward. 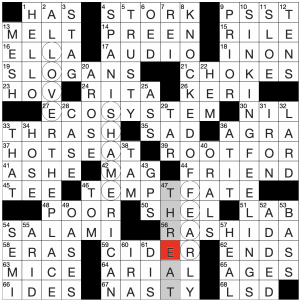 Fine work from the constructor, but this is a circle-dependent theme. Universal is unable at the present to include circles in its grids because… erm… they really, really like their current interface?

It may not matter much to people who frequent this site, but I’ve seen newer solvers first hand and on so many different occasions not understanding the directions (or forgetting them altogether as they focus on the parts of the puzzle that aren’t confusing) and completely miss the theme. Universal is such a good puzzle for hooking newer solvers, and their willingness to put blinders on and publish puzzles that are missing crucial (simple) features is mind-boggling.

The fact that they are publishing circles in an Across Lite version available solely from this website seems to be a direct acknowledgement that their widely published version is subpar.

Its very own webpage claims that the Universal “…sets the standard for all daily crosswords.” Are there any other crosswords clamoring to reach the standard of publishing two different versions of the same puzzle?

Solid work from David Williams. I wish it could be fully appreciated and accessible to all solvers the way it was to me. 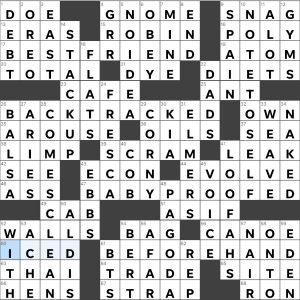 Theme: The word “bed” is split up in today’s themers, as “BE…D” in the first and last, and as “B…ED” for the second and third. Or another way to describe it is that the word “bed” contains (wraps around) the themer.

The title is an excellent hint for the today’s theme. The clue for BESTFRIEND is spot on. I like the including of “closest” because I’ve recently seen “BFF” (aka “best friend”) clued as “pal” and that just doesn’t ring true for me. BACKTRACKED took me a few crossings. BABYPROOFED is great, though I’ve also put cabinet locks on because our sly cat has been known to open some cabinets too! BEFOREHAND came to me right away, which is always a treat. Overall the theme is delightful. Looking at it again now, each themer is two words and the second and third are past tense. Very nice!

I was ready for CORNY this week, though my first instinct was still “punny”.

After finishing this puzzle, I have a crazing for some Thai food and either a Thai iced tea (given the stacking!) or as clued an iced matcha latte. A local Japanese bakery makes the best, though I’m partial to a hot matcha latte myself. 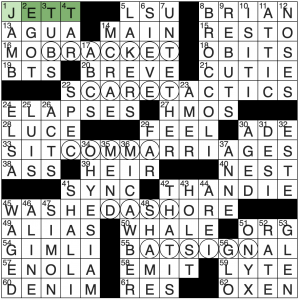 Each of the circles, as you can see, has a type of symbol that does appear on a standard keyboard. If there is some other significance, I am not seeing it. The bracket, comma and dash don’t appear over numbers, so I don’t think anything crazy is going on. If there is, please correct me! 4.4 stars for this one.

That is all! Another Jonesin’ next week (even though that will be near a holiday!) 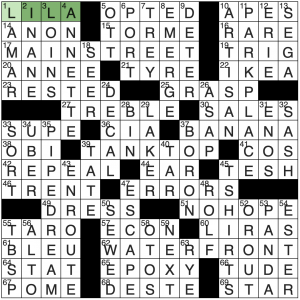 Did you figure out the theme before you got to the revealer at 62-Across? Yeah, me neither!

Very nicely done. Water main, water tank, you get the idea. And timely, in a way, since I hope you have spent at least a portion of your summer on the water! With the unofficial “close” of summer looming this weekend, perhaps you can do so if you haven’t already! But at least make sure you spend some time this weekend doing puzzles! I believe there will be a new Panda Magazine on Saturday, as well as Mark Halpin’s Labor Intensive puzzle suite as well. I, for one, will be busy! 4.3 stars from me.