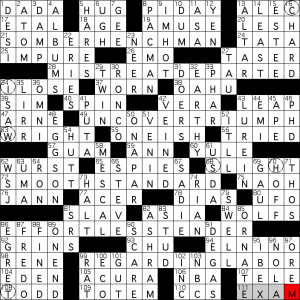 hello and welcome to episode #691 of matt gaffney’s weekly crossword contest, “Synonyms & Antonym”. the instructions for this week 4 puzzle tell us that we’re looking for a 6-letter word. okay. what are the theme answers? there are, in fact, six long across answers:

the numbers in the parentheticals don’t match up with the lengths of the words in the answer, so the logical thing to do, given the title, is to think about synonyms and antonyms. given that each of the themers is two words, and the “x + y ≠ z” formulation, i guessed that we might be trying to think of synonyms of each of the two words that had an antonym in common, with the x, y, and z providing the lengths of those synonyms.

the first one i figured out was EFFORTLESS TENDER, because a 4-letter synonym for EFFORTLESS really wanted to be EASY and TENDER suggested SOFT, both of which have a common antonym: HARD. so then i knew i was onto the right track. figuring out the others was still a lot of fun, though—and it helped that i knew i wasn’t going to reuse any synonyms from the theme clues:

so this was already a very pleasant brainteaser, but the meta’s not done yet, because what’s our 6-letter answer? logically, there ought to be a way to get one letter from each of these identifications. and there is, because the final common antonym is hidden in the grid, with one extra letter in front of it:

reading off those extra first letters gives SWITCH, which is the final answer to a really, really good meta. i really like the decision to include the final antonym, but neither of the implicit synonyms, in the grid—that made it feel more satisfying to figure out each little mini-puzzle, and plus there was already a lot going on in the grid with six long themers and six short themers, necessitating a 19×19 grid.

in the fill, i didn’t know {___-Mor (former discount drugstore chain)} PHAR, and i thought it was slightly awkward to have both {Martin or Harvey} STEVE and {1997 Nobel Prize winner Stephen} CHU in the grid but not cross-referenced. and actually, now that i’m looking at it, it’s steven chu, not stephen. but this is pretty minor stuff. overall, the puzzle was still quite brilliant and enjoyable.