Theme: Familiar phrases DROP THE BEAT (61a, [Demand to a DJ, and what you must do when entering the starred answers]). Those starred answers normally start with the word BEAT, but not in this grid. 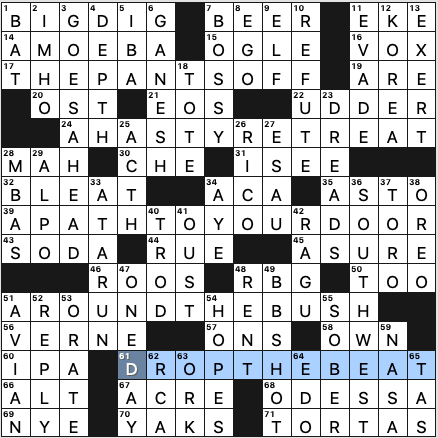 I thought this was pretty nifty. I wouldn’t have expected there to be so many colloquial phrases that start with the word BEAT, but there are even more than are presented here (a dead horse, to the punch, swords into plowshares, etc.).

The middle-ager in me wanted the revealer to be the Go-Go’s “We Got the Beat,” but I have to admit that DROP THE BEAT makes a better revealer. (That’s not going to stop me from embedding the new wave classic below.)

In the fill I like SOUTHWEST Airlines, Bob Marley’s DREADS, and Hindu god GANESH. I had a bit of trouble in that middle-southeast area with weird BB SHOT and ONS [Word with walk or carry] for which I wanted OFF and RENT [Fissure] for which I wanted RIFT. It took some doing to sort that out. And I’m glad I never really saw the clue [Hank who coached Oklahoma State basketball for 36 years] and got IBA strictly from the crossings. Same with ACTH [Pituitary secretion, in brief]. 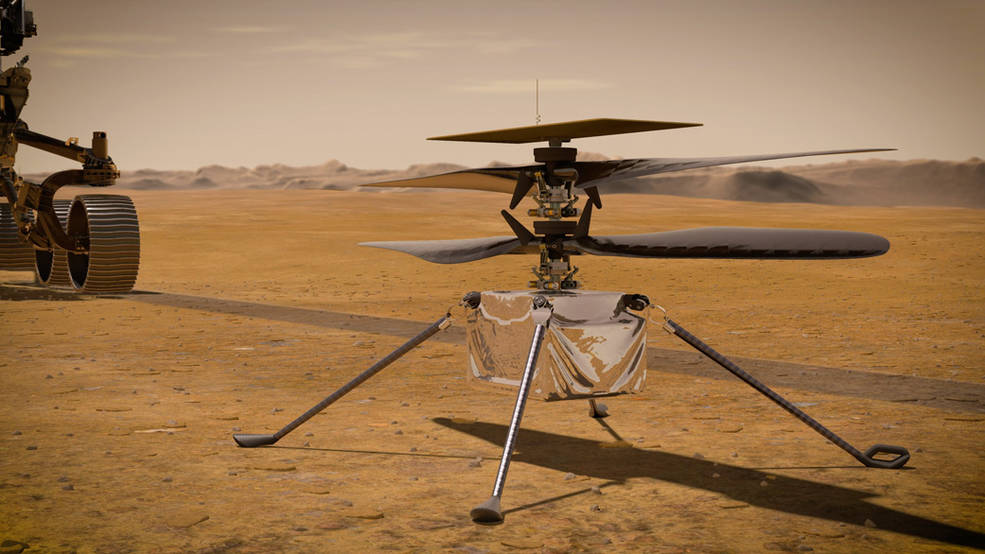 Clever theme that works well. The fill averages out to be, well, average. 3.6 stars. 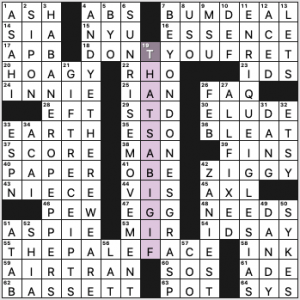 There’s only a mini-theme here, not the standard mid-week themed puzzle. The central Down is “THAT’S A BIG IF,” and that’s exactly what someone might say if they caught sight of the big IF made out of black squares in the middle of the grid. The rest of the puzzle plays like a themeless, with five 15-letter entries, plus pairs of 12s, 11s, and 8s. Tons of 3-letter words to facilitate the long Downs that parallel the big I and F.

I started the puzzle all wrong, trying to get one of the middle 15s to tumble. Nothing was coming to mind for those clues! So I switched to all those Across 3s and before you know it, the middle’s done.

Fave fill: BUM DEAL, “DON’T YOU FRET,” HOAGY Carmichael, the rock pairing of ZIGGY Stardust and AXL Rose, the great Angela BASSETT (if you like cop/firefighter/EMT drama and a definite soapy vibe, check out Bassett on 9-1-1; I’m hooked on the show!), HABANERO PEPPERS, GIFT RECEIPTS, “AND YET HERE WE ARE,” SUNRISE MOVEMENT, BEYOND ONE’S GRASP, ENRIQUE IGLESIAS, and Wanda SYKES.

Did not know: 55a. [1948 western starring Bob Hope as “Painless” Potter], THE PALEFACE. That word is disparaging, Merriam-Webster tells us, but (a) white people put it in the movie title, and (b) white people have not suffered ill effects of being called palefaces by the people they were genociding.

Theme: “Pear Down” – each theme answer contains the letters P E A R, literally going down the puzzle. Side note, this puzzle was edited by Amanda Rafkin! 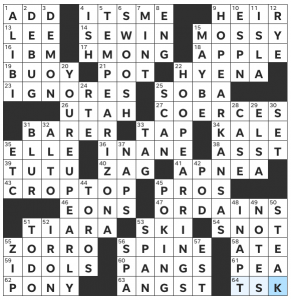 Fun puzzle today, although I wish the title worked as well when you read it as when you say it aloud (has USA Today done a straight “Pare Down” puzzle yet?) – since it’s not a real phrase it might give the game away a bit early. The last two theme answers really shine, but I didn’t love that the first two were both “city, state”, as it made the puzzle feel a bit repetitive and over-reliant on geography. I did appreciate that the P E A R was always spread across two words.

The grid felt very segmented to me today – there are a LOT of black squares, and it is difficult to move sideways across the puzzle. I always say that crossword construction is all about trade-offs, though, and today’s trade-off means that the fill that we do have is very clean. There were a lot of things mentioned in clues today that I had never heard of: LEE Kum Kee (13a, an Asian sauce company), tuj lub (17a, a traditional HMONG sport), and zongzi (58a, a rice dish) were all new to me. I was glad to see the difficulty in this puzzle increased by clues that might help the solver learn something as opposed to fill that might trip them up. 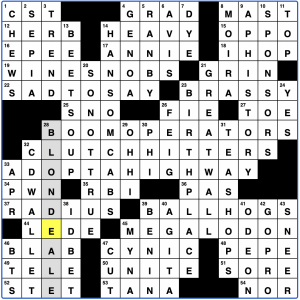 In reading the constructor info on this week’s puzzle, I had noticed that Matthew Stock had contributed a themeless to the AVCX before, but somehow missed that today’s puzzle was a 5/5 difficulty themeless as well until I was well into the middle of trying to figure out what the theme on this one was.  This absolutely earned its difficulty rating even if I was adding to it by trying to connect the dots on some of these entries for far too long.

Overal, it’s a lovely collab, and a challenging themeless as promised.

If you haven’t seen Samin Nosrat learn to make focaccia in Liguria (GENOA is Liguria’s capital and where focaccia comes from), it’s delightful. 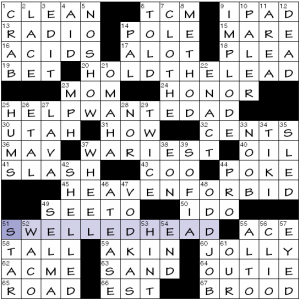 Theme’s good, title’s good. Not sold on the revealer, however.

I can kind of see how a ‘swelled’ head could be taken as a way to describe the expansion of those letters to the fringes of the phrases, but it’s—forgive the pun—a stretch.

From 1947, dead center of the Fibber McGee and Molly broadcast run: 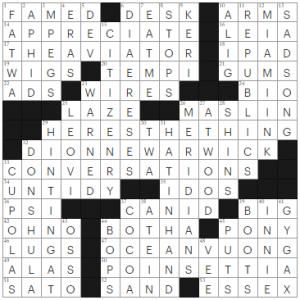 Whew, there is so much to like in Natan’s puzzle today, with eight 8+ letter downs crossing a central stairstack. Jam-packed with colorful entries (to my taste, at least) throughout.

Starting with that middle area, we’ve got HERES THE THING (29a- “Let me level with you . . .”), DIONNE WARWICK (32a- “Walk on By” singer), and CONVERSATIONS, with a clue that I absolutely adored (33a- Most of them are “monologues delivered in the presence of a witness,” per the mystery author Margaret Millar).

I’m not even sure that’s my favorite clue in the grid, though. Don’t miss (11d- Platonic ideals?) for REPUBLICS and (6d- Symbols for Charlotte and Emily Brontë) for DIAERESES, which doubles as a New Yorker in-joke.

My only trouble area was in the southeast, where MERIDIANS (26d- Acupuncturist’s pathways) crosses three names in addition to -WARWICK, but it wasn’t too touch a challenge.

I rarely speak to ratings, but 4.5 stars for me. 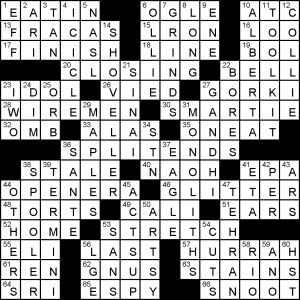 Today’s puzzle by Paul Coulter has a theme that is more intricate than most. The revealing answer is SPLITENDS. Each of four answer pairs are a specific sort of END: FINISH/LINE, CLOSING/BELL, HOME/STRETCH and LAST/HURRAH, and all of them are SPLIT into two parts. Snazzy!

Stacking the entry pairs on each other is an unusual design choice, and there are also only three entries longer than seven. These are probably what lead to NASL and oddly spelt SHOVELLER. The SHOVELLER, regardless of spelling, is something I personally think of primarily as a bird of genus Spatula. 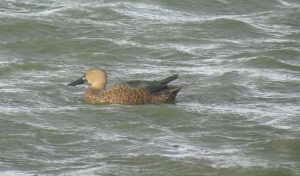 I don’t know if stacking OLLIE next to GRINDS was intentional, but it’s a cute touch.