Our theme features two-word familiar phrases in the vertical direction where one letter from the second word is “lifted” up to the top of the phrase (i.e. to the start of the first word) to create a new, wacky phrase. The letters in question spell out ORGAN, hence the title. 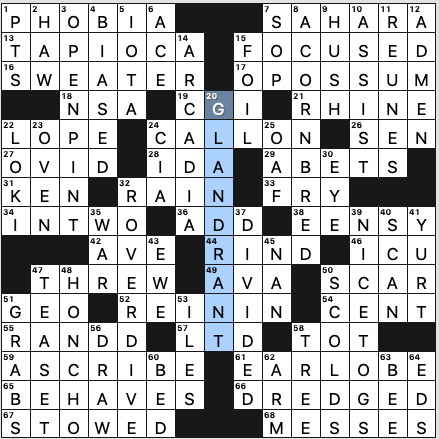 I cottoned on to the theme pretty quick after only resolving the second themer and was thus able to put in the rest of the ORGAN. That helped sort out the rest of the themers. I like the wordplay here, and the fact that only certain letters are lifted up tightens the theme. But nothing got me chuckling which is something I always hope for when a theme features crossword wackiness.

The corners of the grid are fairly wide open with stacks of 7s and include nice entries TAPIOCA, OPOSSUM, and EARLOBE, but there’s nothing longer to sink one’s teeth into. Could’ve done without tired entries REUNES and ADMEN. Didn’t know author Greg ILES, but I guess it’s a nice change of pace from cluing the entry as a plural French word.

I like the theme, I just didn’t find the clues and fill to be all that lively. 3.5 stars. 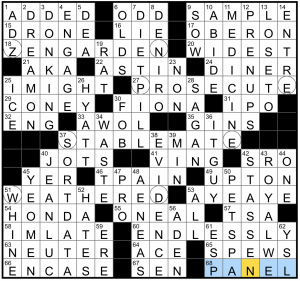 On first glance, it may not immediately be clear why the entries with circled squares have the clues they do:

These make MUCH more sense once you realize 60A asks you to think about the clues ENDLESSLY (“On and on … or how to read 18-, 27-, 37- and 51-Across to understand this puzzle’s theme?”).  This wasn’t too hard for me – once I realized EN GARDE would fit between the circled squares, it was just a hop, skip, and a jump to realizing that you can stick Z and N on the ends to make ZEN GARDEN.  Our other words that do fit the clues are ROSE CUT, TABLEMAT, and EAT HERE.

I spent a little too much time trying to figure out if other letters with rotational symmetry could be used in the squares to make this work for other clues, but that was just a little too specific to be the real theme.

FIONA Apple’s Fetch the Bolt Cutters album has been on my go-to playlist since it came out last year, and “Shameika” is one of its standouts.

Other lovely fill: the CONEY dog, VING Rhames, DON KING, Carl SAGAN, JEAN-LUC Picard.  One nitpick: you can definitely SORT DATA with a spreadsheet, but that feels weirdly unspecific to me when described as a “Spreadsheet command”.  OTOH, as someone who does a lot of data sorting in spreadsheets for a living, maybe that’s why I find it lacking when it comes to describing all that I do with regards to that.

Theme: “Follow The Money” – The first word of each theme answer can follow the word “money” in a common phrase. 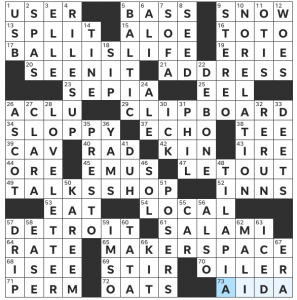 Great execution of a simple theme. I love the theme answers Neville selected – TALKS SHOP and BALL IS LIFE feel fresh and fun (especially to this ex-basketball player). Even the least “sparkly” answer, CLIPBOARD, is given a specific, evocative clue that still took a few crosses to uncover. I kept thinking that “creation location” was going to be a biblical reference for some reason?? So I was utterly delighted to see MAKERSPACE, which is a well known term to me and something I’m not sure if I’ve ever seen in a puzzle before. A great aha moment.

For me personally, there really were a 58d[Absence of snags] while solving this puzzle. The only real hold ups I had (besides the aforementioned MAKERSPACE snafu) were not knowing “Rosanna” was by TOTO and thinking that 22d[Fillet] was a noun and not a verb, which made it hard to see DEBONE. LOVE LETTER and NO RELATION are great bonus downs, and that’s in addition to a number of solid 6 and 7 letter entries: SEEN IT, PRESTO, SALAMI. There’s no section in this puzzle that has too many 3 letter answers or is so wide open a solver couldn’t get a foothold. Just well balanced, all around.

Theme: Each themed clue includes a term in the language of the country in the themed answer, making it the “local” way of saying that word or phrase while also playing on common sayings or pop culture references. 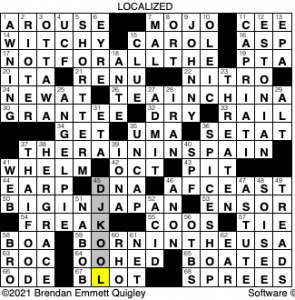 The more time I spend with this theme, the more I enjoy it. I definitely didn’t get it until I had all of the clues in front of me, so it didn’t necessarily help my solve. For those who may not be familiar with each language, this puzzle is really dependent on the crosses. This was strong for the most part. I felt like 37d [“It’s often served with satay sauce”] was weak for THAI FOOD because I kept wanting it to be a more specific item and 51d [“Multimillionaire”] NABOB was too niche of an answer. However, clues like 38d [“Address for a duchess”] HER GRACE and 5d [“Like most Airbnbs”] SHORT-TERM were a great combo of challenging but also great for getting especially the first halves of the answer.

As I’ve done more and more BEQ puzzles, I’ve really come to appreciate the variety of word-lengths in his grids, which, if you’ve read any of my reviews, you know matters quite a bit to me. When the themes are not as obvious at first – and BEQ always has really creative themes – I really love having those shorter answers to fall back on to chip away at the longer themers. Yet, at the same time, when I nail a longer answer, it makes a huge difference.

As always, here are a few other clues I wanted to mention:

That’s my ODE to BEQ for today! Also – as a side note – I’ve been listening to the Music to Play NYT Games by playlist on Spotify and absolutely would recommend as you’re doing your puzzles today. 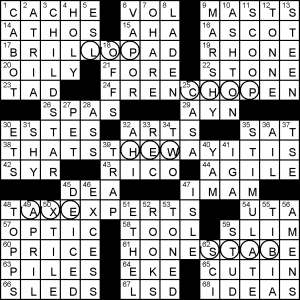 Today’s puzzle theme by George Jasper is a bit more paint-by-numbers. The revealer is the archaic CUTIN, and synonyms for CUT are somewhere IN four more answers: BRILlopAD, FRENchopEN, THATSThewAYITIS, TaxeXPERTS and HONEstabE.