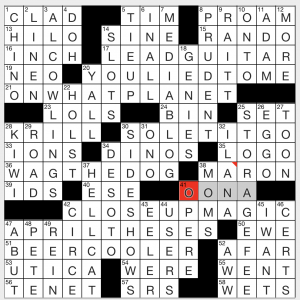 I thought I was going to love this puzzle but I only liked it. There were some entries that just didn’t resonate with me at all. Mainly these two:

Fave fill: LEAD GUITAR, “ON WHAT PLANET?”, WAG THE DOG, the pretty much new-to-me CLOSE-UP MAGIC, and SIDESHOWS. 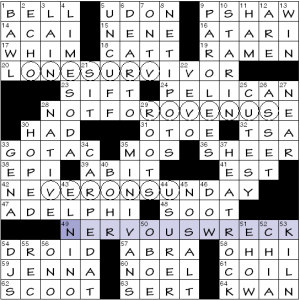 These are fantastic finds, so even though this is a rather common type of theme, it’s really well done. Somewhat distracting that two of the three are film titles. I’m sure an effort was made to find a third film title, but that’s a tall order.

You know, all along I was planning on embedding the best-known(?) song by NERVOUS Norvus, “Transfusion“, but (1) there wasn’t a hematological second clue/answer that I could hang it on, and (2) I thought of something better.

Spare some thought and maybe even some funds for the people suffering in New Orleans in the aftermath of Ida.

Theme: Familiar names and phrases are clued as if one of the words is a type of fish. 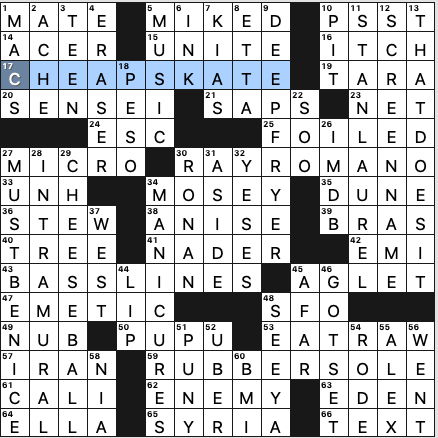 Easy and breezy. I like the fact that even though some of the fish come first and some come second, they are arranged symmetrically.

I’m loving the long fill today, especially that amazing NE stack with STAN LAUREL, SCREEN NAME, and “THAT DOES IT!” The SW corner ain’t no slouch either with “MUST BE NICE,” INTRAMURAL, and CHEESEBALL. And in the center we find DEEP FRYER and MANICURES. The price is paid with a few fusty entries like AGLET, UNH, and EMETIC, but overall, the solver comes out ahead. 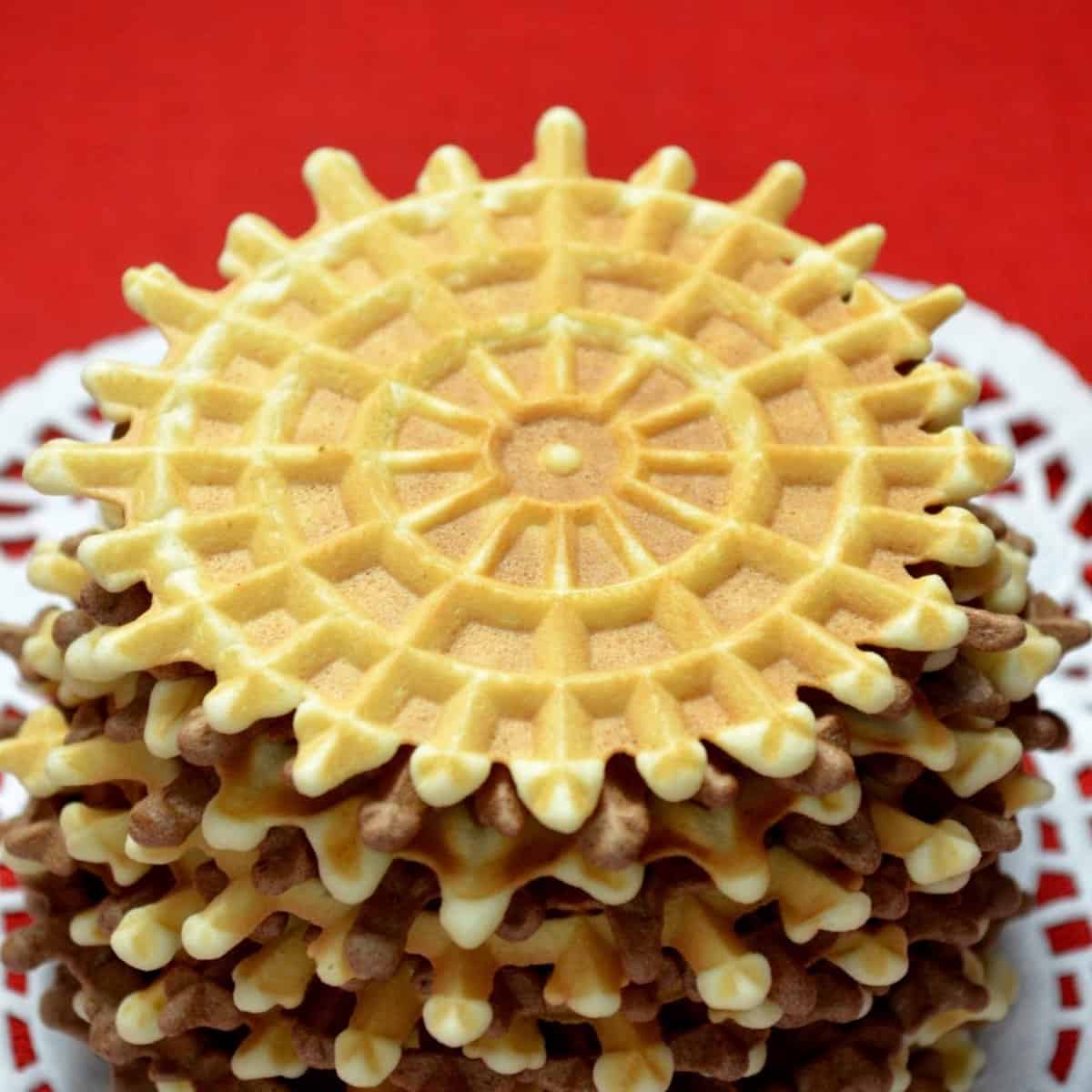 The theme feels a little on the light side, but that allows for a great set of sparkly fill. 3.75 stars. 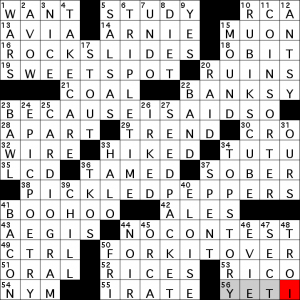 hello, joon here with the friday new yorker themeless by the always-excellent robyn weintraub, and what do you know? it’s excellent. for a couple of years, i’ve been in the habit of solving the new yorker themelesses downs-only, and although fridays are the easiest of the week, this was still an atypically fast friday for me. it did help a littl that i got an across clue due to the clue for 7d, {49-Across + Z, on a PC} which gave me both UNDO for 7d and CTRL for 49a. but it was more that the cluing was very gentle all-around, and i was especially grateful to be able to plunk down most of the tens on the first pass: {Meter for a minuet} TRIPLE TIME, {Multicolored toy named for its Hungarian inventor} RUBIK’S CUBE, {Works by Homer and Virgil, e.g.} EPIC POETRY, and {It might show a change of heart?} CARDIOGRAM. for {Small container for a gardener} i was able to suss out the SEED of SEED PACKET, and the rest came later; similarly for {It can help people deal with change} COIN SORTER i got COIN and waited for acrosses to materialize before getting SORTER. the only misstep i made on my first pass was trying USED for {Like all the stuff we own}, even though it did occur to me as i was writing it in, “but i’ve actually never even opened some of this crap”. lo and behold, the answer was actually OURS, and what i had thought was a casual “we” in the clue was subtly crucial.

robyn’s puzzles always have a lively, conversational feel, even in a downs-only solve. this puzzle’s long answers included BECAUSE I SAID SO and FORK IT OVER, balanced out by the somewhat more polite TAKE CARE. the cluing on some of these answers is also delightful and evocative without being especially tricky: {Facetious reply to “Are you asleep?”} YES made me laugh, and the snarky clue {“Aww, you poor thing . . .”} for BOO-HOO was a highlight of the across clues that i’m just seeing for the first time now.

oh, here’s another that i like: {Subatomic particle that made headlines in April for seemingly defying the standard model of particle physics} MUON. boy, the anomalous magnetic moment of the MUON was hot news in particle physics for a brief time—a very brief time, since the announcement of the newer, more precise measurement of the magnetic moment that seemed to be in conflict with the theoretical prediction was nearly simultaneous with the announcement of a refined theoretical calculation that did not, in fact, conflict with the new measurement. oh well.

last week in robyn’s friday puzzle in the new york times, we had seen PECK clued as {Unit of measure in a tongue twister}; today she’s gone bigger with {Veggies in a classic tongue twister} PICKLED PEPPERS. i am enjoying the slow reveal here across the weintraub extended universe. where do i submit my answer for the meta?

that’s all from me. thanks robyn as always for the puzzle!

Theme: Every theme answer includes another name for a water flow. 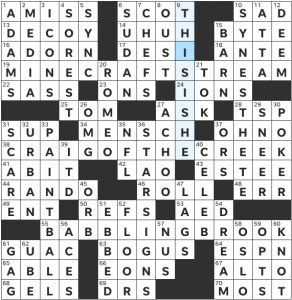 This theme checked all of my boxes. At first, I had no idea what any of the answers were, but once I cracked BABBLING BROOK (a fun one from constructor Brooke, in particular), I was able to fill in the ends of the other two with no problem. The theme answers also weren’t all references to specific bodies of water, so I didn’t have to brush up on my aquatic geography. It was especially fun that MINECRAFT STREAM not only referenced STREAM in its answer but also lava as its body of liquid in the clue itself.

Overall, this felt like a satisfying fill. I enjoyed the ANTE (18a [“Starting 30-Down bet”])/POKER (30d [“Game with flushes”]) combo as well as the 13a [“Fake duck, e.g.] (DECOY) and 61d [“Practical joke] (GAG) pairing. I also thought that SYNESTHETE (10d [“Person who might perceive color when they hear music”]) was a fun word for something I’d heard of before but didn’t know the term for it. It also paired well with its symmetric counterpart PAINTBALL in its reference as a [“Game with dye-filled capsules”] (33d).

Overall, great grid with plenty of OMG (26a [“aslkdfj wow”]) moments! I thought the theme answers were really fresh and fun, and it made for a great start to my day!

Elise brings her passion for STEM to the puzzle today with a fun rebus puzzle based on MASS. 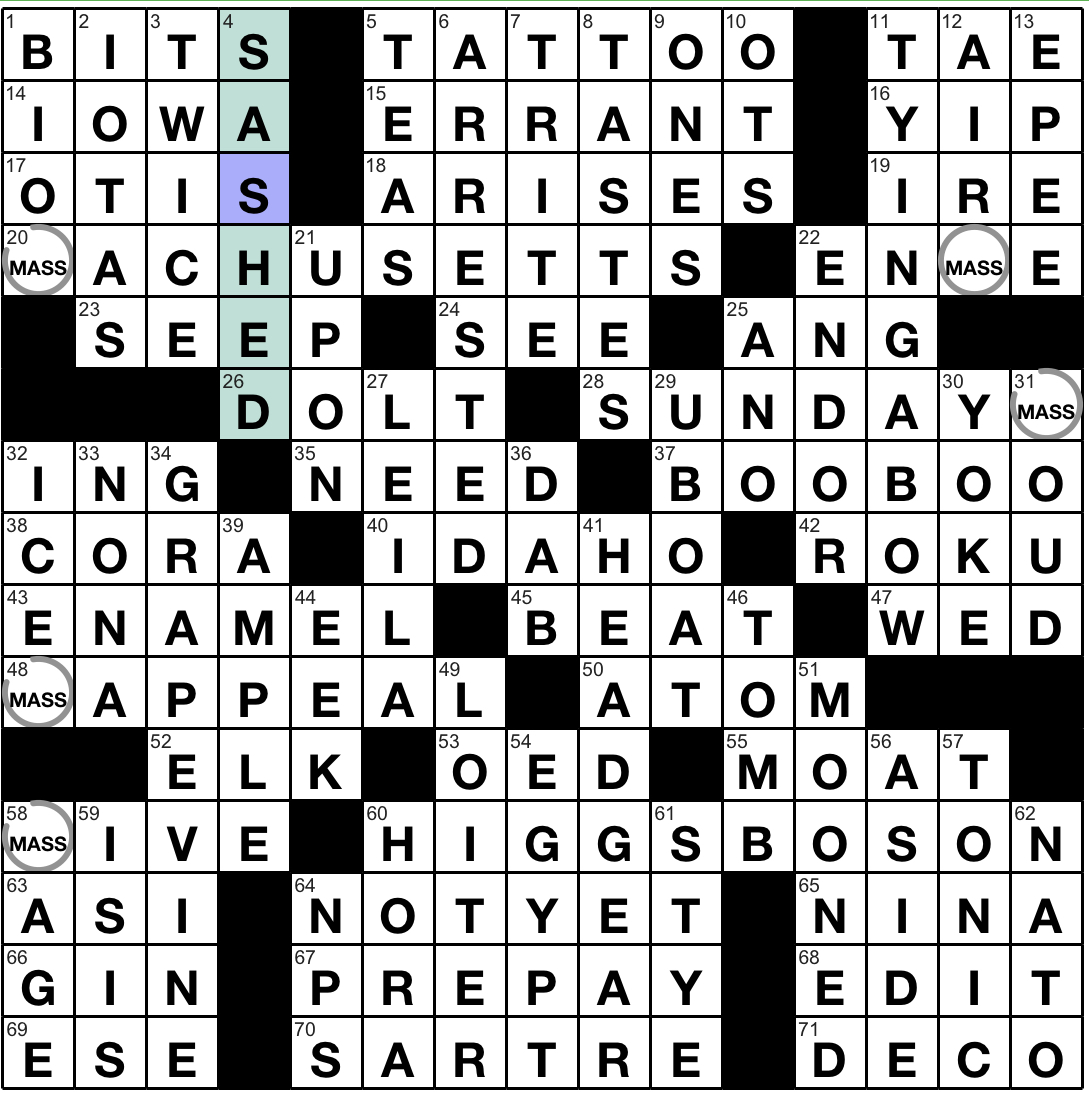 Quick write-up today. This was a lovely puzzle that serves as a great intro-to-rebus for newer solvers. Tricky if you haven’t seen a rebus before, but once you get the hang of the theme, it’s smooth sailing. I’m sure I would’ve appreciated the theme more if I was more science-inclined, but really I was just happy that I was able to pull HIGGS BOSON out of what seemed like thin air. I tend to prefer more symmetrical placement of rebus answers, but the volume of them in the grid was impressive enough that no points are lost on that account here.

And for ARRESTED Development, here are some great Lucille Bluth moments…