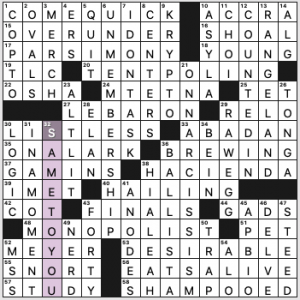 This 66-worder is pitched right to a good Saturday difficulty level, a bit harder than most. It’s got some really nice stuff in it, and some sort of iffy stuff. First up, my fave fill:

“COME QUICK!”, the OVER-UNDER (which I still don’t fully understand but I command you not to explain it in the comments), PARSIMONY, the TV business’s TENTPOLING (similar to what movie studios do), LISTLESS (it’s a whole vibe), “SAME TO YOU!”, and Freud’s ON NARCISSISM.

Not fully sold on “I DON’T ASK” as crossword fill, and UN MEMBERSHIP feels a little off balance, though I love the clue, 6d. [Access to a country club, in brief?].

Looks like a debut for Saswat Mishra today. Congrats! 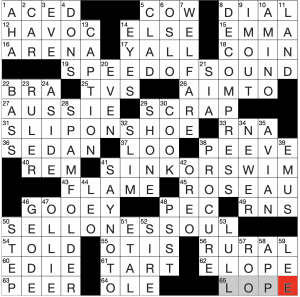 Not a helluva lot to say about it. The themers are mostly solid, if familiar. In this type of puzzle, I would desperately try to avoid the vague pronoun ONE’S as a featured theme answer, but no real harm done. 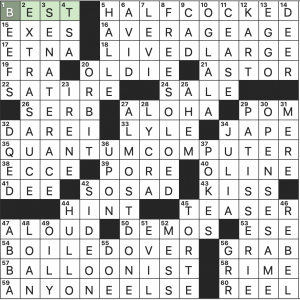 My friend Kyle has this holiday weekend challenge puzzle. This one was super smooth, and some of these entries literally made me chuckle out loud. I’ll try to mention those in the comments. I have a theory that these Saturday puzzles are either slightly easier because it is a holiday weekend, or slightly harder because you may or may not have more time. I still cannot tell! I would think most people would have LESS time, since they are likely out and about doing stuff. Anxious to hear what others think! But I enjoyed this puzzle, which is usually the case with a Kyle Dolan puzzle! 4.6 stars from me.

There is no Labor Intensive this year: bummer! But there is a Panda Magazine out today around noon my time. Enjoy some Kool & the Gang from the 1970’s! 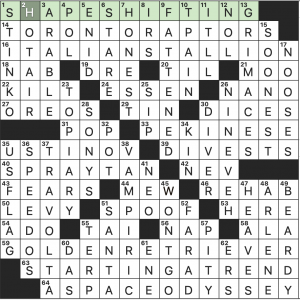 So Anna Stiga’s puzzles (“Stan Again” anagram, so this is Stan!) are usually easier, and that was true for most of this puzzle. I got super-stuck in the SE corner, though! I had the other 3/4 of the puzzle done rather quickly, but I stared at this area for what seemed like an eternity. There area a couple of tough wrinkles in there, but once I got an anchor entry in that corner, then it finally fell. Using Black Ink software today, that doesn’t show all my mistakes, so let’s just say there weren’t any! (Honestly, this was a fairly clean solve!) A solid 4.6 stars from me.

Everyone have a safe and healthy holiday weekend! 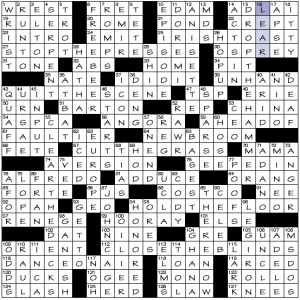 Is it May Day? No, it’s nigh on Labor Day, but it’s the same sentiment. Punnishing takes on phrases, couching them as calls for workers in certain industries to strike. Pains, indeed.

Some of these seem only marginally coherent, but I guess the theme works well enough. Not thrilled here, though.

Not part of the theme: 61a [Less likely to work] FAULTIER. 64a [Just-appointed manager who’s eager to shake things up] NEW BROOM. 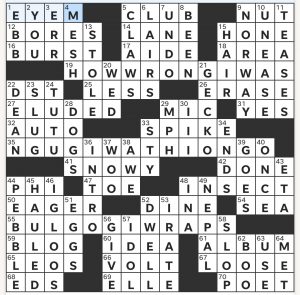 The theme is based off a Dreamgirls reference—one that I admittedly did not get—featured in the puzzle’s title “Turn the Wigs Around.” The theme answers all contain a backwards “WIG” (“GIW”), making 19a. HOW WRON(G I W)AS, 35a. NGŨ(GĨ W)A THIONG’O and 55a. BULGO(GI W)RAPS. Pretty consistently executed—I liked that the backwards WIG was hidden across multiple words each time. I do think that the theme could have leaned a bit more into the “turning” angle by finding words where a turned around WIG would change its meaning, but the letter combinations would have made that tricky. Since Saturday is the easiest day of the week for USA Today, I understand the inclination toward simplicity.

Familiar fill for me today, and very standardly clued to boot. I noticed a lot of opposite type clues today, (i.e. 12a. [Doesn’t interest] and 39d. [Doesn’t stay]) which was a bit of a disappointment only because they weren’t particularly interesting. I really liked 46d. [Shelters made with pukaangajuq] for IGLOOS, since it was a specific clue I hadn’t seen before. 21d. [Geico lizard] was a nice, fun clue for GECKO. Beyond that, nothing particularly exciting fill-wise. That isn’t necessarily a bad thing when the fill is, well, fillable in a grid, which this certainly was. Virtually no glue makes for a frictionless solve, and this puzzle accomplishes that.

That being said, the puzzle really was just meh. The theme was fine, the fill was fine, and the clues were fine, which altogether creates the perfect environment a boring solve. There’s nothing really specific I can point to, but it’s the absence of a wow factor that hurts the puzzle.