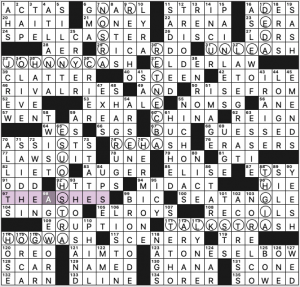 The theme revealer in this plus-sized 22×21 puzzle is 50a. [With 97-Across, emerge reborn … or what the ends of five Across answers in this puzzle do?], RISE FROM / THE ASHES. The other themers take a bend upwards into the grid, and their ending letters from A on can be switched to ASH to make a different, unclued answer:

Great theme, though it’s maybe too easy if you give away the mechanism in the theme revealer clue. I do like that the theme pairs contains plenty of lively entries. I’m always gonna like seeing HOGWASH or JOHNNY CASH in a puzzle, for example.

The constraints on the grid with the angled entries mean a lot of locked-down space, which typically means subpar fill. Having CRYER next to CRIER felt inelegant, and the ACT AS/plural AHS start to the puzzle put a bad taste in my mouth. And I don’t think I’ve ever seen 66a. [Some U.N. officers, for short], SGS. Secretaries general? SORER, bleh. There were just things that bugged me scattered throughout. I might’ve not noticed them if the opening corner had been great instead, you know? Sets the tone.

5d. [Something close to a colonel’s heart?], SILENT L. I need a linguist to weigh in on whether we call that a silent L when there’s an R sound there instead.

41d. [___ Minella (Muppet)], SAL. Oh! Did not know this. Delightful. My grandparents were friends with a couple named Sam and Della, and I never didn’t hear that as “salmonella.” Don’t eat over at their place!

Dinner is here, gotta go. Four stars for the theme, three for the fill.

Theme: Every themed answer in this puzzle includes a first and last name and each name begins with C, making their initials CC. The double letter combo refers to the (e)mail practice of carbon copying someone so that they receive a duplicate of the correspondence. 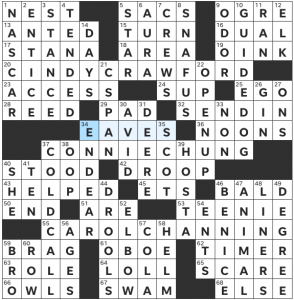 This theme was clean and easy to fill in, keeping my solve time for USA Today right around its usual. Once I got through the clues for CINDY CRAWFORD and CONNIE CHUNG, I knew that I was looking for C.C. names. There was also the nice bonus of 37d [“Tough task for a telemarketer”], which is the alliterative hint for COLD CALL. It not only played off of the first C for CONNIE CHUNG, but it also offered a fourth non-name C.C.

Grid-wise, the top right and bottom left corners were easy to fill on the Acrosses, so I didn’t even see the Down clues for them until I started working on my review. I thought that the upper left and bottom right sections were clued well and a nice balance to the shorter words in their opposite corners.

Overall, this was a smooth solve HELPED (43a [“Gave assistance”]) by its clever cluing and fun theme.

THEME: The word ROOM is missing from common phrases, resulting in wackiness. 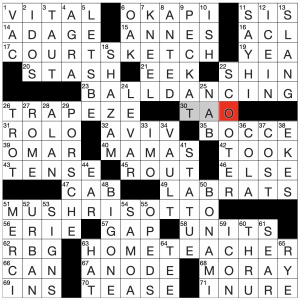 Fun idea, especially with a great title revealer. Some of the resulting wacky answers should be a bit further removed from the base phrases. For instance, HOME TEACHER and HOMEROOM TEACHER are pretty close in the sense that both are teachers. MUSHROOM RISOTTO and MUSH RISOTTO are still both Italian rice dishes (I’d also add that RISOTTO is, indeed, somewhat mushy). BALL DANCING is… weird. I guess my mind is in the gutter?

So while I like the idea, the entries don’t excite me all that much.

Not my favorite, but still a fun solve. 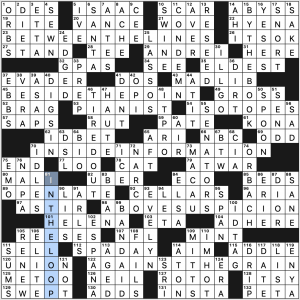 I liked these for the most part, especially as the puzzle went along. They definitely seemed stronger at the end. Too bad about INSIDE INFORMATION. It would have been nicer if another similar entry was used. It seems like there are plenty of alternative prepositions to turn to: on, off, over, under, below. How about [When U2 plays leapfrog, Bono jumps ___] OVER THE EDGE?

Enough silliness. There isn’t much in the grid in the way of long sparkly fill, no doubt because we have a fair amount of theme entries including some in the Down direction. We do have TIRED OUT and SENATORS as well as OPEN LATE and ISOTOPES. Nothing to scowl about, and that’s no small feat in a Sunday-sized grid.

Enjoyable theme. Fill is clean but not necessarily sparkly. 3.7 stars.

THEME: First letter of foods is deleted and clued wackily. The collective missing letters, in Birnholzian fashion, spell a revealer of sorts. 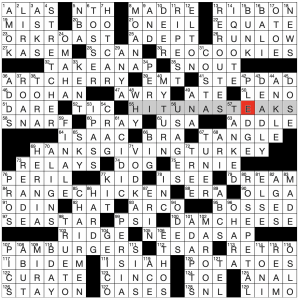 Remarkably tight, yet seemingly simple puzzle today. I don’t think I fully appreciated that all the theme entries were foods until near the end of the solve. Not sure how I missed that, but that’s a lot more fun than lopping the first letter off of any old phrase.

I did have a sense from the first entry that those missing letters would spell something (because Birnholz). That gimmick (wrong word… gimmick sounds tacky, but the correct word is eluding me) never fails to enhance the puzzle. Tried to guess it but once I figured out the first three letters (POT), my mind was thinking it had something to do with cookware.

Struggled in the middle east of the puzzle. Could not for the life of me do anything with the clue [Joint seen while wearing flip-flops] with AN?LE. Ran the alphabet twice. Poorly, obviously. A big forehead slapper as my mind never considered another definition of “joint.” Great clue. Couldn’t see DOSE or TANKED for a while either. Just a big f***in’ brainfart for me. 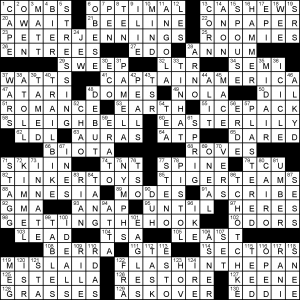 The title of today’s puzzle, “Parting Company”, is rather inscrutable. What I can see is there are circles in 8 theme entries that spell out JMBARRIE. In addition, those 8 entries each contain one half of four Neverland characters (none of the Darlings are included). The first and last entries, PETERjennings and flashinthePAN, form PETERPAN; two and seven are CAPTAINamerica and gettingtheHOOK; five and three are TINKERtoys and sleighBELL; six and four are TIGERteams and easterLILY.

About a third of my solving time was occupied finishing off the area below SKIIN. Not sure I’ve seen that before. Between names I wasn’t sure of, especially their spellings: STAGG (stang?), KIMMEL, INES (z?), and RIAN (not a Y?); opaque clues for INNATE, AMNESIA and LEAD and a phrase ___INGTHEHOOK that seemed like it could be any of many things stymied me for some time. However, my mistake was GTA/ASTO. Guess I don’t know my abbrs./Latin well enough!